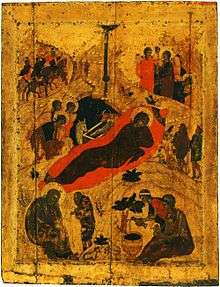 Nativity of the Lord, Icon by St. Andrei Rublev (1405), Cathedral of the Annunciation, Moscow Kremlin. 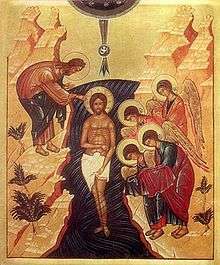 Icon of the Theophany of the Lord.

The members of the church chants verses of the bible which describes one powerful man's jealousy and fear during the service[2] This service takes its name from the fact that it used to be officially attended by the Emperor and his court at Hagia Sophia in Constantinople.[3] Because of the presence of the Emperor, there was a special singing of "Many Years" to the Emperor, the Imperial Court, and the Hierarchy. This singing of "Many Years" continues to this day (in modified form) in cathedrals and monasteries. By his presence, the Emperor acknowledged his submission to Christ the true King.

The three holy days on which the Royal Hours are celebrated were chosen as days in the church year which most particularly demonstrate Jesus' kenosis (self-emptying), and thus His true royal majesty.

According to Sacred Tradition, the Royal Hours of Great Friday were composed by St. Cyril (378 - 444), Patriarch of Alexandria.

The Royal Hours is an aggregate of five services, all served together as one:

For the Royal Hours, the priest vests in Epitrachelion[5] and Phelonion, and the deacon vests fully in Sticharion, Orarion and Epimanikia. The Holy Doors and Curtain are open for most of the service, and the Gospel Book is placed on an analogion (lectern) in the center of the Temple (church). At the beginning of each Hour the priest or deacon censes the Gospel, Icons and people.

At each of the Hours, one of the three fixed Psalms is replaced by a Psalm that is significant to the Feast being celebrated; the Troparion and Kontakion of the day are replaced by numerous hymns chanted by the choir; and each Hour has an Old Testament reading, a Prokeimenon, and an Epistle and Gospel.

There was a service of Royal Hours for Pentecost composed by the priest Nicholas Malaxus (fl. c. 1538), and published in 1568.[6] This service, however, has not come to wide usage in the Church.