Kontakion or Kondakion (Greek: κοντάκιον, transl. kontakion; Old Church Slavonic: Кондакъ, transl. Kondakə) is a form of hymn performed in the Orthodox Church and the Eastern Catholic Churches that follow the Byzantine Rite. There is also a chant book named after the hymn genre kontakion, the Kontakarion (Greek: κοντακάριον) or Kondakar (Old Church Slavonic: Кондакар). The kontakarion is not just a collection of kontakia: within the tradition of the Cathedral Rite (like the rite practiced at the Hagia Sophia of Constantinople) it became the name of the book of the prechanter or lampadarios, also now as "psaltikon", which contained all the soloistic parts of hymns sung during the morning service and the Divine Liturgy. Because the kontakia were usually sung by protopsaltes during the morning services, the first part for the morning service with its prokeimena and kontakia was the most voluminous part, so it was simply called kontakarion.

The word derives from the Greek word κόνταξ, kontax,[1] meaning pole, specifically the pole around which a scroll is wound. The term describes the way in which the words on a scroll unfurl as it is read. The word was originally used to describe an early Byzantine poetic form, whose origins date back certainly as far as the 6th century AD, and possibly earlier. 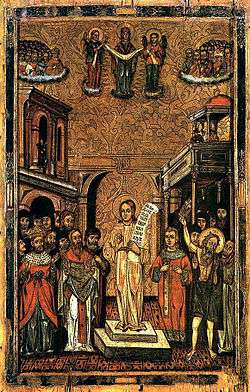 Tradition ascribes the origin of the kontakion to St. Romanos the Melodist during the 6th century. Certainly, Romanos' inspired compositions represent the apex of the Golden Age of Byzantine hymnography. His masterpiece is the kontakion for the Nativity of Christ. Up until the twelfth century, it was sung every year at the imperial banquet on that feast by the joint choirs of Hagia Sophia and of the Church of the Holy Apostles in Constantinople. Most of the poem takes the form of a dialogue between the Mother of God and the Magi.[note 1]

A “kontakion” is a poetic form frequently encountered in Byzantine hymnography. It was probably based in Syriac hymnographical traditions, which underwent an independent development in Greek-speaking Byzantium. It could best be described as a “sermon in verse accompanied by music”. In character it is similar to the early Byzantine festival sermons in prose—a genre developed by Ephrem the Syrian—but meter and music have greatly heightened the drama and rhetorical beauty of the speaker’s often profound and very rich meditation.

The form generally consists of 18 to 24 metrically identical stanzas called oikoi (“houses”), preceded, in a different meter, by a short prelude, called a koukoulion (“cowl”). The first letters of each of the stanzas form an acrostic, which frequently includes the name of the poet. The last line of the prelude introduces a refrain, which is repeated at the end of all the stanzas.

The main body of a kontakion was chanted from the ambo by a cleric (often a deacon; otherwise a reader) after the reading of the Gospel, while a choir, or even the whole congregation, joined in the refrain. The length of many kontakia—indeed, the epic character of some—suggest that the majority of the text must have been delivered in a kind of recitative, but unfortunately, the original music which accompanied the kontakia has now been lost.[2]

Over time, the performance of the kontakia came to be replaced by the canon. At the present time, the chanting of an entire kontakion is quite rare. Normally, only the first koukoulion (now referred to as “the kontakion”) and the first oikos are performed. The normal place for the kontakion and oikos is after the sixth ode of the canon; however, if the typicon for the day calls for more than one kontakion at matins, the kontakion and oikos of the more significant feast is sung after the sixth ode, while those of the less significant feast are transferred to the place following the third ode, before the kathismata.[3][4]

For the most part, the only time an entire kontakion is performed is when an Akathist Hymn is chanted. The original akathist was composed in honor of the Theotokos and is called simply "the Akathist" and is sung at matins on the fifth Saturday of Great Lent, which the Triodion identifies as the "Saturday of the Akathist".[5][6] Other akathists have been composed to Christ and to various saints as well; while not part of any prescribed service, these may be prayed as a devotional hymn at any time.

These are from the Prayer Book published by Holy Trinity Monastery (Jordanville, New York):

Though Thou didst descend into the grave, O Immortal One, yet didst Thou destroy the power of Hades, and didst arise as victory, O Christ God, calling to the myrrh-bearing women: Rejoice! and giving peace unto Thine apostles, Thou Who dost grant resurrection to the fallen.

Kontakion of the Annunciation of the Most Holy Theotokos:

To thee, the Champion Leader, we thy servants dedicate a feast of victory and of thanksgiving as ones rescued out of sufferings, O Theotokos; but as thou art one with might which is invincible, from all dangers that can be do thou deliver us, that we may cry to thee: Rejoice, thou Bride Unwedded.

On the mount Thou was transfigured, and Thy disciples, as much as they could bear, beheld Thy glory, O Christ God; so that when they should see Thee crucified, they would know Thy passion to be willing, and would preach to the world that Thou, in truth, art the Effulgence of the Father.

Kontakion of the Sunday of the Prodigal Son

Having foolishly abandoned Thy paternal glory, I squandered on vices the wealth which Thou gavest me. Wherefore, I cry unto Thee with the voice of the Prodigal: I have sinned before Thee, O compassionate Father. Receive me as one repentant, and make me as one of Thy hired servants.