The course lies in an arc of Crown Estate land on the east bank of the River Thames which includes Kew Gardens to the north and other parts of Old Deer Park to the south. The Old Deer Park sports ground, used by London Welsh RFC and other clubs, borders the east of the course.[1]

The course and club were established in 1892 and J. H. Taylor, one of the famous 'Great Triumvirate' of Braid, Taylor and Vardon, laid out the 36-hole golf course on the northern section of Old Deer Park Park. Prince George, Duke of Cambridge was the club's first president and the Royal connection continued when the Prince of Wales became captain in 1926.

Taylor remained based at the club until 1946 and, along with greenkeeper Peter Lees, developed many features to relieve the otherwise flat landscape. Taylor handed over the role of club professional to Henry Cotton who was succeeded by his assistant, Max Faulkner. Faulkner continued until 1953. Jimmy Adams took over on his return from Australia and held the post until 1969 when David Talbot commenced a long and distinguished run as professional lasting 47 years. Talbot was succeeded by his son, Philip in 1999.[3]

In March 2001 a fire destroyed the clubhouse and, with it, a substantial collection of memorabilia, portraits, pictures and trophies.[4] The building was replaced by a larger one and was opened in November 2003 by Prince Andrew, Duke of York.[3]

The course is divided into two 18-hole courses, an outer and inner course. 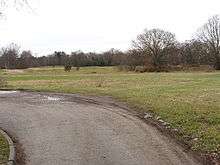 The course also has practice facilities and a pro shop.

This article is issued from Wikipedia - version of the 5/25/2014. The text is available under the Creative Commons Attribution/Share Alike but additional terms may apply for the media files.