This article is about the general definition of par on a golf hole. For the specific scoring system, see Par (golf scoring format). 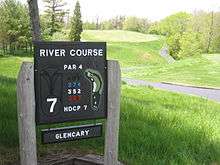 A sign at The River Course at Blackwolf Run in Kohler, Wisconsin, indicating that the seventh hole being played is a par-four

In golf, par is the predetermined number of strokes that a scratch (or 0 handicap)[1] golfer should require to complete a hole, a round (the sum of the pars of the played holes), or a tournament (the sum of the pars of each round). Pars are the central component of stroke play, the most common kind of play in professional golf tournaments. The term is also used in golf-like sports such as disc golf, with the same meaning.

The length of each hole from the tee placement to the pin mostly determines par values for each hole. Almost invariably, holes are assigned par values between three and five strokes. For a casual player from the middle tees, a par-three hole will be 100–250 yards (90–230 m) from the tee to the pin. Par-four holes are 250–470 yards (230–430 m), but tournament players will often encounter par-four holes 500 yards (460 m) or more, as it is common for short par-five holes for normal play to be turned into par-four holes in championship play. Par-five holes are typically 470–600 yards (430–550 m), but in the modern game holes of over 600 yards are becoming more common in championship play. Other relevant factors in setting the par for the hole include the terrain and obstacles (such as trees, water hazards, hills, or buildings) that may require a golfer to take more (or fewer) shots. Some golf courses feature par-sixes and, very rarely, par-sevens, but the latter are not recognised by the United States Golf Association.

Typical championship golf courses have par values of 72, comprising four par-threes, ten par-fours, and four par-fives. Championship course par can be as high as 73 to as low as 69. Most 18-hole courses not designed for championships have a par close to 72, but some will be lower. Courses with par above 73 are rare. Courses built on relatively small parcels of land will often be designed as"Par-3 Courses" in which every hole (or almost every hole) is a par-three (for a total par of 54 or slightly higher over 18 holes).

Tournament scores are reported by totalling scores relative to par in each round (there are usually four rounds in professional tournaments). If each of the four rounds has a par of 72, the tournament par would be 288. For example, a golfer could record a 70 in the first round, a 72 in the second round, a 73 in the third round, and a 69 in the fourth round. That would give a tournament score of 284, or "four-under-par."

Scores on each hole are reported in the same way that course scores are given. Names are commonly given to scores on holes relative to par.

Bogey means one shot more than par (+1). "Going round in bogey" originally meant an overall par score, starting at the Great Yarmouth Golf Club in 1890,[2] and based on the phrase "bogey man" and a popular music hall song Here Comes the Bogey Man. Nationally, players competed against Colonel Bogey, and this gave the title to a 1914 marching tune, Colonel Bogey March.[3]

As golf became more standardised in the United States, par scores were tightened and recreational golfers found themselves scoring over par, with bogey changing meaning to one-over-par. Bogeys are relatively common, even in professional play. It is considered somewhat noteworthy if a player manages to complete a bogey-free round. Bogeys are very common for many casual and club players.

More than one shot over par is known as a double-bogey (+2), triple-bogey (+3), and so on. However, it is more common to hear higher scores referred to simply by the number of strokes rather than by name. For example, a player having taken eight shots to negotiate a par-three, would be far more likely to refer to it as an "eight" or being "five-over-par", rather than a "quintuple-bogey". Double-bogeys and worse scores are uncommon for top performers in professional play.

Par means scoring even (E). The golfer has taken as many strokes as the hole's par number. In theory, pars are achieved by two putts, with the remaining shots being used to reach the green. Reaching the green in two strokes fewer than the hole's par is called achieving a "green in regulation." For example, to reach the green of a par-five hole in regulation, the player would take three (or fewer) strokes, with the other two strokes allocated for putting the ball into the hole. Par derives its name from the Latin for equal.

Birdie means scoring one under par (−1). This expression was coined in 1899, at the Atlantic City Country Club in Northfield, New Jersey. It seems that one day in 1899, three golfers, George Crump (who later built Pine Valley, about 45 miles away), William Poultney Smith (founding member of Pine Valley), and his brother Ab Smith, were playing together when Crump hit his second shot only inches from the cup on a par-four hole after his first shot had struck a bird in flight. Simultaneously, the Smith brothers exclaimed that Crump's shot was "a bird." Crump's short putt left him one-under-par for the hole, and from that day, the three of them referred to such a score as a "birdie." In short order, the entire membership of the club began using the term. As the Atlantic City Country Club, being a resort, had many out-of-town visitors, the expression spread and caught the fancy of all American golfers.[4] The perfect round (score of 54 on a par-72 course) is most commonly described as scoring a birdie on all 18 holes,[5][6] but no player has ever recorded a perfect round in a professional tournament.

During the 2009 RBC Canadian Open, Mark Calcavecchia scored nine consecutive birdies at the second round, breaking the PGA Tour record.[7]

Eagle means scoring two under par (−2). Eagles usually occur when golfers hit the ball far enough to reach the green with fewer strokes than expected. It most commonly happens on par-fives but can occur on short par-fours. A hole in one on a par-three hole also results in an eagle. The name "eagle" was used as a large bird representing a better score than a birdie.[2]

See also: List of professional golfers who have hit an albatross

Albatross means three shots under par (−3) (the albatross being one of the largest birds); also called a double eagle in the US. It is an extremely rare score and occurs most commonly on par-fives with a strong drive and a holed approach shot. Holes-in-one on par-four holes (generally short ones) are also albatrosses. The first famous albatross was made by Gene Sarazen in 1935 on the 15th hole at Augusta National Golf Club during the final round of the Masters Tournament. It vaulted him into a tie for first place and forced a playoff, which he won the next day. The sportswriters of the day termed it "the shot heard 'round the world." Albatrosses are much rarer than par-3 holes-in-one; the odds are estimated at one in 1,000,000: the odds of a hole-in-one are around one in 3,700 to one in 12,500, depending on the hole and skill.[8]

See also: Hole in one § Holes-in-one on Par 5 (and higher) holes

Condor means scoring four under par (−4). This is the lowest individual hole score ever made. A condor would be a hole-in-one on a par-five (typically by cutting over a dogleg corner) or a two on a par-six (which had never been achieved, as of October 2008), and so on.[15] Par-sixes are exceptionally rare,[16][17] as are par-sevens.[18][19]). As of October 2008, a condor had been recorded only four times, only once on a straight drive (a record 517 yards or 473 metres, aided by the thin air by the high altitude at Denver) rather than cutting a dogleg and never during a professional tournament.[15]

A condor is also known as a double albatross, or a triple eagle,[15][20] and the convention can, in principle, be extended to name other hypothetical scores such as five under par. For instance, a hole in one by cutting the corner on a doglegged or horseshoe-shaped par 6, which under the convention would be a double condor, a triple albatross, or a quadruple eagle, but it might also be given the name of some other bird.