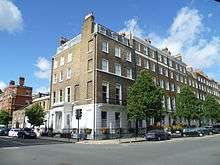 The premises of the Royal Philatelic Society London at 41 Devonshire Place on the corner with Devonshire Street. 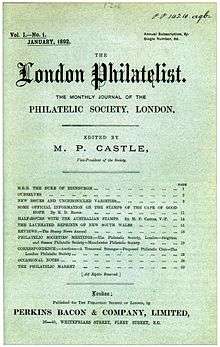 Permission to use the prefix "Royal" was granted by King Edward VII in November 1906.[2] The current patron is Her Majesty Queen Elizabeth II. Every September, at a special meeting of the Society, part of the Royal Philatelic Collection is displayed by its Keeper. Queen Elizabeth is not known to be a philatelist herself, but the royal family has maintained and added to the collection passed down by Edward VII.

"The Royal," as it is known, has members in dozens of countries, with the highest numbers of members in the United Kingdom and the United States. Members are in two classes, Fellows and Members. Fellows are elected from among Members based on service to the Royal. The Society publishes a journal, The London Philatelist, which includes articles, book reviews, society news, advertisements, and other items.

The principal objects of the Society are:

1. To promote, encourage and contribute to the advancement of the science and practice of philately.

2. To inform members of the Society on all matters affecting any of its objects by meetings, discussions, displays, lectures, correspondence or otherwise; to assist and carry out philatelic research, and to print, publish and issue such papers, periodicals, books, circulars or other literary matters in support of these objects.

3. To hold, either alone or jointly with others, promote, or subscribe, or assist with international or other philatelic exhibitions in the UK or elsewhere, and to offer and award prizes, medals or other recognition in connection with such exhibitions or for any literary work connected with philately.

4. To establish and maintain a library and collections of stamps, designs, proofs, essays and other articles of interest relating to any of the objects of the Society.

The society awards the Crawford Medal for the most valuable and original contribution to the study and knowledge of philately published in book form during the two years preceding the award.