This article is about the currency used in various countries in Asia. For other uses, see Rupee (disambiguation).

Countries where the rupee is the name of the official currency

The rupee is the common name for the currencies of India, Indonesia, Maldives, Mauritius, Nepal, Pakistan, Seychelles, Sri Lanka, and formerly those of Afghanistan, Burma and British East Africa and German East Africa.

In the Maldives, the unit of currency is known as the rufiyah, which is a cognate of the Sanskrit rupiya. The Indian rupees (₹) and Pakistani rupees (₨) are subdivided into one hundred paise (singular paisa) or pice. The Mauritian and Sri Lankan rupees subdivide into 100 cents. The Nepalese rupee subdivides into one hundred paisas (both singular and plural) or four sukas or two mohors.

The word "rupee" is derived from the Sanskrit term rūpya which means "wrought silver, a coin of silver",[1] in origin an adjective meaning "shapely", with a more specific meaning of "stamped, impressed", whence "coin". It is derived from the noun rūpa "shape, likeness, image". The word rūpa is further identified as having sprung from the Dravidian root uruppu, which means "a member of the body".[2]

Further information: History of the rupee

Silver coin of the Maurya Empire, known as rupyarupa, with symbols of wheel and elephant. 3rd century BC. 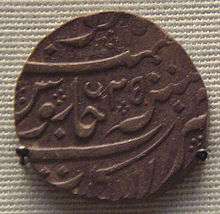 The Indian rupee was first introduced, issued and termed as rupiya, the silver coin, by Sher Shah Suri (1540–1545), continued by the Mughal rulers.[5] The history of the rupee traces back to Ancient India circa 3rd century BC. Ancient India was one of the earliest issuers of coins in the world,[6] along with the Lydian staters, several other Middle Eastern coinages and the Chinese wen. The term is from rūpya, a Sanskrit term for silver coin,[7] from Sanskrit rūpá, beautiful form.[8]

The Indian rupee was the official currency of Dubai and Qatar until 1959, when India created a new Gulf rupee (also known as the "external rupee") to hinder the smuggling of gold.[10] The Gulf rupee was legal tender until 1966, when India significantly devalued the Indian rupee and a new Qatar-Dubai riyal was established to provide economic stability.[10]

The rise in the price of silver immediately after the first world war caused the rupee to rise in value to two shillings sterling. In 1920 in British East Africa, the opportunity was then taken to introduce a new florin coin, hence bringing the currency into line with sterling. Shortly after that, the florin was split into two East African shillings. This assimilation to sterling did not, however, happen in British India itself. In Somalia, the Italian colonial authority minted 'rupia' to exactly the same standard, and called the pice 'besa'.

Formerly, the rupee (11.66 g, .917 fine silver) was divided into 16 annas, 64 paise, or 192 pies. Each circulating coin of British India, until the rupee was decimalised, had a different name in practice. A paisa was equal to two dhelas, three pies and six damaris. Other coins for two paisas (taka), two annas (dawanni), four annas (a chawanni, or a quarter of a rupee), eight annas (an atthanni, or half a rupee) were widely in use until decimalization in 1961. The names of these coins denote the numeral of their value in annas in Urdu, except taka (two paisas or half an anna). While the word taka was commonly used in East Pakistan (now Bangladesh), alternatively for rupee, the two-paise coin was called a taka in West Pakistan.

Tanka is an ancient Sanskrit word for money. As the value of rupee rapidly eroded over the years, minting of the fractions of decimalized rupee has been completely abandoned. Presently, bank notes and some coins of 5 and 10 rupees are rarely in use and the paper currency is the sole method of any cash transaction. All fractions of the rupee are of only historical significance and no fractions are in use at all. A taka in West Pakistan was worth two paises while this word was used alternatively for rupee in East Pakistan. After its independence, Bangladesh started to officially call its currency "taka" (BDT) in 1971.

Early 19th-century East India Company rupees were used in Australia for a limited period. Decimalisation occurred in Ceylon (Sri Lanka) in 1969, in India in 1957, and in Pakistan in 1961. Thus, an Indian rupee is now divided into 100 paise. Paisa is sometimes referred to as naya paisa, meaning the "new-money" in India, a habit continued from when India became independent—when the new country introduced new currency, people used naya paisa to distinguish it from the old currency. The issuance of the Indian currency is controlled by the Reserve Bank of India, whereas in Pakistan it is controlled by State Bank of Pakistan. The most commonly used symbol for the rupee is "Rs". India adopted a new symbol (₹) for the Indian rupee on 15 July 2010.

In most parts of India, the rupee is known as rupaya, rupaye, or one of several other terms derived from the Sanskrit rupya, meaning silver. However, in the Bengali and Assamese languages, spoken in Assam, Tripura, and West Bengal, the rupee is known as a taka, and is written as such on Indian banknotes. In Odisha it is known as tanka. In India, currency is issued in denominations of 1, 2, 5, 10, 20, 50, 100, 500 and 2000 rupees.

The rupee sign "₨" is a currency sign used to represent the monetary unit of account in Sri Lanka, Nepal, Mauritius, Seychelles, Pakistan and the Maldives. It resembles, and is often written as, the Latin character sequence "Rs" or "Rs.".

The rupee sign is encoded in the Unicode character set at U+20A8 (some fonts, such as Microsoft Sans Serif, instead display the Unicode rupee sign erroneously as “Rp”). It is common to find a prefix before the digits denoting the rupee currency value written as "Re: 1" (for one unit), or "Rs. 140" (for more than one rupee). The rupee sign was also formerly used to represent the Indian rupee until July 15, 2010, when it was replaced by a new currency symbol, ₹. The Indian rupee is represented by the Indian rupee sign, ₹. The new sign is a combination of the Devanagari letter र (ra) and the Latin capital letter R without its vertical bar (similar to the R rotunda). The parallel lines at the top (with white space between them) are said to make an allusion to the tricolor Indian flag.[11] and also depict an equality sign that symbolizes the nation's desire to reduce economic disparity.

"Rupee" is abbreviated as Re. (singular), Rs. (plural), and, in the case of the Indian rupee, ₹ (Indian rupee symbol). The Sri Lankan rupee also uses the symbol "රු" in Sinhala.

See also: History of the rupee

The history of the rupees can be traced back to Ancient India around the 6th century BC. Ancient India had some of the earliest coins in the world,[6] along with the Chinese wen and Lydian staters. The rupee coin has been used since then, even during British India, when it contained 11.66 g of 91.7% silver with an ASW of 0.3437 of a Troy ounce[12] (that is, silver worth about US$10 at modern prices).[13] At the end of the 19th century, the Indian silver rupee went onto a gold exchange standard at a fixed rate of one rupee to one shilling and fourpence in British currency, i.e. 15 rupees to 1 pound sterling.

Valuation of the rupee based on its silver content had severe consequences in the 19th century, when the strongest economies in the world were on the gold standard. The discovery of vast quantities of silver in the United States and various European colonies resulted in a decline in the value of silver relative to gold.