Rymill Park, also known as Park 14 or Mullawirraburka in Kaurna, is a recreation park located in the East Parklands of the South Australian capital of Adelaide. It is bordered by East and Dequetteville Terraces, and Rundle and Bartels Roads. It is in close proximity to the Adelaide Botanic Garden, Hutt Street, and Victoria Park.[1][2] 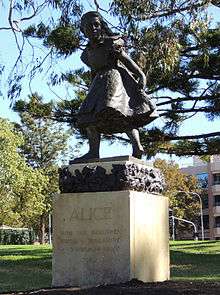 The park occupies 14.5 hectares (36 acres), and is named after Sir Arthur Rymill, Lord Mayor of Adelaide from 1950 to 1954 and council member for 23 years. The lake was constructed in 1959 and the rose gardens were created in the 1960s by excavating what was then the Bartels Road rubbish tip.[3] Rowboats are available for hire at the park's kiosk, exclusively for use on the park's lake.[4] Other features of the park include rose gardens, playgrounds,[5] avenues of well established trees, barbecue facilities and a statue of Alice, inspired by Lewis Carroll's stories for children.[1]

The park has been a site for many cultural and sporting events including Carnevale in Adelaide, the Adelaide International Horse Trials, Aerobic Challenge[6] and various events in the Adelaide Festival,[7][8] Adelaide Fringe and Feast festivals.

In 2015, a plan to realign Rundle Road as part of a plan to extend O-Bahn bus services to and from the city of Adelaide created controversy. The plan would result in the removal of numerous long established regulated and significant trees. Critics of the plan included Mark Parnell MLC, Nick Xenophon and former Australian Democrats leader, Ian Gilfillan. Public objections to the redevelopment prompted the creation of the Rymill Park Alliance[10] and the Save Adelaide's Rymill Park campaign[11] and Facebook page.[12]

Many of the park's larger trees provide hollows and roosts which are utilised by various species for nesting and residence. Native birds species commonly seen in the park include crested pidgeons, magpies, magpie-larks, eastern rosellas, rainbow lorikeets, Australian white ibis and various species of duck. Ducks are present year-round at the artificial lake which provides a permanent water source. Pacific black ducks and Australian wood ducks are the most commonly sighted species.[13]

Marsupials such as the brushtail possum rest in tree hollows by day and emerge at night to forage and feed.

This article is issued from Wikipedia - version of the 3/25/2016. The text is available under the Creative Commons Attribution/Share Alike but additional terms may apply for the media files.