S. Thomas' College, Mount Lavinia (STC) is a selective entry boys' private Anglican school providing primary and secondary education in Sri Lanka. It is considered to be one of the most prestigious schools in the country and its former pupils include four former Prime Ministers of Sri Lanka.[1] S. Thomas’ College was founded by the first Bishop of Colombo, the Rt. Rev. James Chapman, D. D. It was his foremost vision to build a College & Cathedral for the new Diocese of Colombo of the Church of Ceylon. Thus on the 3rd of February 1851 the College of St .Thomas the Apostle, Colombo was opened with the objective of training a Christian Clergy and to make Children good citizens under the discipline & supervision of Christianity.

S. Thomas' College dates back to 1851 when it was founded in Mutwal as the College of St .Thomas the Apostle, Colombo.[2][3][4][5][6][7] The Rt. Rev. James Chapman, the first Bishop of Colombo, started the school to train Christian clergy and "to make children good citizens under the discipline and supervision of Christianity".[8] An old boy of Eton College, Bishop Chapman founded the college on the Etonian model, and even borrowed the school motto, Esto Perpetua from the prestigious English Public School.[9] In 1852 Bishop Chapman laid the foundation stone of the college chapel on a hill in the school grounds. The chapel became Christ Church Cathedral of the Colombo Diocese of the Church of Ceylon when it was dedicated on 21 September 1854.[10] 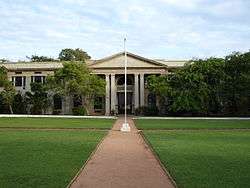 In 1918, the school moved away from the "dusty environs" of Mutwal, which was near the Colombo harbour, to a more picturesque location near the sea in Mount Lavinia.[11] Here, on 13 October 1923, the foundation stone for what would become The Chapel of the Transfiguration was laid by the Bishop of Colombo, Rt. Rev. Ernest Arthur Copleston, and the chapel was completed on 12 February 1927, when it was consecrated by the Rt. Rev. Mark Carpenter-Garnier, Bishop of Colombo.[12] In 1968, well known Sri Lankan artist David Paynter completed his mural of the Transfiguration of Jesus upon the interior of the East wall of the chapel, which included a then unusual "beardless Christ".[13]

The College consists of three schools - Upper, Middle, and Lower and the College Forms.

There are 5 Houses at STC, four of which are "day houses", for those who do not live in the Boarding House. It was in the time of Warden McPherson that an organized house system was introduced, so to encourage boys to take part in extracurricular activities. In 1926, the day boys were divided first into 5 houses, namely Wood, Buck, Stone, De Saram, and Miller-Copleston. Boys were allotted in them according to the location of their residences. Wood house consisted of boys from Ratmalana, further south and from Nugegoda and Borella. Stone and Buck housed children from Mount Lavinia, the former consisting of those whose surnames starts from A to M, while the latter of the rest. Baly housed boys who lived in Wellawatte and Bambalapitiya. Children who were from Dehiwala, Slave Island & Fort were allotted in Jermyn House. This system was not found successful.

The College has many sports and games for its students.

The most prominent sports are those classified as the "Royal-Thomian". These sports take precedence because of the importance given to the clash between S. Thomas' oldest rival, the Royal College, Colombo.

A cricket match between these colleges takes place in the first term of Lent every year. As the rains begin in Michaelmas Term, the rugby season has kicked off and the main encounter is the Royal-Thomian Rugby match. As the year ends with the term of Yuletide, the highlights are the Royal Thomian Regatta and the Boat Race for the oarsmen of the two Colleges and simultaneously the two leg Water Polo encounter for the R.L. Hayman trophy.[15]

A Thomian flag at the 129th Royal Thomian

The Royal-Thomian, is the annual cricket match between the Royal College, Colombo and S Thomas' College, Mt Lavinia is the second longest uninterrupted cricket match series in the world and, first and oldest in Sri Lanka, even older than the Ashes, having been played for more than 130 years continuously.[16] The original match was played between the Colombo Academy and S. Thomas' College, Mutwal[17][18][19][20][21][22][23][24][25][26][27] in 1879, with schoolmasters participating as well as schoolboys. From 1880 onwards, only schoolboys were allowed to play in the match. The match is played for the D.S. Senanayake Memorial Shield, which was first presented in 1928. From 1979 matches were played for 3 days except in 1985 which was a 2-day match. A limited overs match (50 overs) was introduced in 1975 and is played for Mustangs Trophy.

The Royal Thomian rugby encounter held annually in the Michaelmas Term of S. Thomas. and between the two sessions of Bradby Shield Encounter of Royal since 1955. It is played for the Michael Gunaratne Trophy.

The Royal-Thomian Regatta (or Boat Race) is the annual rowing race between Royal College, Colombo and S. Thomas' College, Mt Lavinia, having begun in 1962 the event has evolved into the Royal Thomian Regatta or The Regatta in 1966 and now is made up of 8 events which carry points and 3 exhibition events. The races are rowed over a distance of 1000 yards and take place on the Beira Lake in Colombo. The regatta takes place in the month of October and is usually held on the last Saturday of the month at the Colombo Rowing Club. The Royal Thomian Regatta is the oldest inter-mural rowing regatta in Sri Lanka.

The Royal Thomian Water Polo Encounter is the annual Water Polo fixture between Royal College, Colombo and S. Thomas' College, Mt Lavinia. While Water Polo encounters between the two schools have been held on and off through the annals of the two schools shared histories, the encounter was standardized as part of the two schools sporting calendars in 1991 as the Dr.R.L.Hayman Trophy Water Polo Encounter. The event was initially played in two legs much like the Bradby Shield in home and away pools. However, while it is still a two leg encounter, it is now held at the Sugathadasa Aquatic Complex allowing for much larger participation and making it the best patronized Water Polo encounter in Sri Lanka if not Asia.

College has many clubs and societies which students can join. Many of these clubs and societies organize several projects on an annual basis. The Computer Club, The Interact Club, The Radio Club, The Aeronautical Society, the Stamp Club, the Senior Science Association and the Red Cross Society are just some of clubs and societies at S. Thomas'. All of the above are fully or partially funded by the College. Joining and actively taking part in club activity is strongly recommended. All such clubs and societies are supervised by a Master-in-Charge and have their respective President, Vice-President, Secretary and Treasurer elected from among the students.

The Radio Club in College is regarded as one of the oldest societies, as archives show that the club has been in service since 1926. The club was also one of Sri Lanka 's first organisations to acquire the HAM radio license, that being 4S7TC.

The following bursaries and scholarships are available;

Past students of S. Thomas' are referred to as Old Thomians. STC educated the first Prime Minister of Sri Lanka.[29]