Beira Lake is a lake in the center of the city of Colombo, Sri Lanka. The lake is surrounded by many large businesses in the city. It occupied approximately 165 hectares of land 100 years ago and has been reduced to mere 65 hectares today due to various reasons. During the colonial era of the Portuguese, and the English the lake was used to transport goods within the city. It still retains its Portuguese name. The lake was originally built before the colonization of the country and connected to many intricate canals providing easy way of transporting goods within the city and suburban cities.

The lake has two distinct bodies of water, the smaller lake bordering Navam Mawatha and the larger lake bordering D.R. Wijewardena Mawatha (formerly McCullum Road) the two bodies are connected by narrow canal which runs through Slave Island and the Sri Lanka Army Headquarters. The lake spills to the Indian Ocean at Galle Face. 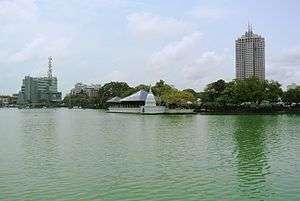 The lake in the day

Lined with many large warehouses, reminiscent of its past when tea used to be transported to the port of Colombo on barges via the port access canal, the lake now is very quiet with many of the warehouses been abandoned. With maximum length of 1 mile, the lake has been home to Colombo Rowing Club for over 140 years.

The Sri Lanka Exhibition and Convention Centre is located on the waterfront, further the People's Bank and the Inland Revenue Department headquarters are located in close to the lake. The Associated Newspapers of Ceylon Limited is housed in the nearby "Lake House" building.

The lake with many government owned properties has been earmarked for development including a casino district on its McCullum road water front.

The lake is home to species of storks, pelicans, monitor lizards and various species of fish.

The lake gets its famous green color and usually bad odor due to the result of pollution over hundreds of years and algae that is present in the water. The bad smell is mostly prominent during dry weather, due to the high rates evaporation and it fades off with the arrival of The Rainy season

The Urban Development Authority of Sri Lanka has started the Beira Lake Restoration Project to turn the area into a tourist attraction. The Water in the Beira Lake will be cleaned and, Waste Water Outlets will be removed and Water Quality will be monitored. Linear parks will be built around the lake alongside several Urban parks which will be built in several places surrounding the Beira lake, a water bus terminal is also planned.[1]