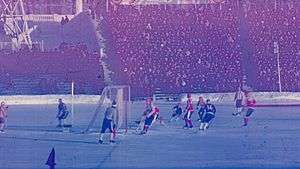 SKA Khabarovsk in a home game against Yenisey in 1982

SKA-Neftyanik (Russian: СКА-Нефтяник) is a professional bandy club from Khabarovsk, Russia, established in 1947. It plays in the Russian Bandy Super League, the top division of Russian bandy.[1] The club colours are yellow, red and black.[2]

The team was founded in 1947 and was known under the abbreviations ODO (Okruzhnoy Dom Ofitserov), SKVO (Sportivnyi Klub Voennogo Okruga) and eventually SKA (Sportivnyi Klub Armii). In 1999 it merged with Neftyanik Khabarovsk to become SKA-Neftyanik. SKA played in the elite division of Soviet bandy since 1954.

The name of the club SKA stands for "Sports Club of the Army", while Neftyanik means "oiler" as the team was sponsored by the Khabarovsk Oil Refinery.

Since the 2013-14 season the team plays at the brand new indoor arena, Arena Yerofey.[3]

This article is issued from Wikipedia - version of the 9/17/2015. The text is available under the Creative Commons Attribution/Share Alike but additional terms may apply for the media files.