Saarlouis (German pronunciation: [zaːɐ̯ˈlʊɪ]; French: Sarrelouis, French pronunciation: ​[saʁlwi]) is a city in the Saarland, Germany, capital of the district of Saarlouis. In 2006, the town had a population of 38,327. Saarlouis, as the name implies, is located at the River Saar. It was built as a fortress in 1680 and named after Louis XIV of France. 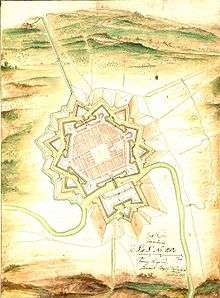 The Fortress of Saarlouis in 1693.

With the Treaties of Peace of Nijmegen in 1678/79, the Lorraine fell to France. In 1680, Louis XIV of France gave order to build a fortification (to defend the new French Eastern frontier) on the banks of the river Saar which was called Sarre-Louis. France's famous military engineer, Sébastien Le Prestre de Vauban, constructed the city, the plans were made by Thomas de Choisy, the city's first Gouvenour. In 1683, Louis XIV visited the fortress and granted arms. The coat of arms shows the rising sun and three Fleur-de-lis. The heraldic motto is Dissipat Atque Fovet: He (the Sun) dispels (the clouds) and heats (the earth).

In 1697, with the Treaty of Ryswick, most parts of Lorraine gained independence again, but Saarlouis and the surrounding areas remained a French exclave. During the French Revolution, the town was renamed Sarre-Libre, but it returned to its original name in 1810. With the Treaty of Paris in 1815, Saarlouis (and the whole region later known as the Saargebiet) became Prussian.

Marshal Michel Ney, who was born in Saarlouis, was arrested and tried for treason after the failure of Napoleon I's Waterloo Campaign. Ney's attorney tried to use the Prussian annexation to save his client's life, arguing that Ney was no longer a French citizen and therefore exempt from the court's jurisdiction. Ney refused to cooperate, declaring himself to be French, and so was convicted and later executed.

After World War I, French troops occupied Saarlouis. The Saargebiet became a protectorate of the League of Nations for a period of 15 years. In 1933, a considerable number of anti-Nazi Germans fled to the Saar, as it was the only part of Germany left outside the Third Reich's control. As a result, anti-Nazi groups campaigned heavily for the Saarland to remain under control of League of Nations as long as Adolf Hitler ruled Germany. However, long-held sentiments against France remained entrenched, with very few sympathizing openly with France. When the 15-year-term was over, a plebiscite was held in the territory on 13 January 1935: 90.3% of those voting wished to rejoin Germany.

From 1936 till 1945, Saarlouis was named as Saarlautern (-lautern being a common ending of town and village names in Germany) in an attempt by the Nazis to Germanise the town name.

After World War II, the region (then called the Saarland), was again occupied by France. In a plebiscite in 1955, most of the people in the Saarland opted for the reunification with the Federal Republic of Germany, and on 1 January 1957, it became the 10th federal state of West Germany.

In 1980, Saarlouis celebrated its 300th anniversary.

Even today, the fortress dominates the city's hexagonal floor plan. Beside the buildings made by Vauban, there are also some constructions left from the 19th century when the Prussians got control over the town. After 1887, some parts of the fortress were slighted, but many buildings and places, e.g. the casemates, some barracks and the Great Market with the Commander's Office and the Vauban island, a former ravelin with a memorial for Michel Ney can still be seen today.

Saarlouis was famous for its nearby steel and iron ore production and its nearby mining facilities. Today, the Ford Motor Company is the city's largest employer, producing the Ford Focus and Ford Kuga. The plant in the Roederberg suburb is one of Ford's most efficient facilities worldwide.

The industrial port in Saarlouis-Roden is Germany's 8th largest inland port. Saarlouis is also a manufacturer of chocolate.[2] It is connected to Saarbrücken by the A 620 and with Luxembourg by the A 8. 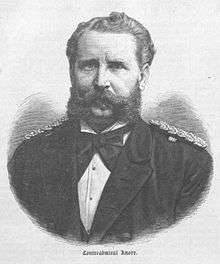