The collector of the Sahih Muslim, Muslim ibn al-Hajjaj, was born into a Persian family in 204 AH (817/18 CE) in Nishapur (in modern-day Iran) and died in 261 AH (874/75 CE) in the city of his birth. He traveled widely to gather his collection of ahadith (plural of hadith), including to areas now in Iraq, the Arabian Peninsula, Syria and Egypt.

Out of 300,000 hadith which he evaluated, approximately 4,000 were extracted for inclusion into his collection based on stringent acceptance criteria. Each report in his collection was checked and the veracity of the chain of reporters was painstakingly established. Sunni Muslims consider it the second most authentic hadith collection, after Sahih al-Bukhari. Sahih Muslim is divided into 43 books, containing a total of 7190 narrations. However, it is important to realize that Muslim ibn al-Hajjaj never claimed to collect all authentic traditions as his goal was to collect only traditions that all Muslims should agree on about accuracy.

According to Munthiri, there are a total of 2,200 hadiths (without repetition) in Sahih Muslim. According to Muhammad Amin,[4] there are 1,400 authentic hadiths that are reported in other books, mainly the six major hadith collections.

Many Muslims regard this collection as the second most authentic of the six major hadith collections,[5] containing only sahih hadith, an honor it shares only with Sahih al-Bukhari, both being referred to as the Two Sahihs. Shia Muslims (and some Sunnis) dismiss some of its contents as fabrications or untrustworthy due to the questionable reliability of some narrators.

Despite the book's high stature, and the consensus of scholars on that it is the second most valid categorized book of Hadith, after Sahih al-Bukhari, it is agreed upon that this does not mean that every element in it is true, in comparison to other Hadith books, but means that the book as a whole is valid. Such as the preference of Sahih al-Bukhari to Sahih Muslim, which does not mean that every Hadith in Sahih al-Bukhari is more valid than every Hadith in Sahih Muslim, but that the total of what is contained Sahih al-Bukhari is more valid than the total of what is contained in Sahih Muslim, and likewise, the validity of a certain Hadith form the two books of Hadith, over Hadith from other Sahih books, can not be inferred except after the correctness of that particular Hadith is shown.[6] 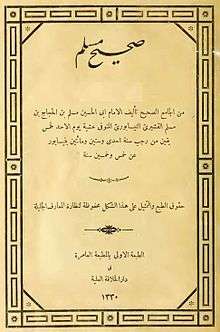 Translations of commentaries of Sahih Muslims are available in numerous languages including English, Urdu, Bangla, Tamil, and Bosnian.[8]