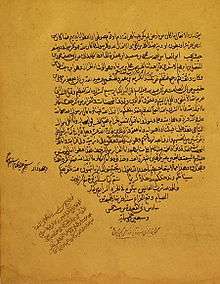 Tahdhib al-Ahkam is translated by Ludwig W. Adamec as confirmation of decision[3] and by I.K.A Howard as The Refinement of the Laws (as Discussed).[4]

Al-Istibsar is one of the four major Shia collections of Hadith (Persian: الكتب الاربعة‎‎) authored by Shaykh Tusi.[6] According to Ali Nasiri, when Shaykh Tusi transferred to Baghdad and participated in the class session of Shaykh al-Mufid, he found conflicting Hadith (traditions) in Shia sources. Due to his nomination at introduction of Tahdhib al-Ahkam,[4] he wrote the book as commentary on the Al-Muqni'yah for solving the crisis of contradiction in the Islamic seminary in response to his friend request. Ali Nasiri give three reason for selection Al-Muqni'yah by Shaykh Tusi: dignity of Al-Shaykh Al-Mufid, Al-Muqni'yah was based on Shia view and last reason is fruition of Al-Shaykh Al-Mufid’s intellectual and mental protection.[7]

Shaykh Tusi explained his style in authoring the Tahdhib al-Ahkam in the introduction of it. According to view point of Ali Nasiri, Shaykh Tusi authored this book basis on the six phases:[7]

Therefore, Shaykh Tusi proceeded to his work in three step:[7]

According to Najaf publication, Tahdhib al-Ahkam included 409 chapters, 13988 traditions and according to counting of Muhaddis Noori it included 393 chapters, 13590 traditions. This variance between reports had led by mistake in counting.[8]