In this Japanese name, the family name is Sakai.

For the other daimyo with this name see Sakai Tadakatsu (Shōnai)

The Sakai were identified as one of the fudai or insider daimyō clans which were hereditary vassals or allies of the Tokugawa clan,[4] in contrast with the tozama or outsider clans. 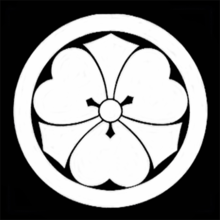 Emblem (mon) of the Sakai clan

Tadakatsu was part of a cadet branch of the Sakai which had been created in 1590.[5]

The fudai Sakai clan originated in 14th century Mikawa Province.[5] The Sakai claim descent from Minamoto Arichika. Arichika had two sons: one of them, Yasuchika, took the name Matsudaira; and the other son, Chikauji, took the name Sakai—and this samurai ancestor is the progenitor of this clan's name.[3]

Sakai Hirochika, who was the son of Chikauji, had two sons, and their descendants gave rise to the two main branches of the Sakai clan. Hirochika's younger son, Sakai Masachika, served several Tokugawa clan leaders -- Nobutada, Kiyoyasu and Hirotada; and in 1561, Masachika was made master of Nishio Castle in Mikawa.[3]

Sakai Sigetada, who was the son of Masachika, received the fief of Kawagoe Domain in Musashi Province in 1590; and then in 1601, Sigetada was transferred to Umayabashi Domain in Kōzuke Province.[6]

Tadakatsu, who was Sigetada's son, was transferred in 1634 to Obama Domain in Wakasa Province where his descendants resided until the Meiji period.[6] In a gesture demonstrating special favor to the Sakai, the second shogun, Hidetada, allowed the use of his personal Tada- in the name Tadakatsu.[7]

The head of this clan line was ennobled as a "Count" in the Meiji period.[6]

The great office of Tairō was the highest ranking of advisor in the Edo period, and Tadakatsu was amongst the first to be appointed to this position of honor, trust and power.[8] Tadakatsu was a rōjū during the years from 1631 through 1638.[1]

The "Nambu incident" alarmed Shogun Iemitsu, but the government's protracted responses were mitigated by the three men who were the shogun's most senior counselors (the rōjū): Sakai Tadakatsu, Matsudaira Nobutsuna, and Inoue Masashige. In effect, this comes to define who amongst Iemitsu's top advisers were principally responsible for Japan's foreign policy during the reign of the third shogun.[14] The fluid subtlety of the rōjō is illustrated in the thought-provoking debates of modern scholarship, e.g.,

Hesselink departs from his narrative of the Nambu incident to contribute to the significant debate about the nature of Japan's "seclusion" (sakoku) during the Tokugawa period. Recent scholarship, particularly that of Ronald Toby, has held that the intent behind the seclusion edicts of the 1630s was not to isolate Japan from all foreign contact, but to proactively use foreign relations as a means of establishing the bakufu's domestic legitimacy. Hesselink contests this characterization, arguing instead that Japan was genuinely isolated, and that the bakufu's foreign policy was less systematic and far-reaching than scholars have recently claimed. In one important respect, however, Hesselink's research reaffirms the claims of this recent scholarship. By showing how the Shogunal government went to such great lengths to use the Nambu incident to pressure the Dutch into sending an embassy to Edo, he illustrates how important it was to the bakufu to use diplomatic relations as a means of securing domestic legitimacy. What was for the Dutch merely a cynical gesture aimed at preserving their trade relations with East Asia was for the bakufu a real opportunity to parade twenty-two Dutchmen in red and white striped uniforms through the streets of Edo, thus impressing upon a domestic audience the fiction that the bakufu's authority was recognized throughout the world.[15]