For other uses, see Musashi (disambiguation). 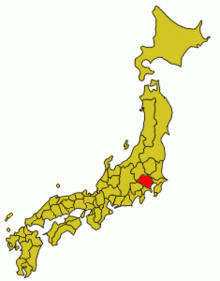 Musashi Province (武蔵の国, Musashi no kuni) was a province of Japan, which today comprises Tokyo Metropolis, most of Saitama Prefecture and part of Kanagawa Prefecture.[1] It was sometimes called Bushū (武州). The province encompassed Kawasaki and Yokohama. Musashi bordered on Kai, Kōzuke, Sagami, Shimōsa, and Shimotsuke Provinces.

Musashi was the largest province in the Kantō region.

The name Musashi, recorded in early records as 牟射志 muzasi, has been conjectured to be of Ainu origin.[2] It has no apparent meaning in Japanese, but mun-sar-i or mun-sar-ihi (weed-marsh-POSS)[3] is a hypothetical Ainu form that would mean "marsh/wetland of (i.e. belonging to) weeds/inedible or otherwise useless plants," and Musashi sits in the middle of the Kanto plain.[4]

Musashi had its ancient capital in modern Fuchu, Tokyo and its provincial temple in what is now Kokubunji, Tokyo. By the Sengoku period, the main city was Edo, which became the dominant city of eastern Japan. Edo Castle was the headquarters of Tokugawa Ieyasu[5] before the Battle of Sekigahara and became the dominant city of Japan during the Edo period, being renamed Tokyo during the Meiji Restoration.

Hikawa jinja was designated as the chief Shinto shrine (ichinomiya) of the province; [6] and there are many branch shrines.[7]

The former province gave its name to the battleship of the Second World War Musashi.

Timeline of important events in Musashi 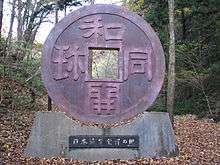 Musashi Province had 21 districts, added one after.