This article is about the American musician. For other people of the name, see Samuel Hunt (disambiguation).

Sam Lowry Hunt (born December 8, 1984) is an American singer, songwriter, and former college football player. Born in Cedartown, Georgia, Hunt played football in his high school and college years and once attempted to pursue a professional sports career before signing with MCA Nashville in 2014.

Prior to his successful solo career, Hunt was credited for writing singles for Kenny Chesney, Keith Urban, Billy Currington, and Reba McEntire. His debut studio album, Montevallo, broke several chart records with five singles spawned from the record, including three consecutive Hot Country Songs chart and four Country Airplay chart number ones. The lead single from the album, "Leave the Night On", peaked atop concurrently on the Hot Country Songs and Country Airplay charts, bringing Hunt to be the first country music artist in 22 years, after Billy Ray Cyrus, to reach the top of three country music charts simultaneously since the Nielsen SoundScan-era began.[5] He is also the first country music artist since Clint Black to occupy both year-end number one album and single with Montevallo and "Take Your Time".[6][7][8] The fifth single, "Make You Miss Me", from Montevallo hit number one on the Country Airplay chart, thus making Hunt the first solo male artist to land four number ones on the Country Airplay chart from a debut studio album.[9][8]

Upon the launch of his career, Hunt has quickly assumed recognition from both inside and outside the country music community for his boundary-breaking artistry, incorporating use of R&B and pop into the production and songwriting of his songs. He has been honored with numerous awards, including one American Music Award, and one CMT Music Award, as well as nominations for Billboard Music Awards and Grammy Awards.

Hunt was born on December 8, 1984 in Cedartown, Georgia, United States, the eldest of three children born to Allen and Joan Hunt, an insurance agent and a teacher respectively.[2][10] He studied at Cedartown High School where he played football. He was named 2002 Co-Offensive Player of the Year, was selected for the Georgia Sportswriters Association All-State Class AAA first-team as an all-purpose player, and was a Wendy's High School Heisman nominee.[11]

He was a quarterback for two years at Middle Tennessee State University and two years at UAB where he majored in philosophy before graduating with a business degree in economics.[12][13] He had limited action in six games with Middle Tennessee; at UAB, he started only seven games during the 2006 season due to injuries.[2][14] After practice every day, he would teach himself how to play acoustic guitar. With respect to the root of his interest in music, Hunt recalled between stops in tour, "I never saw myself as a musician or having any musical talent... I was just killing time that summer, and a buddy had recently bought a guitar. I picked it up one day and on a whim thought, 'You know, I think I want to buy a guitar.'" Hunt's college roommates, having listened to a few songs he wrote, encouraged him to book shows at bars, marking the start of his pursuit of a career in music.[15]

After graduating from UAB in 2007, his football talents were noticed by the NFL and he was invited to training camp with the Kansas City Chiefs.[16] "I knew this was a once-in-a-lifetime opportunity, and I needed to find out if I could take it all the way," Hunt said. In 2008, two months after the unsuccessful attempt to impress the football team, to the surprise of his family and friends, he left to pursue a music career, and moved to Nashville along with a friend with only "some food and two mattresses and [...] his mom's minivan".[17][18]

Hunt co-wrote Kenny Chesney's 2012 hit, "Come Over", for which he received an ASCAP award.[19] He also wrote two singles released in 2014: Keith Urban's "Cop Car" and Billy Currington's "We Are Tonight". Hunt independently released the single, "Raised on It" in September 2013 and in October 2013 he released via his website a free 12-song mixtape, titled Between the Pines.[20] Hunt also co-wrote "Love Somebody", the title track from Reba McEntire's twenty-seventh studio album of the same name.[21] 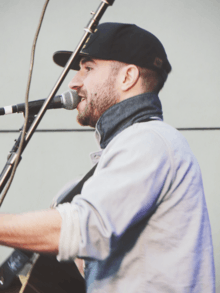 In January 2014, it was confirmed that he had signed a recording contract with MCA Nashville. On August 12, 2014, he released X2C, a four-song EP, intended as a preview of his debut studio album.[22] The EP debuted at number 36 on the Billboard 200 chart and number 5 on the Billboard Top Country Albums chart, selling 8,000 copies in its first week.[23]

Hunt's first single for MCA was "Leave the Night On", which went to number one on the Country Airplay chart in October 2014[24] and has since been certified Plantium by the Recording Industry Association of America (RIAA).[25] The music video for the song earned Hunt two CMT Music Awards nominations, winning him Breakthrough Video of the Year, as well as one Billboard Music Award nomination. His debut studio album, Montevallo, was released on October 27, 2014.[26] On the same day, Sam Hunt released Between the Pines: Acoustic Mixtape. The album is made up of acoustic versions of his hit songs including his versions of ones that he wrote for other artists. Universal Music Group Nashville president Cindy Mabe explained the date of the release: "The idea was to release it on the same date that Montevallo was released [in 2014] as a one-year anniversary gift to fans and Sam's way to offer more music and a thanks for the support."[27] On November 5, 2014, Montevallo debuted at number one on the Top Country Albums chart and number 3 on the Billboard 200 chart.[28] It opened with 70,000 units sold. The album included his own version of "Cop Car". The second single from the album, "Take Your Time", peaked at number 20 on the Billboard Hot 100 chart. The track spent 11 weeks at number one of Hunt's 17 in 2015 on the Billboard Hot Country Songs chart, making him the sixteenth artist in the chart's 57-year history – and the fifth in the past 50 years – to rule for 10 weeks or more.[29] With Montevallo and "Take Your Time", Hunt became the first country music artist since Clint Black to have his debut studio album and single to peak atop the year-end charts in the same year.[7][8] Five days after the release of Montevallo, Hunt announced his first tour, Lipstick Graffiti. Tickets went on sale on November 14, 2014. Within a short time of going on sale, the tour sold out at 15 of the venues.[30] In 2015, he served as an opening act (alongside Hunter Hayes) for Lady Antebellum's Wheels Up Tour.

Hunt was featured on Billboard for the issue of August 29, 2015, where he opened about breaking down country music stereotypes.[31] He served as a background vocalist on Carrie Underwood's song, "Heartbeat", which was released in October 2015.[32] To commemorate the one-year anniversary of Hunt's debut studio album, Montevallo, Between the Pines was re-released in October 27, 2015, peaking at number 31 on the Billboard 200 chart.[33] Hunt won his first American Music Award for New Artist of the Year on November 22, 2015 in Los Angeles, California.

Writing for Billboard, Elias Leight observed on Hunt's vocal performance, describing his vocal performance in studio sessions as a "rough, heartthrob voice [that] shines clearly", but noted that his live vocals "[weren't] always easy to hear." Leight furthered by praising Hunt's delivery to be "a mix of speaking and rapid-fire singing that sets him apart from other country singers," but commented its impact was diminished because of his live singing. Finally, Hunt's live performance of "Make You Miss Me" rendered the music writer "the clearest glimpse of his husky mid-range, smooth but rugged voice" in a setting where "there were no beats crowding him or guitars to compete with."[34]

Hunt's music contains elements of country, R&B and pop. Dwight Yoakam, while speaking to Entertainment Tonight, commented on Hunt's music, saying "It reminds me a little bit of, with the infusion of soul and southern R&B, with the things that happened surrounding the album that Ray Charles put out – the very historic album The Modern Sounds of Country Music back in the early '60s[...] It was a reinterpretation that not only intrigued country audiences at the time, but it brought a brand new audience to the country music world."[35] His songwriting was heavily influenced by Brad Paisley, whose early hit, "He Didn't Have to Be" had a big impact on him as a kid growing up in Georgia:[36] "I remember being at church on Wednesday night at Wednesday night supper, and getting the keys from my mom well before it was over to just go sit in the car and to turn the radio on and hopefully wait and catch that song."[36] He also cites Billy Currington, Usher, K-Ci & JoJo, R. Kelly, Ginuwine[37] and Alice Cooper[36] as musical influences.

Hunt told Taste of Country that he does not write his songs with a specific genre in mind, but rather follows his instinct.[37] “I want to sound different than everybody else," said Hunt talking about his musical style. "To use a football phrase, I try to zig when other people zag.”[18] Commenting on his interpretation of country music, he told Rolling Stone Country, "I think country songs are truthful songs about life written by country people, but the beats and sounds will continue to evolve."[38] Billy Dukes of Taste of Country, on observing "Break Up in a Small Town", referred the song as "likely the wordiest song of 2015" and Hunt's "most genre-bending release to country radio", adding "Any talk of which genre Hunt belongs in misses the point. His story hits hard. It’s deep and emotional and sincere and all the things we expect from a great country song."[39]

In a 2015 interview with Billboard, Hunt remarked on the position of women in his music, "Respect for women was a very important part of my upbringing," and added, "The women in my life demanded that from me." Hunt even named his album, Montevallo, after the hometown of a former girlfriend and consulted her in the lyrical production: "I spent a lot of time talking to her about the songs and asking, 'What do you think about this?' Her perspective was a powerful part of me being able to connect with a female audience, not just a male audience."[18]