The 2006 NFL season was the 87th regular season of the National Football League. Regular season play was held from September 7 to December 31, 2006.

The NFL title was eventually won by the Indianapolis Colts, when they defeated the Chicago Bears 29-17 in Super Bowl XLI at Dolphin Stadium at Miami Gardens, Florida on February 4.

This was the first season that the NFL used a "flexible-scheduling" for the last few weeks of the season, allowing the league flexibility in selecting games to air on Sunday night, in order to feature the current hottest, streaking teams. This was implemented to prevent games featuring losing teams from airing during primetime late in the season, while at the same time allowing NBC to rake in more money off of the higher ratings from surprise, playoff-potential teams that more fans would enjoy watching.

Under the flexible-scheduling system, all Sunday games in the affected weeks tentatively had the start times of 1 p.m. ET/10 a.m. PT, except those played in the Pacific or Mountain time zones, which will have a tentative start time of 4 p.m. ET/1 p.m. PT (or 4:15 p.m. ET/1:15 p.m. PT if it is a doubleheader weekend). On the Tuesday 12 days before the games, the league moved one game to the primetime slot, and possibly one or more 1 p.m. slotted games to the 4 p.m. slots. During the last week of the season, the league could re-schedule games as late as six days before the contests so that all of the television networks will be able to broadcast a game that has playoff implications.

This was the first season that NBC held the rights to televise Sunday Night Football, becoming the beneficiaries by negotiating the new flexible-scheduling system.[1] ESPN became the new home of Monday Night Football, replacing sister network American Broadcasting Company, who chose to opt out of broadcasting league games.[1] Meanwhile, CBS and Fox renewed their television contracts to the American Football Conference and the National Football Conference packages, respectively.[2]

Clinched playoff seeds are marked in parentheses and shaded in green. No tie games occurred this year.

Within each conference, the four division winners and the two wild card teams (the top two non-division winners with the best overall regular season records) qualified for the playoffs. The four division winners are seeded 1 through 4 based on their overall won-lost-tied record, and the wild card teams are seeded 5 and 6. The NFL does not use a fixed bracket playoff system, and there are no restrictions regarding teams from the same division matching up in any round. In the first round, dubbed the wild-card playoffs or wild-card weekend, the third-seeded division winner hosts the sixth seed wild card, and the fourth seed hosts the fifth. The 1 and 2 seeds from each conference then receive a bye in the first round. In the second round, the divisional playoffs, the number 1 seed hosts the worst surviving seed from the first round (seed 4, 5 or 6), while the number 2 seed will play the other team (seed 3, 4 or 5). The two surviving teams from each conference's divisional playoff games then meet in the respective AFC and NFC Conference Championship games, hosted by the higher seed. Although the Super Bowl, the fourth and final round of the playoffs, is played at a neutral site, the designated home team is based on an annual rotation by conference. 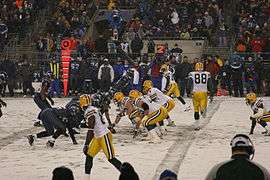 The 2006 season marked the debut of new officiating uniforms which are supposed to be more comfortable for officials to wear in extreme weather over the old polyester uniforms. The uniforms were designed by Reebok using a proprietary material technology to keep officials both warm and dry during the winter months of the season. On the shirt, the position and number are removed from the front pocket and the lettering and numbers on the back side were black-on-white and are smaller print and the sleeve shows the uniform number. Officials also wore full-length black pants with white stripe during the winter months to stay warm, which was criticized by media. This was the first major design overhaul since 1979, when the position name was added to the shirt, but later abbreviated in 1982.

On March 20, 2006, Paul Tagliabue announced his plans to retire as NFL commissioner. During an NFL meeting in Northbrook, Illinois, on August 8, league team owners selected Roger Goodell, the NFL's then-current chief operating officer, as the new commissioner. Tagliabue continued to serve as commissioner until Goodell officially replaced him on Friday September 1.

Tagliabue became NFL commissioner on October 26, 1989. During his tenure, the league has added four new teams; saw four franchises move (including two franchises—the Rams and Raiders—from Los Angeles, the second-largest television market in the U.S.); the construction of seventeen new stadiums; began its own in-house television specialty cable network, the NFL Network; has greatly increased television rights fees with its broadcasters, including the addition of the Fox network and its NFL programming; and has maintained labor peace with the players' union.

Return of "The Duke" football 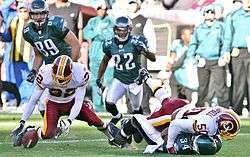 A Philadelphia fumble is recovered by Washington's Ade Jimoh, week 14

For the first time since Super Bowl IV at the conclusion of the 1969 season, the official NFL game ball was known as "The Duke" in honor of Wellington Mara, whose family owns the New York Giants. Son John is the current CEO of the team. The NFL first used "The Duke" ball in honor of Mara in 1941 after then-Chicago Bears owner George Halas and then-Giants owner Tim Mara (Wellington's father) made a deal with Wilson Sporting Goods to become the league's official supplier of game balls, a relationship that continued into its sixty-fifth year in 2006.[4]

"The Duke" ball was discontinued after the 1970 AFL-NFL Merger, and the merged league began using a different standardized ball made by Wilson. The only other time that "The Duke" ball name was used was during the two "Thanksgiving Classic" games in 2004.

One side of the new 2006 "Duke" football featured the NFL shield logo in gold, the words "The Duke", and the NFL commissioner's signature. The obverse side has a small NFL logo above the needle bladder hole, the conference names between the hole, and the words "National Football League" in gold. As per the custom, specially branded balls were used for the first week of the 2006 season (the "Opening Kickoff") as well as for the Thanksgiving Day, conference championships, Super Bowl XLI and Pro Bowl games.

Through week 11 of the season, all NFL games had been sold out, and for the 24th time, all blackout restrictions had been lifted.[5] The streak was ended by the Jacksonville at Buffalo game in Week 12.[6]

The New Orleans Saints returned to their home at the Louisiana Superdome in Week Three. The Saints played home games during the 2005 NFL Season in San Antonio, TX, Baton Rouge, LA, and East Rutherford, NJ, due to the damage to the Superdome caused by Hurricane Katrina. The Saints finished the 2006 regular season 10–6, clinched a 1st Round Bye, and beat the Philadelphia Eagles in the Divisional Round of the playoffs. The Chicago Bears defeated the Saints in the NFC Championship, 39–14.

Starting September 18, fans were able to download highlights of their teams' games through Apple's iTunes Store. Each video costs US$1.99 each but fans have the chance of buying a "Follow Your Team season ticket" which brings every game of that team to the fan for $24.99.[7]

Also available will be NFL GameDay, the NFL Network's comprehensive Sunday night review which features post-game reactions and game analysis, all for $1.99 a show or $19.99 for the full season.

Lamar Hunt died in Dallas, Texas on December 13 from complications from prostate cancer at the age of 74. He is credited with challenging the NFL with the formation of the American Football League, which led to the subsequent merger of the two leagues.

At 3 a.m. on January 1, 2007, Denver Broncos cornerback Darrent Williams was shot and killed in Denver, within hours after the last regular season game against the San Francisco 49ers. Less than two months after, on February 24, 2007, Broncos running back Damien Nash collapsed and died after a charity basketball game at a high school. Both players died at the age of 24.

The following teams and players set all-time NFL records during the regular season: 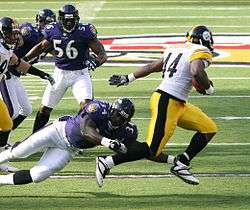