Samuel Milton "Golden Rule" Jones (1846 - 1904) was a Progressive Era Mayor of Toledo, Ohio from 1897 to until the time of his death in 1904. Jones was famous for his outspoken advocacy of the proverbial Ethic of reciprocity or "Golden Rule," hence his nickname. Jones was an influential advocate of municipal reform and oversaw implementation of a series of humane modifications of the city of Toledo's administration during his tenure as mayor.

Samuel Milton Jones was born on August 3, 1846, at Tŷ-mawr near Beddgelert in Caernarvonshire, Wales.[1] The Jones family was impoverished when Samuel was 3 years old, they emigrated to the United States in search of economic opportunity, winding up in central New York state.[2]

Owing to the family's poverty, Jones was forced to work from a very young age and he received little formal education.[2] After working for a time on his family's small farm, he left at age 14 to take work in a sawmill.[3] From age 16 he began working summers aboard a steamship.[3]

When he was 18, Jones made his way to Titusville, Pennsylvania to try to find work in the booming oil industry of Western Pennsylvania.[2] He was initially unsuccessful there and he returned to New York the next year, where he found employment and managed to save up a modest sum of money over the next three years.[3]

Jones returned to Pennsylvania at the age of 22, where he began to speculatively invest his small nest egg in oil leases, from which he began to accumulate wealth.[3] Jones married and sired three children and spent the next 15 years in the Pennsylvania oil industry.[2]

Following the death of his wife, Jones and his two surviving children left Pennsylvania for the oil fields of Ohio in 1886.[2] It was there that he helped established the Ohio Oil Company, a firm which was later bought by Standard Oil Company, making Jones a wealthy man.

In 1892, Jones moved to Toledo, Ohio, the first time that he had lived in a large city.[3] The next year, the Panic of 1893 erupted, with the United States into a depression and millions of individuals thrown into the grips of poverty.[3] As a man of considerable wealth Jones was not himself personally affected by the misery around him — with an estimated 7,000 people in Lucas County, Ohio rendered indigent and the city of Toledo forced millions of dollars in debt — but he nevertheless seems to have been emotionally affected by the economic collapse.[3]

Jones turned his talents to mechanical invention, obtaining a patent in 1894 for a new variety of iron pumping rod for deep well drilling.[3] He opened a manufacturing plant in Toledo that same year for the manufacture of these so-called "sucker rods" for the oil industry — the Acme Sucker Rod Company.[3] This marked a new career turn for Jones, from that of a mineral rights speculator and oil drilling operator to that of an employer of wage labor in a factory setting.

Jones made the decision to operate his new enterprise in accord with some of the emerging ideas about workplace reform. Whereas the prevailing wage in the depressed local economy stood at $1.00 to $1.50 a day, Jones paid his employees a living wage of $1.50 to $2.00 a day.[3] Jones implemented the 8-hour day for his workers and offered them paid vacation, revenue-sharing, and subsidized meals in a company cafeteria.[3] Jones also contributed to workplace culture by paying for instruments for employees so that they could form a company band.[4] Instead of a lengthy list of company regulations governing employee behavior, Acme Sucker Rod posted only one rule on the company notice board: "The golden rule: Do unto others as you would do unto yourself."[3]

Jones's largesse in the face of general misery grew to legendary proportions among residents of Toledo and he earned the popular moniker "Golden Rule" Jones. 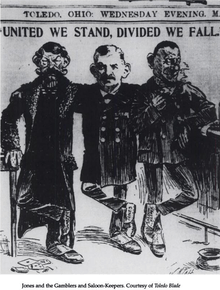 "Jones and the Gamblers and Saloon-Keepers." Contemporary cartoon from the Toledo Blade.

In 1897 Jones received the Republican nomination for mayor of Toledo. Workers liked his golden rule policy and united behind him, and he won the mayoral election. He strove to improve conditions for the working class of his community. Again based on his belief in the Golden Rule, Jones:

These policies made Jones unpopular with the Toledo's business community and his tolerance of saloons caused him to lose the support of many moral reformers. When his term was over in 1899, Jones was not renominated by the Republicans. He ran as an independent instead under the slogan "Principle Before Party" winning a second term with 70 percent of the vote. He was re-elected in 1901 with 57% of the vote and again in 1903 with 48% of the vote in a three-way race.

Jones was a Christian Socialist. He was influenced by Henry George, but argued that "land is not the only property which is in its very nature social and not individual. ... Is not machinery a social product, the result of centuries of experiment and invention? In short, is not our whole civilization essentially a social product? Back of every inventor stands a thousand others who made his invention possible. Back of every enterprising capitalist stands the entire nation, without which not one of his schemes could succeed. ... No man can point to his pile of gold and say 'Alone I earned it.' What is called Socialism is not a visionary plan for remodeling society; it is a present fact, which is not yet recognized in the distribution of wealth."[5]