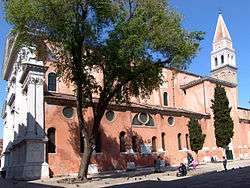 San Francesco della Vigna is a Roman Catholic church in the Sestiere of Castello in Venice, northern Italy.

Along with Santa Maria Gloriosa dei Frari, this is one of two Franciscan churches in Venice. The site, originally a vineyard (Vigna), was donated by Marco Ziani in 1253 for construction of the monastery. A tiny chapel already on the site recalled the spot where an angel supposedly had pronounced Pax tibi Evangelista meus to the shipwrecked apostle St. Mark, patron of Venice. 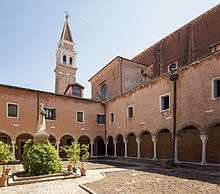 The first church at the site was a triple-nave Gothic church by Marino da Pisa. A monastery housed the Frati Minori dell'Osservanza, while the Conventuali occupied the Frari across town. By the 16th century, the church building was in need of repair. Two main impulses led to the reconstruction of this church; one was the reform sweeping the order of the Franciscan Observants, and the other was the wishes of Doge Andrea Gritti, whose family palace neighbored the church. In 1534, this Doge laid the foundation stone for the new church. The nave was roofed over by 1554. 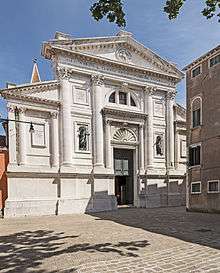 The church was designed in sober Renaissance style by Jacopo Sansovino in 1554, with the advice of the Franciscan friar, Fra Francesco Zorzi. Fra Zorzi based the sizing of the various elements on the number three, because of its association with the Trinity: the nave should be nine paces wide and 27 paces long, each side chapel three paces wide. However the white marble façade (1564-1570) was not based on Sansovino's designs, but instead was a product of a Andrea Palladio. It is thought that the patrician Daniele Barbaro lobbied for the commission to be switched from Sansovino to Palladio in 1562, convincing the then Patriarch, Giovanni Grimani.

Palladio addressed the challenge of linking the central nave with the side aisles in the façade in an innovative manner. The Corinthian columns in both the center and the sides are perched on the same high plinth, though the central four columns are taller and wider than the lateral ones. The lateral columns support half-pediments that mimic the angle of the central full pediment. Above the central portal is a hemicircular window, interrupted superiorly by a bracket and subdivided into three parts. The façade contains two large bronze statues of Moses and Saint Paul (1592), actively stepping forward from their shallow niches, sculpted by Tiziano Aspetti.

At the top of the tympanum, an eagle unfolds a banner stating Renovabitur. Below, a freize dedication of the church states: Deo utriusque templi aedificatori ac reparatori (God, builder and restorer of both temples) is engraved. Four marble plaques state: Ac cede ad hoc / ne deseras spirituale / non sine iugi exteriori / interiorique bello (Enter here / not abandoning the spirit / not without detaching yourself from the exterior world / and making your interior beautiful).[1]

Inside the church, each chapel was sold for 200-350 ducats to aristocratic donors, raising much needed construction funds, granting the rights to place their coat-of-arms in the chapel and to bury their family there. For the right to be buried in the floor of the chancel in front of the high altar, Doge Andrea Gritti paid 1000 ducats. In 1542, Vettor Grimani and his brother Cardinal Marino acquired rights to build the facade for the church. The three sarcophagi for two cardinals and a patriarch from the Grimani family are no longer in place. The facade of the church was ultimately commissioned from Andrea Palladio (1562) by Giovanni Grimani.

In the 1950s were cast the 5 bells in B rung with the Veronese bellringing art. 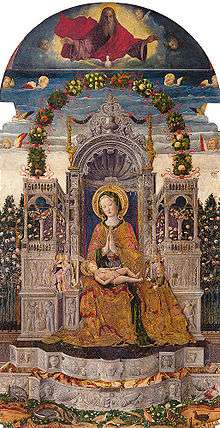 The interior of the church has a simplicity and severity befitting a Franciscan church, with plain Istrian stone Doric pilasters. The choir, which in the past was occupied by the monks during services, is behind the altar. The interior contains an alabaster sculpture of St. Louis of Toulouse and an early 15th-century Gothic painting of the Madonna of humility.

The Grimani chapel (first in the left aisle) is decorated with ceiling paintings by Battista Franco, and murals and altarpiece by Federico Zuccari. The chapel has been restored by the British charity Venice in Peril, which also restored Palladio's facade in the 1990s.[2]

The chapels of the church house masterpieces that both were made for this church or were moved here mainly in the 19th century from shuttering churches, oratories, and monasteries. They belong to some of the most prominent aristocratic families in Venice. Among the chapels, and works therein, are the following (starting from the entrance):[3][4] 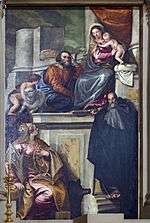