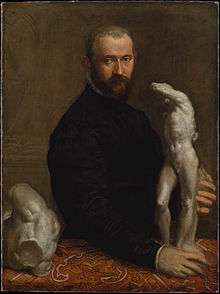 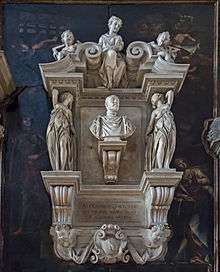 Alessandro Vittoria (1525–1608) was an Italian Mannerist sculptor of the Venetian school, "one of the main representatives of the Venetian classical style"[1] and rivalling Giambologna as the foremost sculptors of the late 16th century in Italy.[2]

Vittoria was born in the Italian city of Trent and was the son of a tailor. Vittoria was trained in the atelier of the architect-sculptor Jacopo Sansovino; he was a contemporary of Titian whose influence can be detected in his compositions. He was a virtuoso in terracotta, often presented with gilded surfaces, marble and bronze. Like all Italian sculptors of his generation, Vittoria was influenced also by Michelangelo and by the Florentine Mannerist, Bartolomeo Ammanati. The closeness of his associations in projects by architects Sansovino, Sanmicheli and Palladio, working with painters Titian, Tintoretto and Veronese[3] placed him squarely among the protagonists of the Cinquecento art world in late 16th-century Venice. 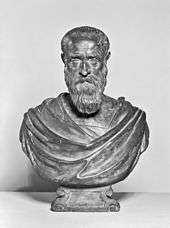 Vittoria was first trained in his native city, Trento, then moved to Venice, where his long artistic relationship with Sansovino was a stormy one. After one quarrel with Sansovino, he removed from Venice and worked in Vicenza, where he collaborated with Veronese on the decorations of the Villa Barbaro at Maser (1560–62) before returning. The two masters worked jointly on great sculptural commissions until Sansovino's death. Vittoria took up his studio and completed Sansovino's unfinished commissions. His pupils included Camillo Mariani and Andrea di Alessandro.

He died at Venice in 1608. His tomb, with his self-portrait bust, is in the church of San Zaccaria.

Vittoria is known for his classicising portrait busts, a genre that scarcely existed in Venice before him,[4] and for medals as well as for his full-length figures, some of which surmount Sansovino's Biblioteca Marciana.

His diary is an important source for the details of his career, as is his will, of 29 July 1576.[5] An exhibition at Trento, 1999 is memorialised in a catalogue by Andrea Bacchi, Lia Camerlengo and Manfred Leithe-Jasper, "La Bellissima Maniera": Alessandro Vittoria e la Scultura Veneta del Cinquecento (Trento 1999) which is the basic text for its introductory essays on Vittoria's art and career, by Manfred Leithe-Jasper; his patrons, by Thomas Martin; his connections with Venetian painting, by Stefano Tumidei; and Vittoria's role as a collector, by Victoria Avery.