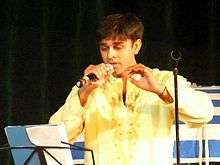 Sanjeev Chimmalgi (Kannada: ಸಂಜೀವ್ ಚಿಮ್ಮಲಗಿ) (born 29 July 1972) is an Indian Hindustani vocalist. He is a disciple of C. R. Vyas. His music reflects the voice culture of Kirana gharana as well as the bandish oriented singing of the Gwalior gharana/ Agra gharana.[1]

Chimmalgi was born in Mumbai to M.V. Chimmalgi, in a family hailing from Dharwad, Karnataka. His grandfather, Chimmalgi Master, was a noted tabla player.

Chimmalgi is professionally trained as a computer engineer. He had his initial training from Madhava Gudi. Later he came under the tutelage of C. R. Vyas. He is also receiving training in Carnatic music under T. R. Balamani and Balachandran in Mumbai and in Konnakol under renowned Mridangam player T S Nandakumar.

He has performed at several venues in Mumbai, Pune, Indore, Kolkata, Miraj, and Nagpur.