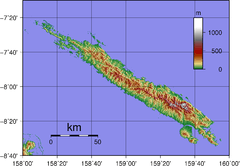 Santa Isabel Island (also known as Isabel and Ysabel) is the longest in the Solomon Islands, the third largest in terms of surface area, and the largest in the group of islands in Isabel Province.

The highest point in Santa Isabel is Mount Sasari, 1220 meters (3675 ft). River Marutho runs down that mountain into the ocean at Hofi. Almost all the rivers or streams run down that center point except for those at the other tip of the Island, Katova side.

The administrative centre is Buala. The nearest airport is Fera Airport on neighbouring Fera Island.

The first European contact to the Solomon Islands was made at Santa Isabel Island, by the Spanish explorer Álvaro de Mendaña on 7 February 1568. It was charted as Santa Isabel de la Estrella (St. Elizabeth of the Star of Bethlehem in Spanish). A settlement was established by the Spaniards, and a small boat (known in the accounts as "the brigantine") was built to survey and chart the surrounding sea and islands. These local explorations led by Maestre de Campo Pedro Ortega Valencia and Alférez Hernando Enríquez resulted in the discoveries of the islands of Malaita, Guadalcanal, Savo, Vangunu, Choiseul, Makira, Ulawa, Malaupaina, Malaulalo, Ali'ite, and Ugi Island.[2][3] The Spanish immediately came into contact with Solomon Islanders and at first the relationship was cordial. However, the Spanish expedition's need for fresh food and water quickly led to tension and conflict, the Solomon Islanders’ subsistence economy being unable to provide continuous supplies to the Spanish.[4]

Having found no gold and little food, and beset by attacks and sickness, the Spanish colonists shifted their colony to the site of today's Honiara on Guadalcanal, and the settlement on Santa Isabel was abandoned.

Santa Isabel islanders suffered attacks from blackbirding in the nineteenth century (the often brutal recruitment or kidnapping of labourers for the sugar plantations in Queensland and Fiji).

In April 1885 a German Protectorate was declared over the North Solomon Islands, including Santa Isabel Island. In 1900, under the terms of Treaty of Berlin (14 November 1899), Germany transferred the North Solomon Islands (except for Bougainville and its surrounding islands) to the British Solomon Islands Protectorate in exchange for the British giving up all claims to Samoa. Missionaries settled on Santa Isabel Island under both protectorates, converting most of the population to Christianity. In the early 20th century several British and Australian firms began large-scale coconut planting. 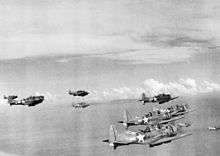 U.S. Navy Douglas SBD-3 Dauntless dive bombers of scouting squadron VS-6 en route to attack the Japanese seaplane base at Rekata Bay, Santa Isabel Island, August–September 1942. VS-6 operated from the aircraft carrier USS Enterprise (CV-6) in the Solomons until she had to return to Pearl Harbor, Hawaii (USA), after the Battle of the Eastern Solomons on 24–25 August 1942. VS-6 (and VB-6 crews) under CO Turner Cladwell then operated for another month from Henderson Field, Guadalcanal, known as "Flight 300" (from the Enterprise flight schedule on 24 August).

During World War II, the Imperial Japanese Navy established a seaplane base at Rekata Bay on the northeast coast. The base was bombed by American forces from August 1942 to August 1943. In the following month, the Japanese evacuated the base.

With the independence of the Solomon Islands in July 1978, Santa Isabel Island has been administered as part of Isabel Province.

The population of Santa Isabel speak as many as eight languages in addition to English and Solomon Islands Pijin.