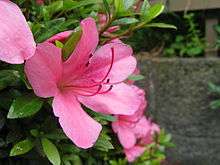 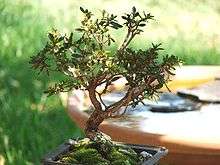 Satsuki azalea is a cultivar group of the species Rhododendron indicum, a type of azalea extensively cultivated by the Japanese. It is native to the mountains of Japan.

Satsuki azaleas have a diverse range of flower forms and color patterns with multiple patterns often appearing on a single plant. Satsuki bloom from May to June; the name “Satsuki” in Japanese is reference to their blooming period, the fifth month of the Asian lunar calendar. They are commonly used as a subject in bonsai and many bonsai enthusiasts and shows are dedicated solely to them. There are thousands of different varieties, but some popular ones are chinzan, kaho, gyoten, osakasuki, eikan, nikko, hakurei, hakurin, kinsai, and many more.

Satsuki azaleas are popular bonsai plants for many reasons. It can take a hard pruning, the flowers are amazing, and they can be developed fast. Since azaleas prefer to be slightly acidic, a popular soil to grow them in is kanuma.

Repotting is a big stress to any tree, and bare rooting is the biggest stress to a tree. When repotting Satsuki azaleas, it is better to do it in early to mid spring. Some people say that you should repot after flowering, but this is not the case. Probably, this is mistaken as happening in the same year. Flowering is the second biggest stress to a Satsuki. So repotting and flowering in the same year is not a healthy thing to do for a tree. That is why when repotting, do not let the Satsuki flower that year. Instead, use a three-year cycle, allowing repotting in year 1, restyling in year 2 and flowering in year 3. Kanuma is a recommended soil for Satsuki azaleas. Also, it is popular to put yamagoki moss on top of the soil to keep them moist. This will benefit the many feeder roots of the tree.