Schism of the Three Chapters

The Schism of the Three Chapters was a schism that affected the Catholic Church in North Italy lasting from 553 to 698 AD, although the area out of communion with Rome contracted throughout that time. It was part of a larger Three-Chapter Controversy that affected the whole of orthodox Christianity.[1]

Background to the Three-Chapter Controversy

The Three-Chapter Controversy came out of an attempt to reconcile the Non-Chalcedonian (Monophysite) Christians of the Middle East with the Chalcedonian Church. A major part of the attempted compromise was a condemnation of certain works of Eastern Christian writers such as Theodoret of Cyrus and Theodore of Mopsuestia soon became known as the Three Chapters. These were seen to be particularly objectionable by the opponents of the Council of Chalcedon and in an attempt to win them to the Council the condemnation was seen as a way of reassuring them.

The condemnation took place as an Imperial Edict around 543, this was accompanied by a Tome from Pope Leo I. There was some resistance in the Greek speaking, eastern part of the Church, although in the end the leading Eastern bishops did agree to condemn it. Those who would not condemn these works were accused of being sympathetic to the heresy of Nestorianism. 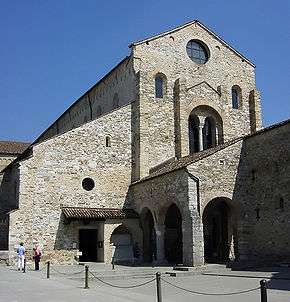 In 553 by council,[2] the bishops of Aquileia, Liguria, Aemilia, Milan and of the Istrian peninsula all refused to condemn the Three Chapters, arguing that to do so would be to betray Chalcedon. They broke off communion with Rome, under the leadership of Macedonius of Aquileia (535-556).

They in turn were anathematized by other churchmen.

The schism provided the opportunity for the bishop of Aquileia to assume the title Patriarch. Macedonius' successor Paulinus I (557-569) began using the title around 560.

By the end of the next decade, the Lombards had overrun all of northern Italy.

In 568, the patriarch of Aquileia, Paulinus, was obliged to flee, with the treasures of his church, to the little island of Grado, near Trieste, a last remnant of the Eastern Roman Empire in northern Italy and eight miles to the south of Aquileia. This political change did not affect the relations of the patriarchate with the Apostolic See; its bishops, whether in Lombard or imperial territory, stubbornly refused all invitations to a reconciliation. The Synod of Grado in 579 confirmed this position.

With the exception of the patriarch of Aquileia, these bishops and most of their suffragans were now subjects of the Lombards and beyond the reach of the Byzantine Exarch at Ravenna. As a result, they were able to maintain their dissent in support of the schism.

The Schism in Milan

Bishop Honoratus of Milan fled the city when it was besieged by the Lombard Alboin in 568. Honoratus sought refuge in Byzantine-controlled Genoa with a great number of his clergy. At his death there was a split with the Milanese clergy at Genoa electing Laurentius II, and the Christians remaining in Milan electing Fronto. Laurence subscribed to the condemnation while Fronto observed the schism with Rome.

Communion between Milan and Rome was restored around 581.

The Schism in Grado

The seat of the Patriarch of Aquileia stayed in Byzantine controlled Grado. The Byzantines allowed these freedom and archbishop Elias, already called patriarch by his suffragans, built a cathedral under the patronage of St. Euphemia as an unabashed statement of his adherence to the schism since it was the church of St. Euphemia in which the sessions of the Council of Chalcedon were approved. Gregory the Great's attempts at conciliation near the end of his pontificate, and especially through the Lombard queen, Theodelinda, began to have some effect.

Thus, in 606, Elias's successor Severus died and there were many clerics favorable to reconciliation. The Byzantines encouraged these to elect Candidianus who once elected promptly restored communion. Those of his suffragans whose sees lay within the empire joined him in submission to the Apostolic See.

The Split of the Patriarchate of Aquileia

The schism had deepened along political, Lombard-Roman lines. The Irish missionary Columbanus, who was ministering to the Lombards in Bobbio was involved in the first attempt to resolve this division through mediation between 612 and 615. Agilulf, King of the Lombards, persuaded him to address a letter on the schism to Boniface IV. He tells the pope that he is suspect of heresy for accepting the Fifth Ecumenical Council (the Second Council of Constantinople in 553), and exhorts him to summon a council and prove his orthodoxy.[4]

Historian Edward Gibbon theorized that Pope Honorius I reconciled the Patriarch to Rome in 638, although this did not last.[5]