For the church sometimes known as the Nestorian Church, see Church of the East.
"Nestorian" redirects here. For other uses, see Nestorian (disambiguation). 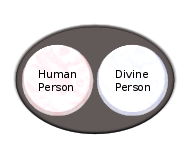 In the Nestorian view, the human and divine persons of Christ are separate.[1]

Nestorianism is a Christological doctrine that emphasizes a distinction between the human and divine natures of Jesus. It was advanced by Nestorius (386–450), Patriarch of Constantinople from 428 to 431, influenced by Nestorius's studies under Theodore of Mopsuestia at the School of Antioch.

Nestorius's teachings brought him into conflict with other prominent church leaders, most notably Cyril of Alexandria, who criticized especially his rejection of the title Theotokos ("Bringer-forth of God") for Mary, the mother of Jesus. Nestorius and his teachings were eventually condemned as heretical at the Council of Ephesus in 431 and the Council of Chalcedon in 451, which led to the Nestorian Schism; churches supporting Nestorius broke with the rest of the Christian Church.

Nestorianism is a form of dyophysitism, and can be seen as the antithesis to monophysitism, which emerged in reaction to Nestorianism. Where Nestorianism holds that Christ had two loosely united natures, divine and human, monophysitism holds that he had but a single nature, his human nature being absorbed into his divinity. A brief definition of Nestorianism Christology can be given as: "Jesus Christ, who is not identical with the Son but personally united with the Son, who lives in him, is one hypostasis and one nature: human;"[2] This contrasts with Nestorius' own teaching that the Word, which is eternal, and the Flesh, which is not, came together in a hypostatic union, 'Jesus Christ', Jesus thus being both fully man and God, of two ousia (Ancient Greek: οὐσία) but of one prosopon.[3] Both Nestorianism and monophysitism were condemned as heretical at the Council of Chalcedon. Monophysitism survived and developed into the Miaphysitism of the Oriental Orthodoxy.

Chinese stone inscription of a Nestorian Cross from a monastery of Fangshan District in Beijing (then called Dadu, or Khanbaliq), dated to the Yuan Dynasty (1271-1368 AD) of medieval China. 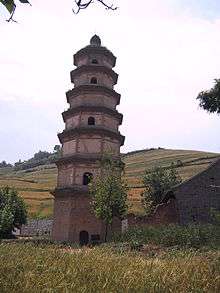 The Daqin Pagoda, part of an early Nestorian church in what was then Chang'an, now Xi'an, China, built during the Tang dynasty (618-907 AD)

Following the exodus to Iran, scholars expanded on the teachings of Nestorius and his mentors, particularly after the relocation of the School of Edessa to the Persian city of Nisibis (modern-day Nusaybin) in 489, where it became known as the School of Nisibis.

Nestorianism never again became prominent in the Roman Empire or later Europe, though the diffusion of the Church of the East in and after the seventh century, spread it widely across Asia.

Despite this initial Eastern expansion, the Nestorians' missionary success was eventually deterred. David J Bosch observes, "By the end of the fourteenth century, however, the Nestorian and other churches—which at one time had dotted the landscape of all of Central and even parts of East Asia—were all but wiped out. Isolated pockets of Christianity survived only in India. The religious victors on the vast Central Asian mission field of the Nestorians were Islam and Buddhism[.]"[4] 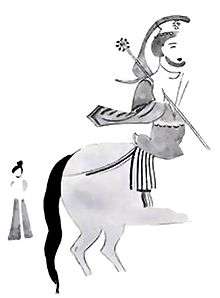 Entry of Jesus Christ into Jerusalem, with a female figure dressing in the T'ang dynasty costume, 683-770 A.D.

Nestorius developed his Christological views as an attempt rationally to explain and understand the incarnation of the divine Logos, the Second Person of the Holy Trinity as the man Jesus. He had studied at the School of Antioch where his mentor had been Theodore of Mopsuestia; Theodore and other Antioch theologians had long taught a literalist interpretation of the Bible and stressed the distinctiveness of the human and divine natures of Jesus. Nestorius took his Antiochene leanings with him when he was appointed Patriarch of Constantinople by Byzantine emperor Theodosius II in 428.

Nestorius's teachings became the root of controversy when he publicly challenged the long-used title Theotokos[5] (Bringer forth of God) for Mary. He suggested that the title denied Christ's full humanity, arguing instead that Jesus had two persons, the divine Logos and the human Jesus. As a result of this duality, he proposed Christotokos (Bringer forth of Christ) as a more suitable title for Mary.

Nestorius' opponents found his teaching too close to the heresy of adoptionism – the idea that Christ had been born a man who had later been "adopted" as God's son. Nestorius was especially criticized by Cyril of Alexandria, Patriarch of Alexandria, who argued that Nestorius's teachings undermined the unity of Christ's divine and human natures at the Incarnation. Some of Nestorius's opponents argued that he put too much emphasis on the human nature of Christ, and others debated that the difference that Nestorius implied between the human nature and the divine nature created a fracture in the singularity of Christ, thus creating two Christ figures.[6] Nestorius himself always insisted that his views were orthodox, though they were deemed heretical at the Council of Ephesus in 431, leading to the Nestorian Schism, when churches supportive of Nestorius and the rest of the Christian Church separated. A more elaborate Nestorian theology developed from there, which came to see Christ as having two natures united, or hypostases,[7] the divine Logos and the human Christ. However, this formulation was never adopted by all churches termed "Nestorian". Indeed, the modern Assyrian Church of the East, which reveres Nestorius, does not fully subscribe to Nestorian doctrine, though it does not employ the title Theotokos.[8]

Nestorianism became a distinct sect following the Nestorian Schism, beginning in the 430s. Nestorius had come under fire from Western theologians, most notably Cyril of Alexandria. Cyril had both theological and political reasons for attacking Nestorius; on top of feeling that Nestorianism was an error against true belief, he also wanted to denigrate the head of a competing patriarchate. Cyril and Nestorius asked Pope Celestine I to weigh in on the matter. Celestine found that the title Theotokos[9] was orthodox, and authorized Cyril to ask Nestorius to recant. Cyril, however, used the opportunity to further attack Nestorius, who pleaded with Emperor Theodosius II to call a council so that all grievances could be aired.[8]

In 431 Theodosius called the Council of Ephesus. However, the council ultimately sided with Cyril, holding that Christ is two natures in one person (hypostasis, subsistence), and that the Virgin Mary is the mother of God. The council accused Nestorius of heresy, and deposed him as patriarch.[10] Nestorianism was officially anathematized, a ruling reiterated at the Council of Chalcedon in 451. However, a number of churches, particularly those associated with the School of Edessa, supported Nestorius – though not necessarily his doctrine – and broke with the churches of the West. Many of Nestorius' supporters relocated to the Sasanian Empire of Iran, home to a vibrant but persecuted Christian minority.[11]

Nestorianism and the Persian Church 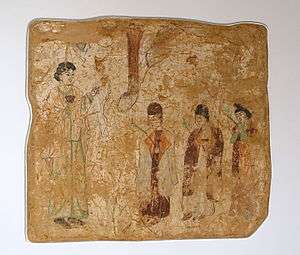 Nestorian priests in a procession on Palm Sunday, in a seventh- or eighth-century wall painting from a Nestorian church in Qocho, China 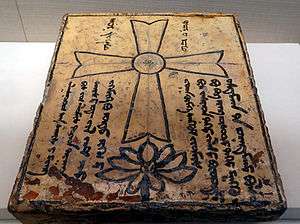 Epitaph of a Nestorian, unearthed at Chifeng, Inner Mongolia

Iran had long been home to a Christian community that had been persecuted by the Zoroastrian majority, which had accused it of Roman leanings. In 424, the Persian Church declared itself independent of the Byzantine and all other churches, in order to ward off allegations of foreign allegiance. Following the Nestorian Schism, the Persian Church increasingly aligned itself with the Nestorians, a measure encouraged by the Zoroastrian ruling class. The Persian Church became increasingly Nestorian in doctrine over the next decades, furthering the divide between Chalcedonian Christianity and the Nestorians. In 486 the Metropolitan of Nisibis, Barsauma, publicly accepted Nestorius' mentor, Theodore of Mopsuestia, as a spiritual authority. In 489 when the School of Edessa in Mesopotamia was closed by Byzantine Emperor Zeno for its Nestorian teachings, the school relocated to its original home of Nisibis, becoming again the School of Nisibis, leading to a wave of Nestorian immigration into Persia. The Persian patriarch Babai (497–502) reiterated and expanded upon the church's esteem for Theodore, solidifying the church's adoption of Nestorianism.[11]

Now firmly established in Iran, with centers in Nisibis, Ctesiphon, and Gundeshapur, and several metropolides, the Nestorian Persian Church began to branch out beyond the Sasanian Empire. However, through the sixth century, the church was frequently beset with internal strife and persecution by Zoroastrians. The infighting led to a schism, which lasted from 521 until around 539, when the issues were resolved. However, immediately afterward Roman-Persian conflict led to the persecution of the church by the Sassanid emperor Khosrow I; this ended in 545. The church survived these trials under the guidance of Patriarch Aba I, who had converted to Christianity from Zoroastrianism.[11]

The church emerged stronger after this period of ordeal, and increased missionary efforts farther afield. Missionaries established dioceses in the Arabian Peninsula and India (the Saint Thomas Christians). They made some advances in Egypt, despite the strong Miaphysite presence there.[12] Missionaries entered Central Asia and had significant success converting local Turkic tribes. Nestorian missionaries were firmly established in China during the early part of the Tang dynasty (618–907); the Chinese source known as the Nestorian Stele records a mission under a Persian proselyte named Alopen as introducing Nestorian Christianity to China in 635. Following the Muslim conquest of Persia, completed in 644, the Persian Church became a dhimmi community under the Rashidun Caliphate. The church and its communities abroad grew larger under the Caliphate; by the 10th century it had fifteen metropolitan sees within the Caliphate's territories, and another five elsewhere, including in China and India.[11]