Scientific American (informally abbreviated SciAm) is an American popular science magazine. Many famous scientists, including Albert Einstein, have contributed articles in the past 170 years. It is the oldest continuously published monthly magazine in the United States.

Scientific American was founded by inventor and publisher Rufus M. Porter in 1845[2] as a four-page weekly newspaper. Throughout its early years, much emphasis was placed on reports of what was going on at the U.S. Patent Office. It also reported on a broad range of inventions including perpetual motion machines, an 1860 device for buoying vessels by Abraham Lincoln, and the universal joint which now can be found in nearly every automobile manufactured. Current issues include a "this date in history" section, featuring excerpts from articles originally published 50, 100, and 150 years earlier. Topics include humorous incidents, wrong-headed theories, and noteworthy advances in the history of science and technology.

Porter sold the publication to Alfred Ely Beach and Orson Desaix Munn I a mere ten months after founding it. Until 1948, it remained owned by Munn & Company.[2] Under Orson Desaix Munn III, grandson of Orson I, it had evolved into something of a "workbench" publication, similar to the twentieth-century incarnation of Popular Science.

In the years after World War II, the magazine fell into decline. In 1948, three partners who were planning on starting a new popular science magazine, to be called The Sciences, purchased the assets of the old Scientific American instead and put its name on the designs they had created for their new magazine. Thus the partners—publisher Gerard Piel, editor Dennis Flanagan, and general manager Donald H. Miller, Jr.—essentially created a new magazine.[3] Miller retired in 1979, Flanagan and Piel in 1984, when Gerard Piel's son Jonathan became president and editor; circulation had grown fifteen-fold since 1948. In 1986, it was sold to the Holtzbrinck group of Germany, which has owned it since.

In the fall of 2008, Scientific American was put under the control of Nature Publishing Group, a division of Holtzbrinck.[4]

Donald Miller died in December 1998,[5] Gerard Piel in September 2004 and Dennis Flanagan in January 2005. Mariette DiChristina is the current editor-in-chief, after John Rennie stepped down in June 2009.[4]

Scientific American published its first foreign edition in 1890, the Spanish-language La America Cientifica. Publication was suspended in 1905, and another 63 years would pass before another foreign-language edition appeared: In 1968, an Italian edition, Le Scienze, was launched, and a Japanese edition, Nikkei Science (日経サイエンス), followed three years later. A new Spanish edition, Investigación y Ciencia was launched in Spain in 1976, followed by a French edition, Pour la Science, in France in 1977, and a German edition, Spektrum der Wissenschaft, in Germany in 1978. A Russian edition V Mire Nauki was launched in the Soviet Union in 1983, and continues in the present-day Russian Federation. Kexue (科学, "Science" in Chinese), a simplified Chinese edition launched in 1979, was the first Western magazine published in the People's Republic of China. Founded in Chongqing, the simplified Chinese magazine was transferred to Beijing in 2001. Later in 2005, a newer edition, Global Science (环球科学), was published instead of Kexue, which shut down due to financial problems. A traditional Chinese edition, known as 科學人 ("Scientist" in Chinese), was introduced to Taiwan in 2002, and has been developed to the best popular science magazine in Taiwan. The Hungarian edition Tudomány existed between 1984 and 1992. In 1986, an Arabic-edition, Oloom magazine (مجلة العلوم), was published. In 2002, a Portuguese edition was launched in Brazil.

From 1902 to 1911, Scientific American supervised the publication of the Encyclopedia Americana, which during some of that period was known as The Americana.

Cover of the September 1848 issue

It originally styled itself "The Advocate of Industry and Enterprise" and "Journal of Mechanical and other Improvements". On the front page of the first issue was the engraving of "Improved Rail-Road Cars". The masthead had a commentary as follows:

Scientific American published every Thursday morning at No. 11 Spruce Street, New York, No. 16 State Street, Boston, and No. 2l Arcade Philadelphia, (The principal office being in New York) by Rufus Porter. Each number will be furnished with from two to five original Engravings, many of them elegant, and illustrative of New Inventions, Scientific Principles, and Curious Works; and will contain, in high addition to the most interesting news of passing events, general notices of progress of Mechanical and other Scientific Improvements; American and Foreign. Improvements and Inventions; Catalogues of American Patents; Scientific Essays, illustrative of the principles of the sciences of Mechanics, Chemistry, and Architecture: useful information and instruction in various Arts and Trades; Curious Philosophical Experiments; Miscellaneous Intelligence, Music and Poetry. This paper is especially entitled to the patronage of Mechanics and Manufactures, being the only paper in America, devoted to the interest of those classes; but is particularly useful to farmers, as it will not only appraise them of improvements in agriculture implements, But instruct them in various mechanical trades, and guard them against impositions. As a family newspaper, it will convey more useful intelligence to children and young people, than five times its cost in school instruction. Another important argument in favor of this paper, is that it will be worth two dollars at the end of the year when the volume is complete, (Old volumes of the New York Mechanic, being now worth double the original cost, in cash.) Terms: The Scientific American will be furnished to subscribers at $2.00 per annum, - one dollar in advance, and the balance in six months. Five copies will be sent to one address six months for four dollars in advance. Any person procuring two or more subscribers, will be entitled to a commission of 25 cents each.

The commentary under the illustration gives the flavor of its style at the time:

There is perhaps no mechanical subject, in which improvement has advanced so rapidly, within the last ten years, as that of railroad passenger cars. Let any person contrast the awkward and uncouth cars of '35 with the superbly splendid long cars now running on several of the eastern roads, and he will find it difficult to convey to a third party, a correct idea of the vast extent of improvement. Some of the most elegant cars of this class, and which are of a capacity to accommodate from sixty to eighty passengers, and run with a steadiness hardly equaled by a steamboat in still water, are manufactured by Davenport & Bridges, at their establishment in Cambridgeport, Mass. The manufacturers have recently introduced a variety of excellent improvements in the construction of trucks, springs, and connections, which are calculated to avoid atmospheric resistance, secure safety and convenience, and contribute ease and comfort to passengers, while flying at the rate of 30 or 40 miles per hour.

Also in the first issue is commentary on Signor Muzio Muzzi's proposed device for aerial navigation. 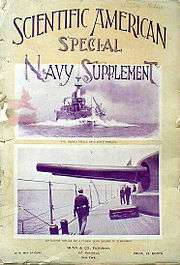 The Scientific American 50 award was started in 2002 to recognize contributions to science and technology during the magazine's previous year. The magazine's 50 awards cover many categories including agriculture, communications, defence, environment, and medical diagnostics. The complete list of each year's winners appear in the December issue of the magazine, as well as on the magazine's web site.

From 1983 to 1997, Scientific American has produced an encyclopedia set of volumes from their publishing division, the Scientific American Library. These books were not sold in retail stores, but as a Book of the Month club selection priced from $24.95 to $32.95. Topics covered dozens of areas of scientific knowledge and included in-depth essays on: The Animal Mind; Atmosphere, Climate, and Change; Beyond the Third Dimension; Cosmic Clouds; Cycles of Life • Civilization and the Biosphere; The Discovery Of Subatomic Particles; Diversity and the Tropical Rain Forest; Earthquakes and Geological Discovery; Exploring Planetary Worlds; Gravity's Fatal Attraction; Fire; Fossils And The History Of Life; From Quarks to the Cosmos; A Guided Tour Of The Living Cell; Human Diversity; Perception; The Solar System; Sun and Earth; The Science of Words (Linguistics); The Science Of Musical Sound; The Second Law (of Thermodynamics); Stars; Supercomputing and the Transformation of Science.[10]

In April 1950, the U.S. Atomic Energy Commission ordered Scientific American to cease publication of an issue containing an article by Hans Bethe that appeared to reveal classified information about the thermonuclear hydrogen bomb. Subsequent review of the material determined that the AEC had overreacted. The incident was important for the "new" Scientific American's history, as the AEC's decision to burn 3000 copies of an early press-run of the magazine containing the offending material appeared to be "book burning in a free society" when publisher Gerard Piel leaked the incident to the press.[11]

In its January 2002 issue, Scientific American published a series of criticisms of the Bjørn Lomborg book The Skeptical Environmentalist. Cato Institute fellow Patrick J. Michaels said the attacks came because the book "threatens billions of taxpayer dollars that go into the global change kitty every year."[12] Journalist Ronald Bailey called the criticism "disturbing" and "dishonest", writing, "The subhead of the review section, 'Science defends itself against The Skeptical Environmentalist,' gives the show away: Religious and political views need to defend themselves against criticism, but science is supposed to be a process for determining the facts."[13]

The publisher was criticized in 2009 when it notified collegiate libraries that subscribe to the journal that yearly subscription prices would increase by nearly 500% for print and 50% for online access to $1500 yearly.[16]

An editorial in the September 2016 issue of Scientific American has attacked US Presidential candidate Donald Trump for alleged "anti-science" attitudes and rhetoric. This marks the first time that the publication has forayed into commenting on US presidential politics. [17]

Top 10 Science Stories of the Year

In 2013, Dr. Danielle Lee, a female scientist who blogs at Scientific American, was called a "whore" in an email by an editor at the science website Biology Online after refusing to write professional content without compensation. When Lee, outraged about the email, wrote a rebuttal on her Scientific American blog, the editor-in-chief of Scientific American, Mariette DiChristina, removed the post, sparking an outrage by supporters of Lee. While DiChristina cited legal reasons for removing the blog, others criticized her for censoring Lee.[23][24][25][26] The editor at Biology Online was fired after the incident.[27]

The controversy widened in the ensuing days. The magazine's blog editor, Bora Zivkovic, was the subject of allegations of sexual harassment by another blogger, Monica Byrne.[28][29] Although the alleged incident had occurred about a year earlier, editor Mariette DiChristina informed readers that the incident had been investigated and resolved to Ms. Byrne's satisfaction.[30] However, the incident involving Dr. Lee had prompted Ms. Byrne to reveal the identity of Zivkovic, following the latter's support of Dr. Lee. Zivkovic responded on Twitter and his own blog, admitting the incident with Ms. Byrne had taken place.[31] His blog post apologized to Ms. Byrne, and referred to the incident as "singular", stating that his behavior was not "engaged in before or since."[31]

Due to the allegations, Zivkovic resigned from the board of Science Online, the popular science blogging conference that he helped establish.[32] Following Zivkovic's admission, several prominent female bloggers, including other bloggers for the magazine, wrote their own accounts that contradicted Zivkovic's assertions, alleging additional incidents of sexual harassment.[29][33][34][35] A day after these new revelations, Zivkovic resigned his position at Scientific American, according to a press release from the magazine.[36]