Gennett was drafted by the Milwaukee Brewers in the 16th round of the 2009 Major League Baseball Draft out of Sarasota High School in Sarasota, Florida.[1] 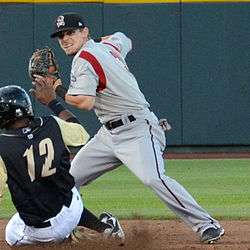 Gennett playing for the Nashville Sounds, triple-A affiliates of the Brewers, in 2013

Gennett represented the Brewers at the 2012 All-Star Futures Game.[2] Less than a year later on June 3, 2013, he was recalled from the Nashville Sounds, and made his major league debut against the Oakland Athletics. Gennett collected his first major league hit, a single to right-center, on June 5. Gennett hit his first major league home run on June 14 against Bronson Arroyo in his birthplace of Cincinnati.

Gennett was the left-handed part of a Milwaukee second base platoon (with Rickie Weeks) in 2014. The platoon ranked fourth in the National League in Wins Above Replacement at the All-Star Break.[3] Gennett did well against right-handed pitching, but keeping with what became problematic for him as he moved up through the minors, he struggled against same-handed opponents with only 4 hits and 1 walk in 37 plate appearances versus lefties through the All-Star Break.[4] On June 25, 2014, Gennett hit his first career grand slam off Stephen Strasburg. He finished the season in the majors.

After Weeks departed, Gennett started opening day 2015 for the Brewers as the primary second baseman. He started the season batting below .200 before went on the 15-day disabled list after cutting his hand in the shower.[5] He was sent down to the Colorado Springs Sky Sox, the new Brewers AAA team.[5] After spending about 1 month in the minors, he was recalled to the majors.[5] Gennett and the Brewers avoided salary arbitration on December 3, 2016, by agreeing to a one-year, $2.525 million contract for 2017.[6]

Gennett said he adopted the name as a 5-year-old fan of the Muppets character Scooter and used it as a permanent alias after his mother, Tina, tried to impart a lesson about buckling his seat belt with a trip to a police station for a lecture.

"I thought I was going to be arrested,” he said. “So, I told the policeman my name was Scooter. After we left there, I didn’t answer to Ryan because I thought if I answered to my real name I’d get arrested.”

He has been Scooter ever since. [9]