Seamanship is the art of operating a ship or boat.

The degree of knowledge needed within these areas is dependent upon the nature of the work and the type of vessel employed by a mariner.

Navigation is the art and science of safely and efficiently directing the movements of a vessel from one point to another. Piloting uses water depth and visible references, while dead reckoning uses courses and distances from the last known position.[1] More than just finding a vessel's present location, safe navigation includes predicting future location, route planning and collision avoidance. Nautical navigation in western nations, like air navigation, is based on the nautical mile. Navigation also includes electronics such as GPS and Loran (Long Range Navigation). Celestial navigation involves taking sights by sextant on the planets, moon, stars, sun and using the data with a nautical almanac and sight reduction tables to determine positions. Accurate time information is also needed. After nautical dusk, navigation at sea referencing the horizon is no longer possible, and after nautical dawn such navigation again becomes possible.[2]

A fundamental skill of professional seamanship is being able to maneuver a vessel with accuracy and precision. Unlike vehicles on land, a ship afloat is subject to the movements of the air around it and the water in which it floats. Another complicating factor is the mass of a ship that has to be accounted for when stopping and starting.

Ship-handling is about arriving and departing a berth or buoy, maneuvering in confined channels and harbours and in proximity to other ships, whilst at all times navigating safely. Two other types of operations, berthing alongside another ship and replenishment at sea, are occasionally included. A key ability for a ship-handler is a good understanding of how the wind, tide and swell, the passage of other vessels, as well as the shape of the seabed, will affect a vessel's movement, which, together with an understanding of a specific vessel's performance, should allow that vessel a safe passage.

Fundamental to low-speed maneuvering is an understanding of the configuration and handedness of the propeller(s). An effect known as propeller walk will kick the stern of the vessel to port or starboard depending on the configuration and the type of propeller when large variations on propeller rotation speed or changes of propeller rotation direction take place. (In single-screw vessels where the rotation of the propeller is reversed on an astern bell, a standard was established that the propeller would turn clockwise when viewed from astern. This would mean that the propeller would turn counterclockwise when going astern and the stern would walk to port. This aided in docking operations, where "port side to" was the preferred situation and the vessel would be brought to the dock with a small bow-in angle and backing would flatten the angle, slow or stop the vessel and walk it alongside. An exception to this was the U.S. Sealift class tankers, which used a controllable-pitch propeller, where the pitch and not the direction of rotation was reversed to go astern. These propellers rotated counterclockwise at all times and so the "walk" was "normal".) Other variations include what are known as bucket rudders such as the Kortz Nozzle where instead of a conventional rudder a pair of dish-shaped rudders, one either side of the propeller can be swivelled vertically to direct the propeller thrust through 360 degrees. Thus to put the vessel into astern mode the rudder can be rotated through 180 degrees without altering the speed and direction of the engine. Since with the conventional propeller or rudder configuration the propeller is designed to operate at maximum efficiency when going ahead, it produces far less thrust when going astern. But with the Kortz Nozzle, the ahead and astern thrust is the same. Other advantages of the nozzle are the ship can be steered astern which a conventional rudder cannot, and the ship can be steered fully under control to a standstill switching between ahead and astern mode to give complete control over speed. In addition to being fully conversant with the principles of seamanship and ship-handling, a good pilot will have developed his or her sense of 'situational awareness' to a point well beyond that of a member of a ship's crew; his reactions will appear to be instinctive, positive and at all times safe.

Most commercial vessels in excess of size limits determined by local authorities are handled in confined areas by a marine (or maritime) pilot. Marine pilots are seafarers with extensive seafaring experience and are usually qualified master mariners who have been trained as expert ship-handlers. These pilots are conversant with all types of vessel and propulsion systems, as well as handling ships of all sizes in all weather and tidal conditions. They are also experts in the geographical areas they work. In most countries, the pilot takes over the 'conduct' of the navigation from the ship master. This means that the master and crew should adhere to the pilot's orders in respect of the safe navigation of the vessel when in a compulsory pilotage area. The master may with good cause resume 'conduct' of the vessel's navigation. However this should never be done lightly. In situations where the pilot is an "advisor" even though he has the con, the pilot or his "Association" have no responsibility or liability in the case of an accident. The master, upon realizing there is a dangerous situation developing, must take such action as to avoid an accident or at least to minimize the damage from one that can't be avoided. In some countries and areas (e.g. Scandinavia and the U.S.A.), the pilot's role is as an advisor. However, in practice, they are likely to have the conduct of the vessel, especially on larger ships using tug boats to assist. The general rule of thumb is that a pilot assumes command of a vessel and is not classed as "an advisor" in the Panama Canal, crossing the sill of a drydock, or in any port in Russia (or, perhaps, all the old Soviet states). This distinction is important because when a pilot is in command, the master can not take any action, but is limited to advising the pilot on any circumstance that creates what he considers a dangerous situation. 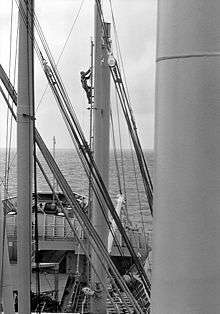 An able-bodied seaman climbs a kingpost to perform maintenance aboard a general cargo ship or freighter.

In the days before mechanical propulsion, an able seaman was expected to be able to "hand, and reef, and steer". Training is more formal in modern merchant marines and navies, but still covers the basics.

The crew of a large ship will typically be organized into "divisions" or "departments", each with its own specialty. For example, the deck division would be responsible for boat handling and general maintenance, while the engineering division would be responsible for propulsion and other mechanical systems. Crew start on the most basic duties and as they gain experience and expertise advance within their area. Crew who have gained proficiency become "able seamen", "petty officers", "rated", or "mates" depending on the organization to which they belong.

On smaller commercial craft, there is little or no specialization. Deck crew perform all boat handling functions. The officers of the ship are responsible for navigation, communication, and watch supervision.

Captains must pass formal examinations to demonstrate their knowledge. These examinations have a progression based on the size and complexity of the craft. In the U.S., the progression begins with what is known as "the six pack", a license that allows fishing guides to operate with up to six passengers.