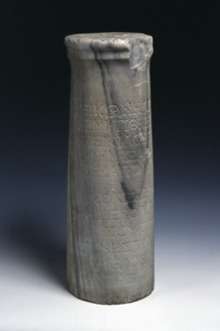 The Seikilos epitaph is the oldest surviving complete musical composition, including musical notation, from anywhere in the world. The epitaph has been dated variously from around 200 BC to around AD 100, but the first century AD is the most probable guess. The song, the melody of which is recorded, alongside its lyrics, in the ancient Greek musical notation, was found engraved on a tombstone (a stele) from the Hellenistic town Tralles near Aydın, Turkey, not far from Ephesus. It is a Hellenistic Ionic song in either the Phrygian octave species or Iastian tonos. While older music with notation exists (for example the Hurrian songs), all of it is in fragments; the Seikilos epitaph is unique in that it is a complete, though short, composition.[1] 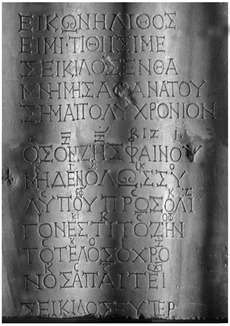 The inscription in detail

The following is the Greek text found on the tombstone (in the later polytonic script; the original is in majuscule),[2] along with a transliteration of the words which are sung to the melody, and a somewhat free English translation thereof; this excludes the musical notation:

meaning "Seikilos to Euterpe"; hence, according to this reconstruction, the tombstone and the epigrams thereon were possibly dedicated by Seikilos to Euterpe, who was possibly his wife.[4] (Euterpe is also the name of the Muse of music).

Another possible partial reconstruction could be

On the tombstone there is also an indication that states in Greek:

A free translation of this is "I am a tombstone, an image. Séikilos placed me here as a long-lasting sign of deathless remembrance".[6]

On the inscription and above each line of the lyrics (transcribed here in polytonic script), there is a line with letters and signs for the tune:[7]

Translated into modern musical notation, the tune is something like this:

Although the transcription of the melody is unproblematic, there is some disagreement about the nature of the melodic material itself. There are no modulations, and the notation is clearly in the diatonic genus, but while it is described on the one hand as being clearly in the diatonic Iastian tonos,[8] in other places it is said to "fit perfectly" within Ptolemy's Phrygian tonos,[9] since the arrangement of the tones (1 ½ 1 1 1 ½ 1 [ascending]) "is that of the Phrygian species" according to Cleonides.[10][11] The overall note series is alternatively described as corresponding "to a segment from the Ionian scale".[12] Another authority says "The scale employed is the diatonic octave from e to e (in two sharps). The tonic seems to be a; the cadence is a f♯ e. This piece is … [in] Phrygic (the D mode) with its tonic in the same relative position as that of the Doric.[1] Yet another author explains that the difficulty lies in the fact that "the harmoniai had no finals, dominants, or internal relationships that would establish a hierarchy of tensions and points of rest, although the mese (“middle note”) may have had a gravitational function". Although the epitaph's melody is "clearly structured around a single octave, … the melody emphasizes the mese by position … rather than the mese by function".[13]

The find has been dated variously from around 200 BC to around AD 100, but the first century AD is the most probable guess.[14] The date of the inscription itself is also a matter of some debate. One authority states that on grounds of paleography the inscription can be "securely dated to the first century C.E.",[6] while on the same basis (the use of swallow-tail serifs, the almost triangular Φ with prolongation below, ligatures between N, H, and M, and above all the peculiar form of the letter omega) another is equally certain it dates from the second century AD, and makes comparisons to dated inscriptions of 127/8 and 149/50 AD.[15]

Although the material on the Seikilos stele is sparse, it indicates that the Greeks had developed a musical system in the third or fourth century BC. It was probably only used by professional composers and choir leaders, while others learned the tunes by listening to them. Texts of plays, regardless of type, were often copied without music, so the lyrics with music like that of the Seikilos epitaph are extremely rare. There is no evidence that the Greek musical system survived into the Middle Ages, but texts from Byzantine times and the early Renaissance have added notations after the Greek system.

History of the stele's discovery and exhibition

The Epitaph was discovered in 1883 by Sir W. M. Ramsay in Tralleis, a small town near Aidin. According to one source the stele was then lost and rediscovered in Smyrna in 1922, at about the end of the Greco-Turkish War of 1919–1922.[14] According to another source the stele, having first been discovered during the building of the railway next to Aydin, had first remained at the possession of the building firm's director Edward Purser, where Ramsay found and published about it; in about 1893, as it "was broken at the bottom, its base was sawn off straight so that it could stand and serve as a pedestal for Mrs Purser's flowerpots"; this caused the loss of one line of text, i.e., while the stele would now stand upright, the grinding had obliterated the last line of the inscription. The stele next passed to Edward Purser's son-in-law, Mr Young, who kept it in Buca, Smyrna. It remained there until the defeat of the Greeks, having been taken by the Dutch Consul for safe keeping during the war; the Consul's son-in-law later brought it by way of Constantinople and Stockholm to The Hague; it remained therein until 1966, when it was acquired by the Department of Antiquites of the National Museum of Denmark (Nationalmuseet), a museum situated at Copenhagen. This is where the stele has since been located (inventory number: 14897).[12]