Not to be confused with self-compatibility in plants, the ability to form seed using self pollen 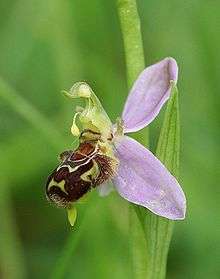 One type of automatic self-pollination occurs in the orchid Ophrys apifera. One of the two pollinia bends itself towards the stigma.

Self-pollination is when pollen from the same plant arrives at the stigma of a flower (in flowering plants) or at the ovule (in Gymnosperms). There are two types of self-pollination: In autogamy, pollen is transferred to the stigma of the same flower. In geitonogamy, pollen is transferred from the anther of one flower to the stigma of another flower on the same flowering plant, or from microsporangium to ovule within a single (monoecious) Gymnosperm. Some plants have mechanisms that ensure autogamy, such as flowers that do not open (cleistogamy), or stamens that move to come into contact with the stigma.

Few plants self-pollinate without the aid of pollen vectors (such as wind or insects). The mechanism is seen most often in some legumes such as peanuts. In another legume, soybeans, the flowers open and remain receptive to insect cross pollination during the day. If this is not accomplished, the flowers self-pollinate as they are closing. Among other plants that can self-pollinate are many kinds of orchids, peas, sunflowers and tridax. Most of the self-pollinating plants have small, relatively inconspicuous flowers that shed pollen directly onto the stigma, sometimes even before the bud opens. Self-pollinated plants expend less energy in the production of pollinator attractants and can grow in areas where the kinds of insects or other animals that might visit them are absent or very scarce—as in the Arctic or at high elevations.

Self-pollination limits the variety of progeny and may depress plant vigor. However, self-pollination can be advantageous, allowing plants to spread beyond the range of suitable pollinators or produce offspring in areas where pollinator populations have been greatly reduced or are naturally variable.

Pollination can also be accomplished by cross-pollination. Cross-pollination is the transfer of pollen, by wind or animals such as insects and birds, from the anther to the stigma of flowers on separate plants.

Types of flowers that self pollinate

Both hermaphrodite and monoecious species have the potential for self-pollination leading to self-fertilization unless there is a mechanism to avoid it. Eighty percent of all flowering plants are hermaphroditic, meaning they contain both sexes in the same flower, while 5 percent of plant species are monoecious. The remaining 15% would therefore be dioecious (each plant unisexual).

The disadvantages of self-pollination come from a lack of variation that allows no adaptation to the changing environment or potential pathogen attack. Self-pollination can lead to inbreeding depression, or the reduced health of the species, due to the breeding of related specimens. This is why many flowers that could potentially self-pollinate have a built-in mechanism to avoid it, or make it second choice at best. Genetic defects in self-pollinating plants cannot be eliminated by genetic recombination and offspring can only avoid inheriting the deleterious attributes through a chance mutation arising in a gamete.

About 42% of flowering plants exhibit a mixed mating system in nature.[1] In the most common kind of system, individual plants produce a single flower type and fruits may contain self-pollinated, out-crossed or a mixture of progeny types. Another mixed mating system is referred to as dimorphic cleistogamy. In this system a single plant produces both open, potentially out-crossed and closed, obligately self-pollinated cleistogamous flowers.[2]

The evolutionary shift from outcrossing to self-fertilization is one of the most common evolutionary transitions in plants. About 10-15% of flowering plants are predominantly self-fertilizing.[3] A few well-studied examples of self-pollinating species are described below.

Self-pollination in the slipper orchid Paphiopedilum parishii occurs when the anther changes from a solid to a liquid state and directly contacts the stigma surface without the aid of any pollinating agent.[4]

The tree-living orchid Holcoglossum amesianum has a type of self-pollination mechanism in which the bisexual flower turns its anther against gravity through 360° in order to insert pollen into its own stigma cavity---without the aid of any pollinating agent or medium. This type of self-pollination appears to be an adaptation to the windless, drought conditions that are present when flowering occurs, at a time when insects are scarce.[5] Without pollinators for outcrossing, the necessity of ensuring reproductive success appears to outweigh potential adverse effects of inbreeding. Such an adaptation may be widespread among species in similar environments.

In the Chinese herb Caulokaempferia coenobialis a film of pollen is transported from the anther (pollen sacs) by an oily emulsion that slides sideways along the flower’s style and into the individual’s own stigma.[6] The lateral flow of the film of pollen along the style appears to be due solely to the spreading properties of the oily emulsion and not to gravity. This strategy may have evolved to cope with a scarcity of pollinators in the extremely shady and humid habitats of C. coenobialis.

Capsella rubella (Red Shepard’s purse)[7][8] is a self-pollinating species that became self-compatible 50,000 to 100,000 years ago, indicating that self-pollination is an evolutionary adaptation that can persist over many generations. Its out-crossing progenitor was identified as Capsella grandiflora.

Arabidopsis thaliana is a predominantly self-pollinating plant with an out-crossing rate in the wild estimated at less than 0.3%.[9] A study suggested that self-pollination evolved roughly a million years ago or more.[10]

Meiosis followed by self-pollination produces little overall genetic variation. This raises the question of how meiosis in self-pollinating plants is adaptively maintained over extended periods (i. e. for at least 104 to 106 years) in preference to a less complicated and less costly asexual ameiotic process for producing progeny. An adaptive benefit of meiosis that may explain its long-term maintenance in self-pollinating plants is efficient recombinational repair of DNA damage.[11][12] This benefit can be realized at each generation (even when genetic variation is not produced).