The Marine Corps officer corps in the 1920s was relatively small and, by the start of the 1930s, the Marine Corps had yet to issue more than one thousand officer service numbers. In 1931, the number of possible officer numbers was increased to two thousand with this number not yet reached upon the outbreak of World War II in 1941.

During the early part Second World War, the Marine Corps extended their enlisted service numbers to the number one million with numbers broken down into sub-sections reserved for particular groups enlisting during World War II. The first group, ranging numbers 350,000 to 670,899, were standard Marine Corps enlistees joining for wartime service. Numbers 670,900 to 699,999 were never issued and 700,000 to 799,999 were reserved for female enlisted personnel. The female enlisted service numbers were also the only numbers assigned a prefix code, as the letter W was used to denote female Marine Corps enlisted. 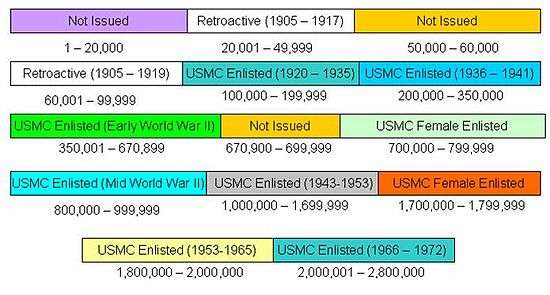