Sheppard Robson (previously Richard Sheppard, Robson & Partners ) is a British architecture firm, founded in 1938 by Sir Richard Herbert Sheppard, with offices in London, Manchester, Glasgow, and Abu Dhabi. It was particularly influential in the 1950s-1960s, pioneering the use of concrete shell structures, and in the present day as a leader in sustainable architecture, building the UK's first net zero carbon house in 2007 as well as designing the LEED Platinum Siemens Middle East Headquarters at Masdar[1] City, which completed in 2014. The latter project was cited as exemplifying “a new generation [that] has emerged [at the practice], which is balancing performance, especially of the sustainable variety, with form” . The practice has offices in London, Manchester, Glasgow and Abu Dhabi and in the 2000s established an award-winning interior design group, ID:SR Sheppard Robson.

Sheppard Robson was founded in 1938 by Richard Sheppard, (later knighted for his work in architecture), a technically skilled designer with a talent for developing new materials, who was disabled as a teenager by polio, and Jean Shufflebottom, his wife, a gifted architect in her own right. The company’s first big success was the Jicwood Bungalow in 1944, which used materials from aircraft manufacture. By 1950 the company had built a reputation for large modern projects, and Richard Sheppard had a new business partner, Geoffrey Robson, who added his name to the company’s. At first they specialized in schools, building more than 80 in the 1950s. In 1958 the company won a competition to design a science college and memorial to Winston Churchill - Churchill College, Cambridge. Later they branched out into other public buildings, and by the 1970s they had built a strong reputation in commercial and retail buildings.

In the 1990s and 2000s the company entered a period of growth with innovative, often large-scale buildings like The Helicon, Toyota/Lexus HQ, MediaCityUK, the Lighthouse, Barking Riverside and Siemens HQ Middle East. Many of these were important landmarks in the development of sustainable architecture. For instance, the Lighthouse was the UK’s first net zero carbon house, the Helicon was an early sustainable office/retail building, and MediaCityUK was built as a sustainable community, verified by international sustainability regulator BREEAM (the first corporate building to achieve this).

The practice's recently completed and ongoing projects include the transformation of an urban block in London's Fitzrovia (Fitzroy Place), the completion of a new science building at the University of Hertfordshire, and the creation of new residential-led neighbourhoods of 1500 homes at Queen Elizabeth Olympic Park (East Wick and Sweetwater). 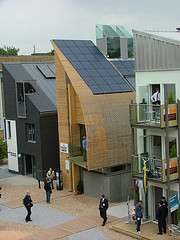 Sheppard Robson is known for sustainable architecture, which it helped to pioneer in the early 1990s with buildings like the Helicon and the Lighthouse, which was the UK’s first net zero-carbon house. Lancaster Institute for the Contemporary Arts, completed in 2010, was the first college or university to win a BREEAM Outstanding rating for sustainability. The Helicon was an early sustainable office/shop building, and MediaCityUK was built as a sustainable community, verified by the international sustainability regulator BREEAM (the first corporate building to achieve this).