The Abbey Church of St Mary the Virgin at Sherborne in the English county of Dorset, is usually called Sherborne Abbey. It has been a Saxon cathedral (705–1075), a Benedictine abbey (998–1539), and now, a parish church.

There may have been a Celtic Christian church called 'Lanprobi' at the site, and Kenwalc or Cenwalh, King of the West Saxons is believed to be one of its founders.[1]

When the Saxon Diocese of Sherborne was founded in 705 by King Ine of Wessex, he set Aldhelm as first Bishop of the see of Western Wessex, with his seat at Sherborne. Aldhelm was the first of twenty-seven Bishops of Sherborne.[1][2]

The twentieth bishop was Wulfsige III (or St. Wulfsin). In 998 he established a Benedictine abbey at Sherborne and became its first abbot. In 1075 the bishopric of Sherborne was transferred to Old Sarum, so Sherborne remained an abbey church but was no longer a cathedral. The bishop (in Old Sarum) remained the nominal head of the abbey until 1122, when Roger de Caen, Bishop of Salisbury, made the abbey independent.

The Benedictine foundation at Sherborne ended in the Dissolution of the Monasteries in 1539, when the abbey was surrendered to King Henry VIII. Various properties at Sherborne were bought from the king by Sir John Horsey who then sold the abbey to the people of Sherborne, who bought the building to be their parish church (as people of many other places did), which it still is. The original parish church alongside the abbey was demolished, though the foundations are still visible. In 1550, King Edward VI issued a new charter to the school that had existed at Sherborne since 705, and some of the remaining abbey buildings were turned over to it. 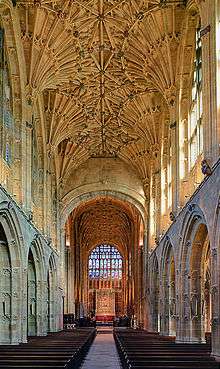 The nave and chancel looking east

The Abbey is a Grade I listed building.[5] It has several distinct architectural styles throughout. Saxon features still remain in some parts of the Abbey, mainly around the Western door. Roger of Caen demolished most of the Saxon church and replaced it with a much larger, Norman style church.

The Lady Chapel and Bishop Robert's Chapel were added in the 13th century in the Early English style, and in the 15th century, the choir section was rebuilt in the Perpendicular style, including the fan-vaulting Sherborne is still famous for, the remodelling by William Smyth, under Abbot John Brunyng (1415–1436). The vaulting is believed to have finished in 1490.[1]

During this renovation, a riot in the town caused a fire that damaged much of the renovation,[2] causing delays. Traces of the fire's effects can still be seen in the reddening of the walls under the Tower. The fire and its effects also caused the design of the Nave to be altered. Some of the Nave's pillars are Norman piers cased in Perpendicular panelling.[1]

St Katherine's Chapel, built in the 14th century, but altered in the 15th, contains examples of early Renaissance classicism architecture [6]

The North Choir Aisle contains two tombs, believed to be the tombs of King Æthelbald of Wessex and his brother King Ethelbert of Wessex, elder brothers to Alfred the Great.[1][7]

Inside the Wykeham chapel is the tomb of Sir John Horsey and his son. Horsey had bought the church after the Dissolution of the Monasteries and sold it to the townspeople. Also in the Chapel is the plainly marked tomb of the poet Sir Thomas Wyatt.[8]

The South Transept contains an impressive baroque memorial to John Digby, 3rd Earl of Bristol, made of marble and designed by John Nost.[9] Additionally there is a memorial to Robert and May Digby.[1]

The Digby Memorial, situated outside the Abbey, is a memorial to George Digby who provided a lot of funding for renovation work during the 19th century. It was built in 1884 and features statues of St Aldhelm, Bishop Roger of Salisbury (Roger de Caen), Abbot Bradford and Sir Walter Raleigh.[10] 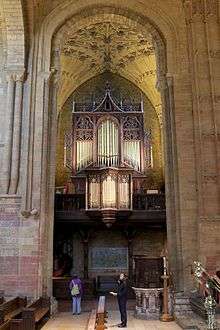 The organ in the north transept

The Abbey's organ, located in the North Transept was installed in 1856[11] by Gray & Davison, and completely rebuilt in 1955 by J. W. Walker & Sons Ltd, though that restoration's action failed by 1987 and had to be replaced. The proposed scheme by Bishops supported by John Norman, Cecil Clutton and Patrick Moule favoured returning the organ to its Gray & Davison past but including a 'Chair' section instead of the Choir in order to try to overcome the difficulties of the position of the organ was bold but hardly in keeping historically and proved a to be musically and mechanically a disaster and increasingly unreliable so that after no more than twenty years it was necessary for the Organ to be rebuilt again in 2003/04 by Kenneth Tickell, so thoroughly as to make it effectively a new instrument in the old case. An additional nave organ was added, located under the West Window.[1][12]

Memorial to George Edwin Lyle
This list is incomplete; you can help by expanding it.

The Abbey has two reredos. The more recent is in the Lady Chapel, and was designed by Laurence Whistler in 1969, and fashioned in glass.[25] The second, more substantial reredos was installed in 1884 and designed by RH Carpenter.[26]

The Abbey contains a number of stained glass windows, including the South Transept's Te Deum window designed by Pugin.[1][27]

The Great East Window was designed by Clayton and Bell and installed in 1856–58. It features the Apostles Mark, Luke, Matthew and John, and Saints Sidwell and Juthware (Juthwara), who is featured in the Sherborne Missal.[28] The glass in the Southern Aisle commemorates Sherborne School For Girls' 1949 Jubilee.[1][29]

The Lady Chapel glass comes from the 1930s, and depicts St Aldhelm presenting a model of his church to the Patron.[30]

The Great West Window is the newest of the major windows designed and made by John Hayward (1929-2007), being installed in 1997 to replace a poor quality, faded, Pugin conceived glass. The new glass depicts the Patron and the baby Jesus, the Biblical Magi and the Shepherds, the Genesis story, the fall of man and the Easter story.[31]

The Abbey contains ten 15th century misericords, situated 5 on each side of the choir. These depict such things as the last judgement of Christ, and gurning.

The Abbey Tower contains the heaviest ring of 8 church bells in the world with a tenor of 46cwt and 5 lbs (just over 2 and 1/4 tons).