Worcester Cathedral, before the English Reformation known as Worcester Priory, is an Anglican cathedral in Worcester, England; situated on a bank overlooking the River Severn. It is the seat of the Bishop of Worcester. Its official name is The Cathedral Church of Christ and the Blessed Mary the Virgin of Worcester. Built between 1084 and 1504, Worcester Cathedral represents every style of English architecture from Norman to Perpendicular Gothic. It is famous for its Norman crypt and unique chapter house, its unusual Transitional Gothic bays, its fine woodwork and its "exquisite" central tower,[1] which is of particularly fine proportions.[1][2]

The cathedral's west facade appeared, with a portrait of Sir Edward Elgar, on the reverse of £20 note issued by the Bank of England between 1999 and 2007, remaining in circulation as legal tender until 30 June 2010.[3][4] 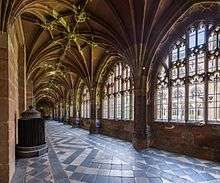 What is now the Cathedral was founded in 680 as a Priory, with Bishop Bosel at its head. The first priory was built in this period, but nothing now remains of it. The crypt of the present-day cathedral dates from the 10th century and the time of St Oswald, Bishop of Worcester.

Monks and nuns had been present at the Priory since the seventh century (see Bede). The monastery became Benedictine in the second half of the tenth century (one author gives the time range 974-977, another considers 969 more likely). There is an important connection with Fleury Abbey in France, as Oswald, bishop of Worcester from 961 to 992, and prior at the same time, was professed at Fleury and introduced the monastic rule of Fleury to Worcester.[5][6] Remains of the Priory dating from the 12th and 13th centuries can still be seen. The Priory came to an end with King Henry VIII's Dissolution of the Monasteries, and the Benedictine monks were removed on 18 January 1540 and replaced by secular canons.

The former monastic library of Worcester contained a considerable number of manuscripts which are, among other libraries, now scattered over Cambridge, London (British Library), Oxford Bodleian, and the Cathedral library at Worcester of today.[7]

Following the Dissolution of the Monasteries, the former Priory was re-established as a cathedral of secular clergy. In the 1860s the cathedral was subject to major restoration work planned by Sir George Gilbert Scott and A. E. Perkins.

An image of the cathedral's west facade appeared on the reverse of the Series E British £20 note commemorating Sir Edward Elgar, issued between 1999 and 2007.[8] 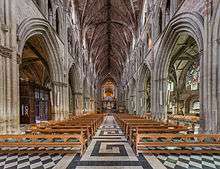 Worcester Cathedral embodies many features that are highly typical of an English medieval cathedral. Like the cathedrals of Salisbury and Lincoln, it has two transepts crossing the nave, rather than the single transept usual on the Continent. This feature of English Cathedrals was to facilitate the private saying of the Holy Office by many clergy or monks. Worcester is also typical of English cathedrals in having a chapter house and cloister. To the north side of the cathedral is an entrance porch, a feature designed to eliminate the draught which, prior to the installation of modern swing doors, would blow through cathedrals whenever the western doors were open.

Worcester Cathedral has important parts of the building dating from every century from the 11th to the 16th. Its tower in the Perpendicular style is described by Alec Clifton-Taylor as "exquisite"[1] and is seen best across the River Severn.[2]

The earliest part of the building at Worcester is the multi-columned Norman crypt with cushion capitals remaining from the original monastic church begun by bishop Saint Wulfstan of Worcester in 1084. Also from the Norman period is the circular chapter house of 1120, made octagonal on the outside when the walls were reinforced in the 14th century. The nave was built and rebuilt piecemeal and in different styles by several different architects over a period of 200 years, from 1170 to 1374, some bays being a unique and decorative transition between Norman and Gothic.[1][9] The oldest parts show alternate layers of green sandstone from Highley in Shropshire and yellow Cotswold limestone.[10] 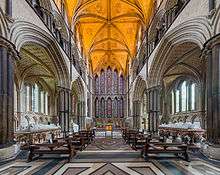 The lady chapel and east window 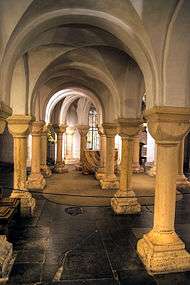 The east end was rebuilt over the Norman crypt by Alexander Mason between 1224 and 1269, coinciding with, and in a very similar Early English style to Salisbury Cathedral. From 1360 John Clyve finished off the nave, built its vault, the west front, the north porch and the eastern range of the cloister. He also strengthened the Norman chapter house, added buttresses and changed its vault. His masterpiece is the central tower of 1374, originally supporting a timber, lead-covered spire, now gone. Between 1404 and 1432 an unknown architect added the north and south ranges to the cloister, which was eventually closed by the western range by John Chapman, 1435–38. The last important addition is Prince Arthur’s Chantry Chapel to the right of the south choir aisle, 1502–04.[1][9]

Worcester Cathedral was extensively restored from 1857 to 1874 by W. A. Perkins and Sir George Gilbert Scott. Most of the fittings and the stained glass date from this time. Some early 17th century screens and panelling, removed from the choir and organ casing in 1864, are now at Holy Trinity Church, Sutton Coldfield.[11] 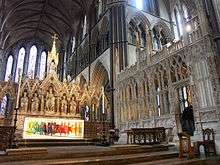 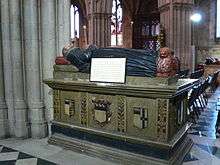 Tomb chest in the nave. 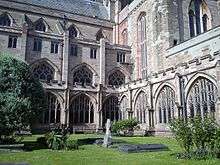 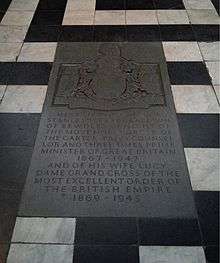 Grave of Stanley Baldwin and his wife Lucy

The Cathedral contains the tomb of King John in its chancel. Before his death in Newark in 1216, John had requested to be buried at Worcester. He is buried between the shrines of St Wulstan and St Oswald (now destroyed).

The cathedral has a memorial, Prince Arthur's Chantry, to the young prince Arthur Tudor, who is buried here. Arthur's younger brother and next in line for the throne was Henry VIII. Worcester Cathedral suffered badly from Iconoclasm but was spared total destruction by Henry VIII during the English Reformation because of his brother's chantry in the cathedral.

An epitaph in Latin to a headmaster Henry Bright of King's College, Worcester can be found near the north porch.[14] Other notable burials include:

The Cathedral Library at Worcester, located since the 19th century in the loft above the South Nave, contains nearly 300 medieval manuscripts, 55 incunabula, and 5500 post-medieval printed books. Of particular note are the Worcester Antiphoner (the only book of its kind to survive the Reformation), the will of King John and a 1225 copy of Magna Carta.[24] The large scriptorium at Worcester produced many manuscripts and was a place of work for many famous scribes, such as the chronicler John of Worcester and the unnamed monk identified by his distinctive handwriting as The Tremulous Hand of Worcester.[25]

Thirty nine of the misericords date from 1379 and include a complete set of the Labours of the Months. The subject matter includes biblical stories, mythology and folklore including N-07, The Clever Daughter which shows a naked woman draped in a net, riding a goat and carrying a rabbit under her arm. Three of the misericords are Victorian replacements such as N-02, Judas in the jaws of Satan.

The tower has a ring of twelve bells plus three semitone bells and a non-swinging bourdon.[26] The current peal of 15 ringing bells were cast in 1928 by John Taylor & Co., of Loughborough, from the metal of the original ring cast in 1869. The ring is the fifth heaviest ring of twelve in the world, only the bells in the cathedrals of Liverpool, Exeter, York and St Paul's, London are heavier. The bells are also considered to be one of the finest toned rings ever cast. The bells hang in a wooden frame that was constructed in 1869 for the previous ring. Worcester Cathedral is unique in having a purpose-built teaching centre equipped with eight special training bells, linked to computers.[26] 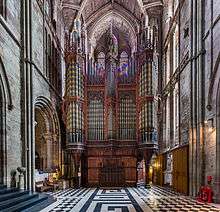 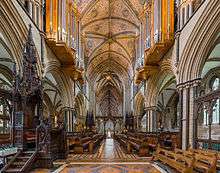 The composer Edward Elgar spent most of his life in Worcestershire. The first performance of the revised version of his Enigma Variations – the version usually performed – took place at the cathedral during the 1899 Three Choirs Festival. He is commemorated in a stained glass window which contains his portrait.

Worcester Cathedral has a long history of organs dating back to at least 1417. There have been many re-builds and new organs in the intervening period, including work by Thomas Dallam, William Hill and most famously Robert Hope-Jones in 1896. The Hope-Jones organ was heavily re-built in 1925 by Harrison & Harrison, and then regular minor works kept it in working order until Wood Wordsworth and Co. were called in 1978. It was a large four-manual organ with 61 speaking stops. It had a large Gothic Revival case with heavily decorated front pipes as well as two smaller cases either side of the quire.[28]

This organ (apart from the large transept case and pedal pipes) was removed in 2006 in order to make way for a new instrument by Kenneth Tickell, which was completed in the summer of 2008.[29] The nave has a separate three-manual Rodgers organ.[30]

Worcester Cathedral is the host of the annual graduation ceremonies for the University of Worcester. These ceremonies are presided over by the Vice Chancellor of the University, and take place over four days in November.[31]