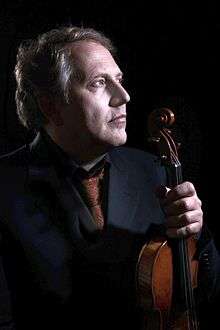 Shlomo Mintz (Hebrew: שלמה מינץ) (born 30 October 1957) is an Israeli violin virtuoso, violist and conductor. He regularly appears with orchestras and conductors on the international scene and is heard in recitals and chamber music concerts around the world.[1]

Shlomo Mintz was born in Moscow. In 1959, at the age of two, his family immigrated to Israel, where he studied with Ilona Feher, one of the last representatives of the Central European violin school. Feher introduced Shlomo Mintz to Isaac Stern, who became his mentor. He was also a student of Dorothy DeLay in New York.

Mintz began his career at age 11 as a soloist with the Israel Philharmonic Orchestra. Soon afterwards, he was called on a week's notice by Zubin Mehta to play Paganini's Violin Concerto No. 1, Op. 6, with the orchestra when Itzhak Perlman fell ill. He made his Carnegie Hall debut at the age of sixteen with the Pittsburgh Symphony Orchestra under the auspices of Isaac Stern and the American-Israel Cultural Foundation, and subsequently studied with Dorothy DeLay at the Juilliard School of Music in New York. At the age of 20, he made an extensive tour through Europe with famous conductors such as Carlo Maria Giulini, Antal Dorati and Eugene Ormandy. He also signed, still in his early twenties, a recording contract with Deutsche Grammophon.

In 1997 he played Paganini's famous "Il Cannone", a violin made by Italian luthier Giuseppe Guarneri del Gesù in 1742, during a special concert in Maastricht in the Netherlands with the Limburg Symphony Orchestra and conductor Yoel Levi, which was arranged on the initiative of a Dutch television network (TROS) and aired on TV in December 1997. In 2012, he celebrated his 50th year on the concert stage.

Career as conductor and artistic director

At the age of eighteen, Mintz launched a parallel career as a conductor, and has since led acclaimed orchestras worldwide including the Royal Philharmonic (United Kingdom), the NHK Symphony (Japan) and the Israel Philharmonic. He was music advisor of the Israel Chamber Orchestra from 1989 to 1993, and in March 1994 was appointed artistic advisor and principal guest conductor of the Maastricht Symphony in the Netherlands, which he led for some weeks during four seasons, sometimes as both conductor and violin soloist. In 2008, he became principal guest conductor of the Zagreb Philharmonic. From 2002 to 2012, he was artistic director of the Sion-Valais International Music Festival.

From 2002 to 2011, he was jury president of the Sion Valais-International Violin Competition in Switzerland.[3]

He was one of the founders of the Keshet Eilon International Violin Mastercourse in Israel, an advanced-level summer program for young talented violinists from all around the world in Kibbutz Eilon, Israel, and served as a patron there for eighteen years (1992-2010).

Mintz is one of the main actors in the "Violins of Hope" project together with violinmaker Amnon Weinstein. Twenty-four violins once owned by players who lost their lives in ghettos and concentration camps during World War II were restored by Weinstein and have been used on several occasions. Eighteen of them were exhibited in 2010 for the first time at a world premiere in Sion (Valais), along with pictures of Lucille Reyboz and videos by Blue Press Agency. The Violins of Hope participated in several events throughout the world (Paris, Maastricht, Istanbul, London, Madrid, Cleveland and Charlotte (USA)), and were first heard again during a concert in Jerusalem for the sixtieth anniversary celebration of the State of Israel in 2008.

In May 2006, Mintz received an honorary doctorate from the Ben-Gurion University of the Negev in Be’er Sheva, Israel.