Shri Hanuman Mandir, Sarangpur is a Hindu temple located in Sarangpur, Gujarat and comes under the Vadtal Gadi of the Swaminarayan Sampraday. It is the only Swaminarayan Temple which does not have the Murtis of either Swaminarayan or Krishna as the Primary deity of worship. [1] It is dedicated to Hanuman in the form of Kastbhanjan (Crusher of sorrows).[2] 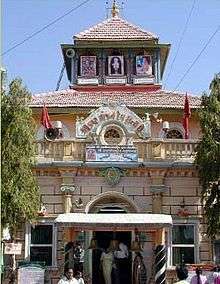 The temple complex before renovation

This temple is among the more prominent ones in the Swaminarayan Sampraday. The idol of Hanuman was installed by Sadguru Gopalanand Swami. According to author Raymond Williams, it is reported that when Sadguru Gopalanand Swami installed the idol of Hanuman, he touched it with a rod and the idol came alive and moved. This story has become a charter for the healing ritual performed at this temple.[1] The idol of Hanuman here is a stout figure with a handlebar moustache, crushing a female demon under his foot and baring his teeth, standing among sculpted foliage full of fruit bearing monkey attendants.[2] In 1899, Kothari Gordhandas of Vadtal appointed Shastri Yagnapurushdas to manage the affairs of the mandir; during his tenure, Shastri Yagnapurushdas renovated the site, built the adjacent bungalow, and acquired more land for the complex to bring it to its current state.[3]

The image of this temple is said to be so powerful that a mere look at it will drive the evil spirits out of the people affected by them.[4] Saturday is the designated day for a special ritual (as Saturday is dedicated to Hanuman) for those affected by mental illnesses and other disorders. They are brought to the temple to be touched by the rod used by Sadguru Gopalanand Swami during the installation ceremony of the image. This rod has now been covered in silver. The temple administration has hired a brahmin householder to act as a priest at the temple and conduct this ritual. After this, the person affected is instructed to circumambulate the shrine and repeat this after doing darshan a number of times. Some people take a special vow to do this a certain number of times or to chant the Swaminarayan Mahamantra while doing this.[1]