"Sideshow Bob Roberts" is the fifth episode of The Simpsons' sixth season. It originally aired on the Fox network in the United States on October 9, 1994. Kelsey Grammer returns as Sideshow Bob, who, in this episode, wins the Springfield mayoral election through electoral fraud. The episode was written by Bill Oakley and Josh Weinstein, and directed by Mark Kirkland. Oakley and Weinstein drew inspiration for the episode from the Watergate scandal, and included many cultural references to political films, as well as real-life events. These included the film All the President's Men and the first televised debate between Richard Nixon and John F. Kennedy during the 1960 United States presidential election.

The episode received a favorable reception in the media, including a positive mention in I Can't Believe It's a Bigger and Better Updated Unofficial Simpsons Guide and Green Bay Press-Gazette. A review in Press & Sun-Bulletin placed the episode as the seventh best of the series.

In prison, Sideshow Bob calls local right-wing talk show host Birch Barlow and complains about being unfairly imprisoned. Barlow and Springfield's residents pressure Mayor Quimby into releasing Bob. Bob is soon unveiled as the Republican candidate for the Springfield mayoral election. Determined to keep Bob from becoming mayor, Bart and Lisa decide to campaign for Quimby. Unfortunately, due to Bob's charisma and Quimby's drowsy, overmedicated appearance at a televised debate, Bob wins the election by a massive margin.

Bart and Lisa begin to suspect that Bob somehow rigged the election. Lisa goes through the voting records but is unable to find any proof that the election was rigged. Lisa receives a message from Waylon Smithers telling her to find a voter named Edgar Neubauer, who will lead them to evidence of electoral fraud.

Eventually, Bart discovers the name Edgar Neubauer on a tombstone at the cemetery. Lisa then discovers that many of those listed as voting for Bob are long dead. At the trial that follows, they trick Bob into confessing his crime. The court strips Bob of his position and sends him back to prison, while Quimby regains his job as mayor. 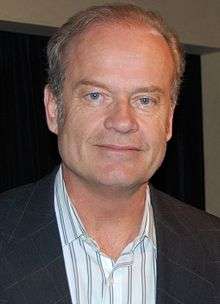 The episode was the fourth appearance of Kelsey Grammer as Sideshow Bob.

Although the episode primarily mocks the Republican Party, the writers included several jokes at the expense of the Democratic Party, liberal and conservative politics, to try to be as neutral as possible.[2] Writers Bill Oakley and Josh Weinstein were very interested in the Watergate scandal and based a lot of the second act on that.[3] Mark Kirkland directed the episode.[1]

The episode sees Kelsey Grammer return as Sideshow Bob for his fourth appearance. Clips from previous episodes featuring Bob were used to remind viewers who he was and what he had done.[2] Bob's Cape Fear musical cue from the episode "Cape Feare" is also reused.[3] Showrunner David Mirkin found directing Grammer "a joy". Dr. Demento also guest-starred, as did Larry King for the second time,[2] while Henry Corden voices Fred Flintstone.[4] One of the prisoners in Bob's campaign advert is a caricature of producer Richard Sakai.[2] The "Les Wynan" joke was pitched by Mike Reiss.[3] The episode does not feature a chalkboard or couch gag, cutting straight from the clouds to the TV. Some syndication edits have included a couch gag.[4]

The episode contains the first use of the word "meh" in the show.[5] The word, which was later included in the Collins English Dictionary, is credited as being popularized by the show, principally following its usage in the season twelve episode "Hungry, Hungry Homer".[6][7][8] In "Sideshow Bob Roberts", the word is used by the librarian who provides Lisa with the town's voting records, in response to her questioning their unclassified nature.[5]

Much of the episode is based on the Watergate scandal, as well as other real-life political events.[3] The two Republicans who follow Bob around were based on H. R. Haldeman and John Ehrlichman, two of Richard Nixon's closest advisors during Watergate.[3] Sideshow Bob's campaign advert was based on the famous Willie Horton and Revolving Door political advertisements used by George H. W. Bush during the 1988 United States presidential election.[3][9] Birch Barlow's question to Mayor Quimby about whether his stance on crime would differ if it was his family being attacked is a reference to Bernard Shaw's similar question to Democratic candidate Michael Dukakis during the 1988 presidential debates.[3] Quimby's appearance during the debate parodies Richard Nixon's appearance during his first televised debate with John F. Kennedy during the 1960 presidential election. Nixon had recently recovered from a cold, and sweated considerably throughout, something that was detrimental to the impression he made in the debate.[3] 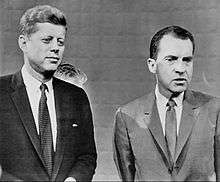 Quimby's appearance in his debate was based on Richard Nixon's in a debate with John F. Kennedy before the 1960 presidential election.

Many political films are also referenced. The episode features several references to the film All the President's Men, which chronicled Bob Woodward and Carl Bernstein's investigation of the Watergate scandal. These include the pull-out of Lisa looking over the voting records, the music, and the clandestine meeting with Smithers in a parking garage.[3] The end court scene, as well as Sideshow Bob's speech, echo the 1992 film A Few Good Men, including Jack Nicholson's speech with the line "You can't handle the truth".[2][4] Bob's sudden confession that he did rig the election was a vague reference to "every episode of Perry Mason".[10] Sideshow Bob gives his acceptance speech underneath a giant poster with a picture of himself on it; this is a reference to the campaign speech scene in Citizen Kane.[4] The title of the episode and several plot elements, including Bob entering Burns' meeting draped in an American flag, are references to the 1992 film Bob Roberts.[3][4]

The Springfield Minimum Security Prison is a parody of Allenwood Minimum Security Prison.[9] When Lisa drives, she is listening to "St. Elmo's Fire" by John Parr,[4] a choice David Mirkin found "very sad".[2] Archie Comics characters Archie Andrews, Reggie Mantle, Moose Mason and Jughead Jones are shown throwing Homer on the Simpsons' lawn and warning him to "stay out of Riverdale!"[1][2] Some of the deceased voters are Buddy Holly, Ritchie Valens and The Big Bopper, who all died in a plane crash on February 3, 1959.[11] The epitaph on The Big Bopper's gravestone is "Gooooodbye, Baby!" a reference to the opening line of his song "Chantilly Lace" - "Hellooo Baby!".[2] Finally, the Simpsons' home being demolished to make way for a bypass is a very slight reference to the opening of The Hitchhiker's Guide to the Galaxy.[2]

David L.G. Arnold comments in the book Leaving Springfield that the episode is a satire on "society's lazy, uninformed attitude about the electoral process", as well as "a comment on the role in society of a cadre of elites (the Republican party) who see themselves as naturally suited to lead". The episode also portrays Republicans as willing to break the law in order to achieve this; in this case, Bob commits electoral fraud. This is most displayed in Bob's line: "Your guilty conscience may force you to vote Democratic, but deep down inside you secretly long for a cold-hearted Republican to lower taxes, brutalize criminals, and rule you like a king. That's why I did this: to protect you from yourselves."[12]

Matthew Henry writes in the same book that the episode "well illustrates the battle of [political] ideologies [...] and its engagement with the politics of sexuality". He refers to the scene where Smithers intimates that Bob rigged the election; his motivation for whistleblowing is Bob's conservative policies, which disagree with his "choice of lifestyle", namely his homosexuality. Henry concludes the scene shows that conservative politics and homosexuality "cannot coexist" and that the scene marks the point where Smithers' sexuality became "public and overtly political".[13]

In its original broadcast, "Sideshow Bob Roberts" finished tied for 64th place in the weekly ratings for the week of October 3 to October 9, 1994, with a Nielsen rating of 8.6. It was the sixth highest rated show on the Fox network that week.[14]

Warren Martyn and Adrian Wood, the authors of the book I Can't Believe It's a Bigger and Better Updated Unofficial Simpsons Guide, noted the episode was: "A stunningly outspoken political satire that drew considerable disapproval from the Republican Party when it was aired."[4] Eric Reinagel, Brian Moritz, and John Hill of the Press & Sun-Bulletin named "Sideshow Bob Roberts" as the seventh best episode of the series.[15] Thomas Rozwadowski of Green Bay Press-Gazette placed the episode among his list of the ten best episodes of the show which have lessons: "Corrupt politicians always get their comeuppance. Or not." He also highlighted Bob's campaign advert and Kent Brockman's line: "And the results are in. For Sideshow Bob, 100 percent. For Joe Quimby, 1 percent. And we remind you, there is a 1 percent margin of error."[16]

The episode has been used in a course at Columbia College Chicago. The course titled "The Simpsons as Satirical Authors" featured "Sideshow Bob Roberts" as one of the episodes screened for the "What's (Not) Wrong with America? Critiquing the U.S. Government" topic.[17]