The Boston Globe is an American daily newspaper based in Boston, Massachusetts. Founded in 1872 by Charles H. Taylor, it was privately held until 1973, when it went public as Affiliated Publications. The company was acquired in 1993 by The New York Times Company; two years later Boston.com was established as the newspaper's online edition. In 2011, a BostonGlobe.com subscription site was launched. In 2013, the newspaper and websites were purchased by John W. Henry, a businessman whose other holdings include the Boston Red Sox and Liverpool F.C.

The Boston Globe has been awarded 23 Pulitzer Prizes since 1966, and its chief print rival is the Boston Herald.[4] 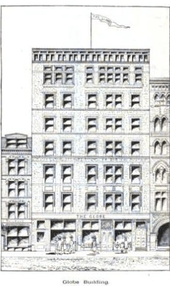 The old Globe headquarters on Washington Street (part of the Boston Advertiser's building can be seen just to the right).

The Boston Globe was founded in 1872 by six Boston businessmen, including Charles H. Taylor and Eben Jordan, who jointly invested $150,000 (worth $2,967,917 today). The first issue was published on March 4, 1872, and cost four cents. Originally a morning daily, it began a Sunday edition in 1877, which absorbed the rival Boston Weekly Globe in 1892.[5] In 1878, The Boston Globe started an afternoon edition called The Boston Evening Globe, which ceased publication in 1979. By the 1890s, The Boston Globe had become a stronghold, with an editorial staff dominated by Irish Catholics.[6]

In 1964, Tom Winship succeeded his father, Larry Winship, as editor. The younger Winship transformed The Globe from a mediocre local paper into a regional paper of national distinction. He served as editor until 1984, during which time the paper won a dozen Pulitzer Prizes, the first in the paper's history.

The Boston Globe was a private company until 1973 when it went public under the name Affiliated Publications. It continued to be managed by the descendants of Charles H. Taylor. In 1993, The New York Times Company purchased Affiliated Publications for US$1.1 billion, making The Boston Globe a wholly owned subsidiary of The New York Times' parent.[7][8] The Jordan and Taylor families received substantial New York Times Company stock, but the last Taylor family members left management in 2000–2001.

Boston.com, the online edition of The Boston Globe, was launched on the World Wide Web in 1995.[9] Consistently ranked among the top ten newspaper websites in America,[10] it has won numerous national awards and took two regional Emmy Awards in 2009 for its video work.[11]

Under the helm of editor Martin Baron and then Brian McGrory, The Globe shifted away from coverage of international news in favor of Boston-area news.[12] Globe reporters Michael Rezendes, Matt Carroll, Sacha Pfeiffer and Walter Robinson and editor Ben Bradlee Jr. were an instrumental part of uncovering the Roman Catholic Church sex abuse scandal in 2001–2003, especially in relation to Massachusetts churches. They were awarded the Pulitzer Prize for their work, one of several the paper has received for its investigative journalism,[13] and their work was dramatized in the 2015 Academy Award winning film Spotlight, named after the paper's in-depth investigative division.

The Boston Globe is credited with allowing Peter Gammons to start his Notes section on baseball, which has become a mainstay in all major newspapers nationwide. In 2004, Gammons was selected as the 56th recipient of the J. G. Taylor Spink Award for outstanding baseball writing, given by the BBWAA, and was honored at the Baseball Hall of Fame on July 31, 2005.

In 2007, Charlie Savage, whose reports on President Bush's use of signing statements made national news, won the Pulitzer Prize for National Reporting.

The Boston Globe has consistently been ranked in the forefront of American journalism. Time magazine listed it as one of the ten best US daily newspapers in 1974 and 1984, and the Globe tied for sixth in a national survey of top editors who chose "America's Best Newspapers" in the Columbia Journalism Review in 1999. 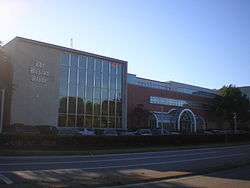 The Boston Globe hosts 28 blogs covering a variety of topics including Boston sports, local politics and a blog made up of posts from the paper's opinion writers.[14]

On April 2, 2009, The New York Times Company threatened to close the paper if its unions did not agree to $20,000,000 of cost savings.[15][16] Some of the cost savings include reducing union employees' pay by 5%, ending pension contributions, ending certain employees' tenures.[15][16] The Boston Globe eliminated the equivalent of fifty full-time jobs; among buy-outs and layoffs, it swept out most of the part-time employees in the editorial sections. However, early on the morning of May 5, 2009, The New York Times Company announced it had reached a tentative deal with the Boston Newspaper Guild, which represents most of the Globe's editorial staff, that allowed it to get the concessions it demanded. The paper's other three major unions had agreed to concessions on May 3, 2009, after The New York Times Company threatened to give the government 60-days notice that it intended to close the paper.[17] Despite the cuts helping to "significantly [improve]" its financial performance by October of that year, the The Globe's parent company indicated that it was considering strategic alternatives for the paper, but did not plan to sell it.[18] In September 2011, The Boston Globe launched a dedicated, subscription-based website at bostonglobe.com.[19]

In February 2013, The New York Times Company announced that it would sell the New England Media Group, which encompasses the Globe ; bids were received by six parties, of them included John Gormally (owner of television stations in Western Massachusetts), another group included members of former Globe publishers, the Taylor family, and Boston Red Sox principal owner John W. Henry, who bid for the paper through the New England Sports Network (majority owned by Fenway Sports Group alongside the Boston Bruins). However, after the NESN group dropped out of the running to buy the paper, Henry made his own separate bid to purchase The Globe in July 2013.[20][21] On October 24, 2013, he took ownership of The Globe, at a $70 million purchase price.[22][23] On January 30, 2014, Henry named himself publisher and named Mike Sheehan, a prominent former Boston ad executive, to be CEO.[24]

In July 2016, the 815,000-square-foot headquarters located in Dorchester was sold to an unknown buyer for an undisclosed price.[25] The Globe will be moving their entire operations in early 2017 to Myles Standish Industrial Park located in Taunton, Massachusetts.

At The Boston Globe, as is customary in the news industry, the editorial pages are separate from the news operation. Editorials represent the official view of The Boston Globe as a community institution. The publisher reserves the right to veto an editorial and usually determines political endorsements for high office.[26] Ellen Clegg, a long-time Globe journalist and former top spokeswoman for the newspaper, was named editor of the Editorial Page in 2015.[27]

The Globe has a long tradition of being a progressive institution, and especially on social issues. We are pro-choice; we're against the death penalty; we're for gay rights. But if people read us carefully, they will find that on a whole series of other issues, we are not knee-jerk. We're for charter schools; we're for any number of business-backed tax breaks. We are a lot more nuanced and subtle than that liberal stereotype does justice to.[28]

Appearing in the Sunday paper almost every week is The Boston Globe Magazine. As of 2013, Susanne Althoff is the editor.

On October 23, 2006, The Boston Globe announced the publication of Design New England: The Magazine of Splendid Homes and Gardens. The glossy oversized magazine is published six times per year.[29]

Bostonian of the Year

In 1998, columnist Patricia Smith was forced to resign after it was discovered that she had fabricated people and quotations in several of her columns.[52] In August of that year, columnist Mike Barnicle was discovered to have copied material for a column from a George Carlin book, Brain Droppings. He was suspended for this offense, and his past columns were reviewed. In their review, The Boston Globe editors found that Barnicle had fabricated a story about two cancer patients, and Barnicle was forced to resign.[53]

In 2004, the Globe apologized for printing graphic photographs that the article represented as showing U.S. soldiers raping Iraqi women during the Iraq war. The photos had already been found by other news organizations to be from an internet pornography site.[54][55]

In the spring of 2005, The Boston Globe retracted a story describing the events of a seal hunt near Halifax, Nova Scotia that took place on April 12, 2005. Written by freelancer Barbara Stewart, a former The New York Times staffer, the article described the specific number of boats involved in the hunt and graphically described the killing of seals and the protests that accompanied it. In reality, weather had delayed the hunt, which had not yet begun the day the story had been filed, proving that the details were fabricated.[56][57]

The Boston Globe maintains two distinct major websites: BostonGlobe.com is a subscriber-supported site with a paywall and content from the printed paper; and Boston.com, one of the first regional news portals, is supported by advertising. Between September 2011 and March 2014, the Globe gradually withdrew stories written by Globe journalists from Boston.com, making the sites more and more separated.[58] BostonGlobe.com was designed to emphasize a premium experience focusing on content and emulating the visual appearance of The Boston Globe newspaper; the site was one of the first major websites to use a responsive design which automatically adapts its layout to a device's screen size. Boston.com followed suit in 2014. The two sites are aimed towards different readers; while Boston.com became targeted towards "casual" readers and local content, the new Boston Globe website is targeted towards the audience of the paper itself.[59][60][61]

In 2012, the Society for News Design selected BostonGlobe.com as the world's best-designed news website.[62]

Boston Globe Media Partners, which owns the Globe operates a number of websites covering certain niche subjects. The sites share many resources, like office space, with the Globe, but are often branded separately from the newspaper:

BDCwire was launched in 2013. It covers local entertainment and similar subjects and is geared toward a young audience, from college age to early 30s.[63]

Crux was launched in September 2014.[58][64][65] It covered the Catholic Church and numerous subjects concerning life as a Catholic in the United States, including advice columns. Crux featured deep coverage of the Holy See and employed a Vatican correspondent in its six-person editorial staff. Its associate editor was John L. Allen Jr., a long-time and well-known Vatican watcher. At the end of March 2016, The Globe ended its association with Crux, tranferring ownership of the website to the Crux staff. With Allen as the new editor, Crux entered a partnership with the Knights of Columbus.[65][66]

BetaBoston, launched in 2014, covers the local technology industry in Boston, its suburbs and New England as a whole.

Stat, launched in 2015, covers health, medicine and life sciences, with a particular focus on the biotechnology industry based in and around Boston. Stat employs journalists in Boston, Washington, D.C., New York City and San Francisco.[67]