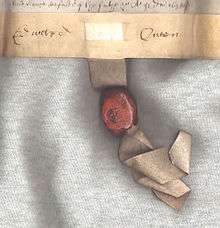 Pine resin seal on vellum tag or tail of an English deed (1638).

Sigillography (sometimes referred to under its Greek name of Sphragistics) is one of the auxiliary sciences of history. It refers to the study of seals attached to documents as a source of historical information. It concentrates on the legal and social meaning of seals, as well as the evolution of their design. It has links to diplomatics, heraldry, social history, and the history of art.

Antiquaries began to record historic seals in the 15th century, and in the 16th and 17th centuries their study became a fairly widespread antiquarian activity.[1][2] The term sigillography is first found in the works of Jean Mabillon in the late 17th century, and in those of Johann Michael Heineccius soon afterwards. Initially thought of as a branch of diplomatics, the discipline gradually became an independent branch of historical studies.

In the second half of the 19th century sigillography was further developed by German and French historians, among them Hermann Grotefend, Otto Posse, Louis-Claude Douet d'Arcq and Germain Demay.

Sigillography is also an important subdiscipline of Byzantine studies, involving the study of Byzantine lead seal impressions and the text and images thereon. Its importance derives from both the scarcity of surviving Byzantine documents themselves, and from the large number (over 40,000) of extant seals.[3] One of the largest compendiums of Byzantine seals can be found in the large-volume by Gustave Schlumberger, "Sigillographie de l'empire Byzantin," published in 1904.[4]

Sigillography features in the plot of "King Ottokar's Sceptre", one of The Adventures of Tintin.

This article is issued from Wikipedia - version of the 10/27/2015. The text is available under the Creative Commons Attribution/Share Alike but additional terms may apply for the media files.