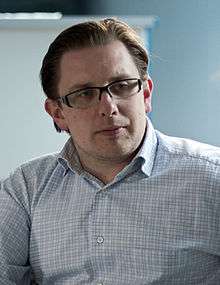 Simon Emil Ammitzbøll (born 20 October 1977 in Hillerød) is a Danish politician, and member of the Parliament of Denmark for the classical liberal party Liberal Alliance.

On 10 October 2008 he and a number of followers founded the party Borgerligt Centrum (English: Civic Centre).[1]

On 13 October 2008 he left the Social Liberal Party, which he had represented in parliament since the 2005 elections.

On 6 January 2009 the incorporation of Borgerligt Centrum was announced.

On 16 June 2009, he announced that he had joined Liberal Alliance and dissolved Borgerligt Centrum.[2] The dissolution was strongly contested by those members of the board who did not follow him in leaving the party.[3]

He is notable for being the only Danish member of parliament to have been member of three different parties in less than a year.

The remaining board members of the Borgerligt Centrum initiated legal proceedings against Simon Emil Ammitzbøll. They argued that he had violated a number of party by-laws. His attempt to dissolve the party had been exercised through coercion and without observing the articles of association. The party is still active with new leadership.

Simon Emil Ammitzbøll is openly gay, and is in civil partnership with another man, Henning Olsen.[4] Henning died in August, 2016, after a long battle with cancer.[5]