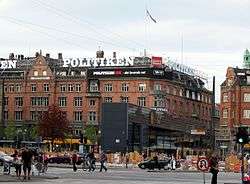 Politiken (Danish pronunciation: [poliˈtiɡən]) is a leading Danish daily broadsheet newspaper, published by JP/Politikens Hus in Copenhagen, Denmark. It was founded in 1884 and played a role in the formation of the Danish Social Liberal Party. Since 1970 it has been independent of the party but maintains a liberal and centre-left stance. It now runs an online newspaper, politiken.dk. The paper's design won several international awards, and a number of its journalists won the Cavling Prize.

Dagbladet Politiken was founded on 1 October 1884[1][2] in Copenhagen by Viggo Hørup, Edvard Brandes and Hermann Bing.[3][4] Hørup and Brandes formed the newspaper after being fired as editors from the Morgenbladet over political differences. Hørup led the paper as editor-in-chief[5] for fifteen years from its start in 1884.[6]

In 1904, the tabloid Ekstra Bladet was founded as a supplement to Politiken and was later spun off as an independent newspaper on 1 January 1905. The paper established its present location in central Copenhagen at The City Hall Square in 1912.

The newspaper also publishes an international edition named Politiken Weekly which compiles the most important stories of the week for Danes living abroad.

On 28 April 1940, three weeks after the German invasion of Denmark, Politiken ran an editorial in which Winston Churchill was called "a dangerous man". The editorial was written by foreign affairs editor Einard Schou after a conversation in the editor-in-chief's office with chairman of the board and soon-to-be-again Danish foreign minister Erik Scavenius. The aim is thought to have been to please the German occupation force, though no other Danish newspaper took such steps at the time. Usually, it was enough to keep within the newly introduced censorship. The article led to 15,000 readers, about 10% of subscribers, cancelling their subscriptions in protest.[10]

During the early 1900s Politiken had a cultural radical political stance.[11] Historically the paper was connected to the Danish Social Liberal Party (Det Radikale Venstre),[7] but the newspaper declared its political independence in 1970. The paper has a far-leaning social, liberal and centre-left stance.[9][12]

In February 2010 the editor in chief at the time Tøger Seidenfaden apologized to anyone who was offended by the newspaper's decision to reprint the cartoon drawing by Kurt Westergaard depicting Muhammed with a bomb in his turban, which was originally published in Morgenavisen Jyllands-Posten. Seidenfaden explained that "Politiken has never intended to reprint the cartoon drawing as a statement of editorial opinion or values but merely as part of the newspaper's news coverage".[13]

Its online newspaper, politiken.dk, received around 800,000 monthly users in 2011 and was the tenth most viewed page among the members of the Association of Danish Interactive Media.[26]

Internationally, Politiken has received recognition for its design through the form of several awards. In 2012 Politiken was declared 'World's Best' along with four other newspapers in a competition carried out by the Society for News Design.[27] In 2014 the paper was chosen as one of Scandinavia’s best-designed newspapers in the Best of Scandinavian News Design competition.[28]

Politiken has also been known for its photography. Jan Grarup, winner of several World Press Photo Awards and numerous other prizes, was a staff photographer from 2003 until 2009.[31]

Cavlingprisen ("The Cavling Award") is a Danish honorary award for journalism. It was named after a former reporter and editor-in-chief at Politiken Henrik Cavling.

Politiken has had a number of editors in chief since its inception. In some periods there were more than one editor at a time, causing overlap.