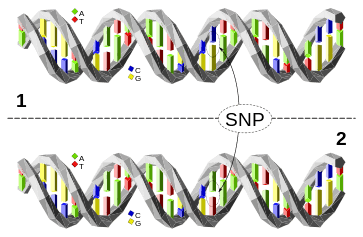 A single-nucleotide polymorphism, often abbreviated to SNP (pronounced snip; plural snips), is a variation in a single nucleotide that occurs at a specific position in the genome, where each variation is present to some appreciable degree within a population (e.g. > 1%).[1]

SNPs underlie differences in our susceptibility to disease; a wide range of human diseases, e.g. sickle-cell anemia, β-thalassemia and cystic fibrosis result from SNPs.[2][3][4] The severity of illness and the way our body responds to treatments are also manifestations of genetic variations. For example, a single base mutation in the APOE (apolipoprotein E) gene is associated with a higher risk for Alzheimer's disease.[5] 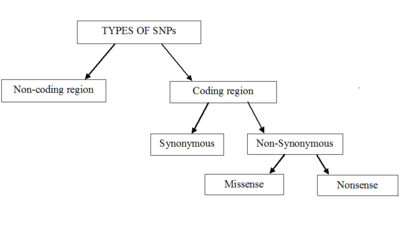 Single-nucleotide polymorphisms may fall within coding sequences of genes, non-coding regions of genes, or in the intergenic regions (regions between genes). SNPs within a coding sequence do not necessarily change the amino acid sequence of the protein that is produced, due to degeneracy of the genetic code.

SNPs that are not in protein-coding regions may still affect gene splicing, transcription factor binding, messenger RNA degradation, or the sequence of non-coding RNA. Gene expression affected by this type of SNP is referred to as an eSNP (expression SNP) and may be upstream or downstream from the gene.

The genomic distribution of SNPs is not homogenous; SNPs occur in non-coding regions more frequently than in coding regions or, in general, where natural selection is acting and 'fixing' the allele (eliminating other variants) of the SNP that constitutes the most favorable genetic adaptation.[8] Other factors, like genetic recombination and mutation rate, can also determine SNP density.[9]

SNP density can be predicted by the presence of microsatellites: AT microsatellites in particular are potent predictors of SNP density, with long (AT)(n) repeat tracts tending to be found in regions of significantly reduced SNP density and low GC content.[10]

There are variations between human populations, so a SNP allele that is common in one geographical or ethnic group may be much rarer in another. Within a population, SNPs can be assigned a minor allele frequency — the lowest allele frequency at a locus that is observed in a particular population. This is simply the lesser of the two allele frequencies for single-nucleotide polymorphisms.

Variations in the DNA sequences of humans can affect how humans develop diseases and respond to pathogens, chemicals, drugs, vaccines, and other agents. SNPs are also critical for personalized medicine.[11]

SNPs were used initially for matching a forensic DNA sample to a suspect but it has been phased out with development of STR based DNA fingerprinting technique.[13] In future SNPs may be used in forensics for some phenotypic clues like eye color, hair color, ethnicity etc. Kidd etal has demonstrated that a panel of 19 SNP can identify the ethnic group with good probability of match (Pm = 10^-7) in 40 population groups studied.[14] One example of how potentially this might be useful is in the area of artistic reconstruction of possible premortem appearances of skeletonized remains of unknown individuals. Although a facial reconstruction can be fairly accurate based strictly upon anthropological features, other data that might allow a more accurate representation include eye color, skin color, hair color, etc.

In a situation of low amount of forensic sample or degraded sample, the SNP can be a good alternative to STR because of abundance of potential markers, amenability to automation, and potential reduction in required fragment length to only 60-80 bp.[15] In absence of a STR match in DNA profile database; different SNPs can be used to get clues regarding ethnicity, phenotype, lineage and even identity.

Some SNPs are associated with the metabolism of different drugs.[16][17][18] The association of a wide range of human diseases like cancer, infectious diseases (AIDS, leprosy, hepatitis, etc.) autoimmune, neuropsychiatric and many other diseases with different SNPs can be made as relevant pharmacogenomic targets for drug therapy.[19]

A single SNP may cause a Mendelian disease, though for complex diseases, SNPs do not usually function individually, rather, they work in coordination with other SNPs to manifest a disease condition as has been seen in Osteoporosis.[20]

All types of SNPs can have an observable phenotype or can result in disease:

As there are for genes, bioinformatics databases exist for SNPs.

The International SNP Map working group mapped the sequence flanking each SNP by alignment to the genomic sequence of large-insert clones in Genebank. These alignments were converted to chromosomal coordinates that is shown in Table 1.[34]

The nomenclature for SNPs can be confusing: several variations can exist for an individual SNP and consensus has not yet been achieved. One approach is to write SNPs with a prefix, period and "greater than" sign showing the wild-type and altered nucleotide or amino acid; for example, c.76A>T.[35][36][37] SNPs are frequently referred to by their dbSNP rs number, as in the examples above.

Programs for prediction of SNP effects

An important group of SNPs are those that corresponds to missense mutations causing amino acid change on protein level. Point mutation of particular residue can have different effect on protein function (from no effect to complete disruption its function). Usually, change in amino acids with similar size and physico-chemical properties (e.g. substitution from leucine to valine) has mild effect, and opposite. Similarly, if SNP disrupts secondary structure elements (e.g. substitution to proline in alpha helix region) such mutation usually may affect whole protein structure and function. Using those simple and many other machine learning derived rules a group of programs for the prediction of SNP effect was developed: