Sir Alfred James Munnings, KCVO, PRA (8 October 1878 – 17 July 1959) was known as one of England's finest painters of horses, and as an outspoken critic of Modernism. Engaged by Lord Beaverbrook's Canadian War Memorials Fund, he earned several prestigious commissions after the Great War that made him wealthy.

Alfred Munnings was born on 8 October 1878 at Mendham, Suffolk, across the River Waveney from Harleston in Norfolk. His father ran a water-mill on the river at Mendham. At fourteen he was apprenticed to a Norwich printer, designing and drawing advertising posters for the next six years, attending the Norwich School of Art in his spare time. When his apprenticeship ended, he became a full-time painter. The loss of sight in his right eye in an accident in 1898 did not deflect his determination to paint, and in 1899 two of his pictures were shown at the Royal Academy Summer Exhibition.[1] He painted rural scenes, frequently of subjects such as Gypsies[2] and horses. He was associated with the Newlyn School of painters, and while there met Florence Carter-Wood (1888–1914), a young horsewoman and painter. They married on 19 January 1912 but she tried to kill herself on their honeymoon and did so in 1914.[3] Munnings bought Castle House, Dedham, in 1919, describing it as 'the house of my dreams'.[4] He used the house and adjoining studio extensively throughout the rest of his career, and it was opened as the Munnings Art Museum in the early 1960s, after Munnings' death.[5] Munnings remarried in 1920; his second wife was another horsewoman, Violet McBride. There were no children from either marriage. Although his second wife encouraged him to accept commissions from society figures, Munnings became best known for his equine painting: he often depicted horses participating in hunting and racing. 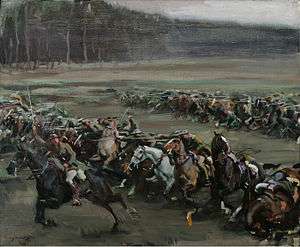 Although he volunteered to join the Army, he was assessed as unfit to fight. In 1917, his participation in the war was limited to a civilian job outside Reading, processing tens of thousands of Canadian horses en route to France — and often to death. Later, he was assigned to one of the horse remount depots on the Western Front.[6] Munnings' talent was employed in his position as war artist to the Canadian Cavalry Brigade, under the patronage of Max Aitken in the latter part of the war. During the war he painted many scenes, including a mounted portrait of General Jack Seely Warrior in 1918 (now in the collection of the National Gallery of Canada, Ottawa).[7] Munnings worked on this canvas a few thousand yards from the German front lines. When General Seely's unit was forced into a hasty withdrawal, the artist discovered what it was like to come under shellfire.[8]

Munnings also painted Charge of Flowerdew's Squadron in 1918.[9] In what is known as "the last great cavalry charge" at the Battle of Moreuil Wood, Gordon Flowerdew was posthumously awarded the Victoria Cross for leading Lord Strathcona's Horse (Royal Canadians) in a successful engagement with entrenched German forces.[10]

The Canadian Forestry Corps invited Munnings to tour their work camps, and he produced drawings, watercolors and paintings, including Draft Horses, Lumber Mill in the Forest of Dreux in France in 1918.[11] This role of horses was critical and under-reported; and in fact, horse fodder was the single largest commodity shipped to the front by some countries.[12]

Munnings was elected president of the Royal Academy of Art in 1944. He was made a Knight Bachelor in 1944,[14] and appointed a Knight Commander of the Royal Victorian Order in the 1947 New Year Honours.[15] His presidency is best known for the valedictory speech he gave in 1949, in which he attacked modernism. The broadcast was heard by millions of listeners to BBC radio. An evidently inebriated Munnings claimed that the work of Cézanne, Matisse and Picasso had corrupted art. He recalled that Winston Churchill had once said to him, "Alfred, if you met Picasso coming down the street would you join with me in kicking his ... something something?" to which Munnings said he replied, "Yes Sir, I would".

Munnings died at Castle House, Dedham, Essex, on 17 July 1959. After his death, his wife turned their home in Dedham into a museum of his work. The village pub in Mendham is named after him, as is a street there.

Munnings was portrayed by Dominic Cooper in the film Summer in February, which was released in Britain in 2013.[16] The film is adapted from a novel by Jonathan Smith.

His immensely popular sporting art works have enjoyed popularity in the United States as well as the United Kingdom and elsewhere. Represented by agents Frost & Reed of London while he was alive, Munnings's works were bought by some of the wealthiest collectors of the day. As of 2007, the highest price paid for a Munnings painting was $7,848,000 for The Red Prince Mare, far above his previous auction record of $4,292,500 set at Christie's in December 1999. It was one of four works by Munnings in the auction. The Red Prince Mare is a 40-by-60-inch oil on canvas that was executed in 1921 and had an estimate of $4,000,000 to $6,000,000.