Sir Nikolaus Bernhard Leon Pevsner CBE FBA (30 January 1902 – 18 August 1983) was a German, later British scholar of history of art and, especially, of history of architecture. He is best known for his 46-volume series of county-by-county guides, The Buildings of England (1951–74), often simply referred to by his surname.

The son of a Russian-Jewish fur haulier, Nikolaus Pevsner was born in Leipzig, Saxony. He attended the Thomas School and went on to study art history at the Universities of Leipzig, Munich, Berlin, and Frankfurt/Main, completing a PhD in 1924 on the baroque merchant houses of Leipzig.[1] In 1923, he married Carola ("Lola") Kurlbaum, the daughter of distinguished Leipzig lawyer Alfred Kurlbaum, one year earlier than they had planned after she had become pregnant.[2] He worked as an assistant keeper at the Dresden Gallery (1924–28).

During this period he became interested in establishing the supremacy of German modernist architecture after becoming aware of Le Corbusier's Pavillon de l'Esprit Nouveau at the Paris Exhibition of 1925.[2] In 1928 he contributed the volume on Italian baroque painting to the Handbuch der Kunstwissenschaft, a multi-volume series providing an overview of the history of European art. He taught at the University of Göttingen (1929–33), offering a specialist course on English art and architecture. 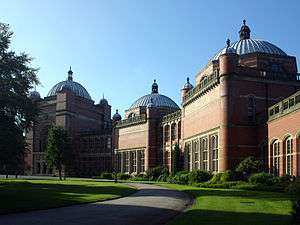 According to biographer Stephen Games, Pevsner welcomed many of the economic and cultural policies of the early Hitler regime.[2][3] However, due to Nazi race laws he was forced to resign his lectureship in 1933.[4] Later that year he moved to England. His first post was an 18-month research fellowship at the University of Birmingham, found for him by friends in Birmingham and partly funded by the Academic Assistance Council.[5] A study of the role of the designer in the industrial process, the research produced a generally critical account of design standards in Britain which he published as An Enquiry into Industrial Art in England (Cambridge University Press, 1937). He was subsequently employed as a buyer of modern textiles, glass and ceramics for the Gordon Russell furniture showrooms in London.

By this time Pevsner had also completed Pioneers of the Modern Movement: from William Morris to Walter Gropius, his influential pre-history of what he saw as Walter Gropius's dominance of contemporary design. Pioneers ardently championed Gropius's first two buildings (both pre–First World War) on the grounds that they summed up all the essential goals of 20th-century architecture; in England, however, it was widely taken to be the history of England's contribution to international modernism, and a manifesto for Bauhaus (i.e. Weimar) modernism, which it was not. In spite of that, the book remains an important point of reference in the teaching of the history of modern design, and helped lay the foundation of Pevsner's career in England as an architectural historian. Since its first publication by Faber & Faber in 1936, it has gone through several editions and been translated into many languages. The English-language edition has also been renamed Pioneers of Modern Design.

Pevsner was "more German than the Germans" to the extent that he supported "Goebbels in his drive for 'pure' non-decadent German art".[6] He was reported as saying of the Nazis (in 1933) "I want this movement to succeed. There is no alternative but chaos.... There are things worse than Hitlerism".[2] Nonetheless he was included in the Nazi Black Book as hostile to the Hitler regime.

In 1940, Pevsner was interned as an enemy alien in Huyton, Liverpool. He was released after three months on the intervention of, among others, Frank Pick, then Director-General of the Ministry of Information. He spent some time in the months after the Blitz clearing bomb debris, and wrote reviews and art criticism for the Ministry of Information's Die Zeitung, an anti-Nazi publication for Germans living in England. He also completed for Penguin Books the Pelican paperback An Outline of European Architecture, which he had begun to develop while in internment. Outline would eventually go into seven editions, be translated into 16 languages, and sell more than half a million copies.

In 1942, Pevsner finally secured two regular positions. From 1936 onwards he had been a frequent contributor to the Architectural Review and from 1943 to 1945 he stood in as its acting editor while the regular editor J. M. Richards was on active service. Under the AR's influence, Pevsner's approach to modern architecture became more complex and more moderate.[7] Early signs of a lifelong interest in Victorian architecture, also influenced by the Architectural Review, appeared in a series written under the pseudonym of "Peter F. R. Donner": Pevsner's "Treasure Hunts" guided readers down selected London streets, pointing out architectural treasures of the 19th century. He was also closely involved with the Review's proprietor, Hubert de Cronin Hastings,[8] in evolving the magazine's theories on Picturesque planning.[9]

In 1942, Pevsner was also appointed a part-time lecturer at Birkbeck, University of London; he would eventually retire from the college in 1969 as its first professor of art history. He lectured at Cambridge for almost 30 years, having been Slade professor there for a record six years from 1949 to 1955, and would also hold the Slade professorship at Oxford in 1968.

Framing all this was his career as a writer and editor. After moving to England, Pevsner had found that the study of architectural history had little status in academic circles, and the amount of information available, especially to travellers wanting to inform themselves about the architecture of a particular district, was limited. Invited by Allen Lane, founder of Penguin Books, for whom he had written his Outline and also edited the King Penguin series,[10] to suggest ideas for future publications, he proposed a series of comprehensive county guides to rectify this shortcoming. Work on the Buildings of England series began in 1945, and the first volume was published in 1951. Pevsner wrote 32 of the books himself and 10 with collaborators, with a further four of the original series written by others. Since his death, work has continued on the series, which has been extended to cover the rest of the United Kingdom, under the title Pevsner Architectural Guides (now published by Yale University Press).[11] After updating and correcting London 1: the Cities of London and Westminster for its reissue in 1962, Pevsner delegated the revision and expansion of further volumes to others, beginning with Enid Radcliffe for Essex (1965).[12] The gazetteer descriptions of revised volumes do not routinely distinguish between Pevsner's original text and any new writing, but more recent books sometimes supply his words in quotation when the revising author's judgement differs, where a building has since been altered, or where the old text is no longer topical.

As well as The Buildings of England, Pevsner proposed the Penguin the Pelican History of Art series (1953– ), a multi-volume survey on the model of the German Handbuch der Kunstwissenschaft, which he would himself edit. Many individual volumes are regarded as classics.

In 1946, Pevsner made the first of several broadcasts on the BBC Third Programme, presenting nine talks in all up to 1950, examining painters and European art eras. By 1977 he had presented 78 talks for the BBC, including the Reith Lectures in 1955 – a series of six broadcasts, entitled The Englishness of English Art,[13] for which he explored the qualities of art which he regarded as particularly English, and what they said about the English national character.[14] His A. W. Mellon Lectures in Fine Art at the National Gallery of Art, Washington, D.C., were published in 1976 as A History of Building Types.

Pevsner was a founding member in 1957 of the Victorian Society, the national charity for the study and protection of Victorian and Edwardian architecture and other arts. In 1964 he was invited to become its chairman, and steered it through its formative years, fighting alongside John Betjeman, Hugh Casson and others to save houses, churches, railway stations and other monuments of the Victorian age. He served for ten years (1960–70) as a member of the National Advisory Council on Art Education (or Coldstream Committee), campaigning for art history to be a compulsory element in the curriculum of art schools. He was elected a Fellow of the British Academy in 1965 and awarded the Gold Medal of the Royal Institute of British Architects in 1967.

Having assumed British citizenship in 1946, Pevsner was awarded a CBE in 1953 and was knighted in 1969 "for services to art and architecture".

Pevsner also received an Honorary Doctorate from Heriot-Watt University in 1975.[15]

His memorial service was held at the Church of Christ the King, Bloomsbury, the following December, with the memorial address being given by Alec Clifton-Taylor, a friend of 50 years. He is buried in the churchyard of St Peter, Clyffe Pypard, in Wiltshire. His younger son, Tom, was a film producer and director who went on to work on several James Bond films.

Papers relating to Pevsner's departure from Germany and efforts to obtain work in England are contained within the archives of the Society for the Protection of Science and Learning (now the Council for Assisting Refugee Academics) in the Bodleian Library. Index to the Catalogue of the SPSL. A substantial collection of his papers is held at the Pevsner archive in the Getty Research Institute, Los Angeles. Nikolaus Pevsner papers, 1919–1979. Research Library at the Getty Research Institute, Los Angeles, California. Documents relating to his various projects for Penguin, including the King Penguin series, the Pelican History of Art and the Buildings of England, are held by the Penguin Archive at the University of Bristol.Papers relating to the work of the Victorian Society during his years as chairman are held by the Victorian Society themselves and the London Metropolitan Archives. (Victorian Society archives)