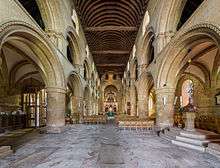 Nave with the font on the right side 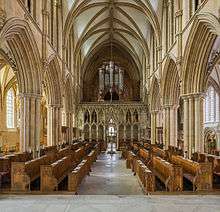 Pulpitum and choir, looking west to the nave

The earliest church on the site is believed to have been founded in 627 by Paulinus, the first Archbishop of York, when he visited the area while baptising believers in the River Trent. The legend is commemorated in the Minster's baptistry window.[4]

In 956 King Eadwig gave land in Southwell to Oskytel, Archbishop of York, on which a minster church was established. The Domesday Book of 1086 recorded the Southwell manor in great detail. The Norman reconstruction of the church began in 1108, probably as a rebuilding of the Anglo-Saxon church, starting at the east end so that the high altar could be used as soon as possible and the Saxon building was dismantled as work progressed. Many stones from this earlier Saxon church were reused in the construction. The tessellated floor and late 11th century tympanum in the north transept are the only parts of the Saxon building remaining intact. Work on the nave began after 1120 and the church was completed by c.1150.

The church was originally attached to the Archbishop of York's Palace which stood next door and is now ruined. It served the archbishop as a place of worship and was a collegiate body of theological learning, hence its designation as a minster. The minster draws its choir from the nearby school with which it is associated.

The Norman chancel was replaced with another in the Early English style in 1234 because it was too small. The octagonal chapter house, built in 1286 with a vault in the Decorated Gothic style has naturalistic carvings of foliage (the 13th-century stonecarving includes several Green Men). The elaborately carved "pulpitum" or choir screen was built in 1350.

The church suffered less than many others in the English Reformation as it was refounded in 1543 by Act of Parliament.

Southwell is where King Charles the First was captured during the English Civil War. The fighting saw the church seriously damaged and the nave is said to have been used as stabling. The adjoining palace was almost completely destroyed, first by Scottish troops and then by the local people, with only the hall of the Archbishop remaining as a ruined shell. The Minster's financial accounts show that extensive repairs were necessary after this period.

On 5 November 1711 the southwest spire was struck by lightning, and the resulting fire spread to the nave, crossing and tower destroying roofs, bells, clock and organ.[5] By 1720 repairs had been completed, now giving a flat panelled ceiling to the nave and transepts.

In 1805 Archdeacon Kaye gave the Minster the Newstead lectern; once owned by Newstead Abbey, it had been thrown into the Abbey fishpond by the monks to save it during the Dissolution of the Monasteries, then later discovered when the lake was dredged.[6] Sir Henry Gally Knight in 1818 gave the Minster four panels of 16th century Flemish glass (which now fill the bottom part of the East window) which he had acquired from a Parisian pawnshop[7]

In danger of collapse, the spires were removed in 1805 and re-erected in 1879–81 when the minster was extensively restored by Ewan Christian, an architect specialising in churches. The nave roof was replaced with a pitched roof[8] and the choir was redesigned and refitted.

Southwell Minster was served by prebendaries from the early days of its foundation. By 1291 there were 16 Prebends of Southwell mentioned in the Taxation Roll.

In 1540 the prebends and minster were suppressed but an act of Parliament in 1543 re-established the college and church collegiate of Southwell. Under an Act of King Edward VI, the prebendaries were given pensions and their estates sold. The minster continued as the parish church on the petitions of the parishioners.

By an Act of Philip and Mary in 1557, the minster and its prebends were restored.[9] On 2 April 1585 a set of statutes was promulgated by Queen Elizabeth I and the chapter operated under this constitution until it was dissolved in 1841. The Ecclesiastical Commissioners made provision for the abolition of the chapter as a whole; the death of each canon after this time resulted in the extinction of his prebend. The chapter came to its appointed end on 12 February 1873 with the death of the Rev Thomas Henry Shepherd, rector of Clayworth and prebendary of Beckingham.[10]

In 1884 Southwell Minster became a cathedral proper for Nottinghamshire and a part of Derbyshire including the city of Derby. The diocese was divided in 1927 and the Diocese of Derby was formed. The diocese's centenary was commemorated by a royal visit to hand out Maundy money. George Ridding, the first Bishop of Southwell, designed and paid for the grant of Arms now used as the diocesan coat of arms. Its creation as a cathedral led to confusion concerning the civic status of Southwell. Traditionally it was considered to be a city because of the presence of the cathedral, but it has not been granted city status.

The Friends of Cathedral Music was founded in 1956 by the Revd. Ronald Sibthorpe prompted by a decision of the provost to abolish Saturday choral evensong so that lay clerks could watch football at Newark-on-Trent.[11] 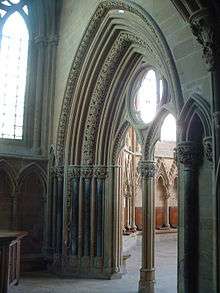 Entrance to the chapter house with the famous carved foliage

The nave, transepts, central tower and two western towers of the Norman church which replaced the Saxon minster remain as an outstanding achievement of severe Romanesque design. The central tower's two ornamental stages place it high among England's surviving Norman towers. The nave is imposing, with cylindrical columns, large triforium arches and an unaltered clerestory with rows of round windows.[12]

The choir is Early English in style. In the 14th century the choir screen and the chapter house were added. The polygonal chapter house and its vestibule comprise a Decorated masterpiece with sculptured detail including heads and naturalistic foliage, the latter being unsurpassed in England. There is the tomb of Archbishop Sandys of York (died 1588).[12]

Much of the worship at the minster is led by the Cathedral Choir, a traditional choir of boys and men, directed by the Rector Chori ("The Ruler of the Choir"), Paul Robert Hale. Choristers are educated at the Minster School, which is unusual among choir schools as it is in the state sector. The choir has attracted international attention when previous head chorister Ben Inman, formed the Choirboys, a "boy band" comprising three cathedral choristers. There is a girls' choir and the adult Minster Chorale. The minster follows the rites of the Church of England and uses the 1662 Book of Common Prayer for Choral Eucharist on Sunday.

In recent years, the choir has broadcast on BBC Radio 3, recorded CDs, toured in Europe, filmed Christmas programmes and given world premières of specially commissioned works such as Paul Patterson’s Southwell Millennium Mass. The choir has appeared before the Queen, sung with the Royal Philharmonic Orchestra, the Orchestra of St John's, Smith Square and the London Festival Orchestra. In 2003 the Minster Choir joined the choirs of Westminster Cathedral and St Albans Cathedral for a concert in the St Albans International Organ Festival. Former Prime Minister Sir Edward Heath wrote "I cannot recall a more impressive programme of church music in many recent years. My deepest congratulations for an evening the richness of which will last for ever".

There are usually 16 choristers in the Cathedral Choir. As with most choirs there is a hierarchical ranking system, in this case of Head Chorister; Deputy Head Chorister; Corner Boys; Senior Singing Boys; Junior Singing Boys and Probationers. The ranks of corner boy upwards are entitled to wear a 'tippet', a very short red cloak which is worn over the surplice. There are also Juniors who do not sing with the full choir, but are training to become full choristers.

There are six full-time professional lay clerks in the choir supplemented by six men on alternate Sunday evenings and on special occasions, expanding the repertoire and force of the choir. The lay clerks often perform in their own right in services.

The Minster Girls’ Choir was formed in February 2005 by the Assistant Organist Simon Bell. It is made up of 18 choristers, under the direction of Simon Hogan. The girls are drawn from the Minster School. They sing at the 9.30am Family Eucharist on Sundays once per month and at Evensong every Monday at 5.45pm.

The choir’s repertoire consists of music written for upper voices and includes music by composers such as Jean Langlais, Charles Wood and George Dyson. In September 2007, the choir sang a commissioned anthem by Andrew Parnell, a former chorister at Southwell, as part of the service of installation of the Dean. The choir's first tour was to Stavanger in Norway in October 2009, followed by another in 2013 to Amsterdam. In 2011 it released a CD, Christus Rex - a selection of music from Lent to Ascension, including Leighton's Easter Sequence, directed by Philip White-Jones and accompanied by Jonathan Turner with Richard Pratt, trumpet.

The Minster Chorale is an adult choir that sings at services throughout the year. It consists of up to thirty members who rehearse on Friday evenings. Currently directed by the Assistant Director of Music, the chorale was founded in 1994 by Philip Rushforth and Paul Hale.

The choir sings a cross-section of the whole repertoire of traditional cathedral music, including works by Palestrina, Byrd, Mozart, Stanford and Howells. It deputises for the Minster Choir at half-term, and sings at many evening Eucharist services on high feast days, such as Ash Wednesday, Maundy Thursday and Ascension Day. The Chorale takes its share of Christmas duties, singing at Midnight Mass.

The chorale is invited to perform occasional concerts and services away from the minster. It has sung in Rievaulx Abbey, St Mary’s Collegiate Church in Warwick and Uppingham Parish Church. In July 2005, the chorale sang a services at Christ Church Cathedral, Dublin. In summer 2011, it joined with the Voluntary Choir of Rochester Cathedral to celebrate the music of Rochester composers such as Robert Ashfield, Barry Ferguson and Percy Whitlock.