Skippy is a 1931 American Pre-Code comedy film. The screenplay by Joseph L. Mankiewicz, Don Marquis, Norman Z. McLeod, and Sam Mintz was based on the comic strip Skippy by Percy Crosby.

The film stars Jackie Cooper, Robert Coogan, Mitzi Green and Jackie Searl. Director Norman Taurog won the Academy Award for Directing (at age 32, he remains the youngest winner in this category). The film also did well enough to inspire a sequel called Sooky (1931). The film was released on April 5, 1931, by Paramount Pictures.[1][2] For his performance, Cooper, at the age of nine, also became the youngest person to earn an Academy Award nomination for Best Actor in a Leading Role.

This film was going to be one of Universal's first Manufacture on Demand (MOD) titles, but was withdrawn from retail sale without explanation. It has yet to be announced as an MOD title. 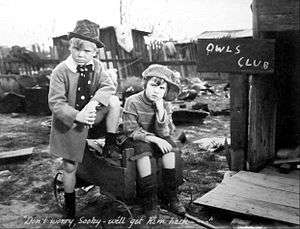 Skippy (Jackie Cooper) is the feisty son of the strict Dr. Herbert Skinner (Willard Robertson) and his wife Ellen (Enid Bennett). Skinner forbids his son Skippy to play in the pauperized Shantytown, because of the unhygenical and criminal surroundings there. But Skippy and his friend Sidney (Jackie Searl) still go to Shantytown where Sidney meets a new boy named Sooky (Robert Coogan, Jackie Coogan's little brother). He saves the small boy Sooky from the much bigger bully Harley Nubbins (Donald Haines). Skippy and Sooky become friends. One day Harley accidentally breaks the windshield of his father's car with Skippy's yo-yo. Harley, who has a very aggressive and brute father, blames it on Skippy and Sooky. Mr. Nubbins (Jack Rube Clifford), who works as a dog catcher, takes Sooky's dog and demands that they pay him for the damages if they want their dog back. The boys gather three dollars by breaking Skippy's savings bank, but Mr. Nubbins accepts it only for his windshield. He gives them three days to get another three dollars for a dog license and he threatens that he'll kill their dog if they don't get the money.

Sooky and Skippy spend the next two days selling bottles, lemonade and wood, and staging a performance to earn money. Skippy's father doesn't want to lend them the remaining thirty cents. Then Mr. Dubbins kills their dog and Skippy blames his father for it. The next morning, Skippy gets a new bicycle from his father. But he trades the bicycle to his friend, Eloise (Mitzi Green), for her new dog. Skippy takes the dog to Sooky. Dr. Skinner has a change of heart and buys Sooky a licensed dog, finds his mother a job, and refrains from ordering Shantytown destroyed, instead offering assistance to its citizens. For the first time, Dr. Skinner plays with Skippy in Shantytown. There they accidentally break Mr. Nubbins' new windshield. Dr. Skinner wins a fight against Mr. Nubbins and shows that he is a good father.

In the scene where the dog dies, director Norman Taurog needed to get his nephew, Jackie Cooper, to cry, so he told young Jackie that he was going to kill his own dog. Jackie did the scene and proceeded to find out his dog would be unharmed. From this point on, Jackie Cooper had mixed feelings toward his uncle, almost to the point of hatred, and rarely spoke to him again.