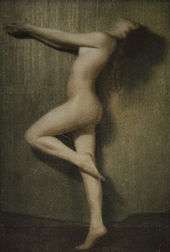 Karl Struss, A.S.C. (November 30, 1886 – December 15, 1981) was an American photographer and a cinematographer of the 1900s through the 1950s. He was also one of the earliest pioneers of 3-D films. While he mostly worked on films, such as F. W. Murnau's Sunrise: A Song of Two Humans and Charles Chaplin's The Great Dictator and Limelight, he was also one of the cinematographers for the television series Broken Arrow and photographed 19 episodes of My Friend Flicka.

He was born in New York, New York, in 1886, and attended Columbia University,[1] graduating with a B.A. in 1912. He studied photography with Clarence H. White, a faculty member at Columbia. Initially, his reputation gained attention when twelve of his pictorial works were chosen for the Albright Art Gallery International Exhibition of Pictorial Photography by Alfred Stieglitz in 1910. This was the final exhibition of the Photo-Secession, an organization that promoted photography as fine art. .[2] As Struss continued his work and exhibitions, he produced commercial photography for magazines including Vogue, Vanity Fair, and Harper's Bazaar.[2] (However, he was quick to insist that he was not doing fashion photography.)

Struss invented the Struss Pictorial Lens, a soft-focus lens, in 1909. This lens was considered popular with pictorial photographers of the time. The Struss Pictorial lens was the first soft-focus lens introduced into the motion picture industry in 1916.[2] In 1919, he moved to Los Angeles and signed on with Cecil B. DeMille as a cameraman and subsequently worked on many films.[2] Struss was later admitted to the American Society of Cinematographers, and was a founding member of the Academy of Motion Picture Arts.[3] In 1949, he began his work in "stereo cinematography", becoming one of the first proponents of that art form. Unfortunately, he did most of his 3D work in Italy and none of his films were subsequently released in 3D in the United States.

Struss's photographic archive of exhibition prints, film stills, negatives and papers is available at the Amon Carter Museum of American Art located in Fort Worth, TX.[2]

In his career, Struss was nominated for an Academy Award for Best Cinematography four times. The first time, and the only time he won, was for F. W. Murnau's Sunrise: A Song of Two Humans in 1929, sharing that award with Charles Rosher. He was nominated again in 1932 for Dr. Jekyll and Mr. Hyde, in 1934 for The Sign of the Cross, and in 1942 for Aloma of the South Seas with Wilfred M. Cline, A.S.C. and William E. Snyder, A.S.C.