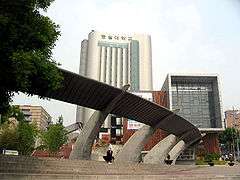 Soongsil University (SSU) is a private Christian university in South Korea. The campus is located in 369 Sangdo-ro, Dongjak-gu, Seoul.

Soongsil University was founded on October 10, 1897, in Pyongyang as a private school by William M. Baird, a missionary of the Presbyterian Church in the U.S.A. Board of Foreign Missions. In 1900 the school was developed into an official 4-year junior high school. In October 1901 the school was named Soongsil Hakdang (숭실학당, Soongsil Academy). The name Soongsil roughly means "Revering [God] (숭 soong) with Truth and Integrity (실 sil)".

In 1905 the academy established courses for students. In 1906 the academy again was permitted by presbyterian and Methodist missionary bodies to establish a university department. The academy was called Union Christian College (합성숭실대학), which was later authorized as a university by the Korean government in 1907.[1]

In 1925 the school was forcibly reduced to a 4-year technical school of humanities named 숭실전문학교 (崇實專門學校, pronounced Sūjitsu Senmon Gakkō in Japanese).[2] On March 4, 1938 the school closed itself in order to protest against the enforcement of Shinto shrine worship.

In August 1945 Korea was liberated from Japanese colonialism, but the effort to restore the Soongsil College did not succeed until after the end of the Korean War. In April 1954 Soongsil College was reestablished in South Korea and in June 1957 it moved to the present-day Sangdo-dong Campus. In 1971 the College was merged with Daejun College (대전대학, 大田大學, not to be confused with present-day Daejeon University) into Soongjun College (숭전대학, 崇田大學).[3] In December 1971 the College acquired a university status. In December 1982, Daejeon Campus of Soongjun University was separated and renamed Hannam University. In November 1986, Soongjun University was renamed Soongsil University.

Soongsil's IT sector and business school is especially strong. The first computer science department in Korea was founded here and the department is currently ranked second in Korea after Seoul National University in the field of computer science. According to JoongAng Ilbo, a Korean newspaper, as of 2011 it ranked 22nd overall in the national rankings. Also in 2012 and 2013 it was the 16th university with the biggest number of graduates with a CPA.