SpamAssassin is a computer program used for e-mail spam filtering. SpamAssassin uses a variety of spam-detection techniques, including DNS-based and fuzzy-checksum-based spam detection, Bayesian filtering, external programs, blacklists and online databases. It is released under the Apache License 2.0 and is now part of the Apache Foundation.

The program can be integrated with the mail server to automatically filter all mail for a site. It can also be run by individual users on their own mailbox and integrates with several mail programs. SpamAssassin is highly configurable; if used as a system-wide filter it can still be configured to support per-user preferences.

SpamAssassin was created by Justin Mason, who had maintained a number of patches against an earlier program named filter.plx by Mark Jeftovic, which in turn was begun in August 1997. Mason rewrote all of Jeftovic's code from scratch and uploaded the resulting codebase to SourceForge.net on April 20, 2001. In summer 2004 the project became an Apache Software Foundation project and later officially renamed to Apache SpamAssassin. The project involved algorithms developed in part by Gary Robinson and others.[4][5][6]

SpamAssassin is a Perl-based application (Mail::SpamAssassin in CPAN) which is usually used to filter all incoming mail for one or several users. It can be run as a standalone application or as a subprogram of another application (such as Milter, SA-Exim, Exiscan, MailScanner, MIMEDefang, Amavis) or as a client (spamc) that communicates with a daemon (spamd). The client/server or embedded mode of operation has performance benefits, but under certain circumstances may introduce additional security risks.

Typically either variant of the application is set up in a generic mail filter program, or it is called directly from a mail user agent that supports this, whenever new mail arrives. Mail filter programs such as procmail can be made to pipe all incoming mail through SpamAssassin with an adjustment to user's .procmailrc file. 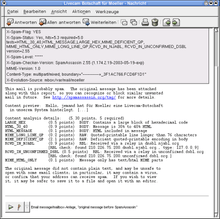 SpamAssassin comes with a large set of rules which are applied to determine whether an email is spam or not. Most rules are based on regular expressions that are matched against the body or header fields of the message, but SpamAssassin also employs a number of other spam-fighting techniques. The rules are called "tests" in the SpamAssassin documentation.

Each test has a score value that will be assigned to a message if it matches the test's criteria. The scores can be positive or negative, with positive values indicating "spam" and negative "ham" (non-spam messages). A message is matched against all tests and SpamAssassin combines the results into a global score which is assigned to the message. The higher the score, the higher the probability that the message is spam.

SpamAssassin has an internal (configurable) score threshold to classify a message as spam. Usually a message will only be considered as spam if it matches multiple criteria; matching just a single test will not usually be enough to reach the threshold.

If SpamAssassin considers a message to be spam, it can be further rewritten. In the default configuration, the content of the mail is appended as a MIME attachment, with a brief excerpt in the message body, and a description of the tests which resulted in the mail being classified as spam. If the score is lower than the defined settings, by default the information about the tests passed and total score is still added to the email headers and can be used in post-processing for less severe actions, such as tagging the mail as suspicious.

SpamAssassin allows for a per-user configuration of its behaviour, even if installed as system-wide service; the configuration can be read from a file or a database. In their configuration users can specify individuals whose emails are never considered spam, or change the scores for certain rules. The user can also define a list of languages which they want to receive mail in, and SpamAssassin then assigns a higher score to all mails that appear to be written in another language.

SpamAssassin is based on heuristics (pattern recognition), and such software exhibits some false positives, blocking email that may be entirely innocent, hence the need for the software to go through a "learning" exercise. This is similar to heuristic software utilized by credit card issuing banks that will block a credit card number based upon "suspicious" usage patterns, such as a large number of purchases made within a short time period. As there is no way to tell the "bad guys" from the "good guys" with one-hundred-percent accuracy, there are going to be mistakes made determining the appropriate category for some email.[7]

More methods can be added reasonably easily by writing a Perl plug-in for SpamAssassin.

SpamAssassin by default tries to reinforce its own rules through Bayesian filtering, but Bayesian learning is most effective with actual user input. Typically, the user is expected to "feed" example spam mails and example "ham" (useful) mails to the filter, which can then learn the difference between the two. For this purpose, SpamAssassin provides the command-line tool sa-learn, which can be instructed to learn a single mail or an entire mailbox as either ham or spam.

Typically, the user will move unrecognized spam to a separate folder for a while, and then run sa-learn on the folder of non-spam and on the folder of spam separately. Alternatively, if the mail user agent supports it, sa-learn can be called for individual emails. Regardless of the method used to perform the learning, SpamAssassin's Bayesian test will assign a higher score to e-mails that are similar to previously received spam (or, more precisely, to those emails that are different from non-spam in ways similar to previously received spam e-mails).

sa-compile is a utility distributed with SpamAssassin as of version 3.2.0. It compiles a SpamAssassin ruleset into a deterministic finite automaton that allows SpamAssassin to use processor power more efficiently.