This article is about the website. For other uses, see SourceForge (disambiguation).

SourceForge is a Web-based service that offers software developers a centralized online location to control and manage free and open-source software projects. It provides a source code repository, bug tracking, mirroring of downloads for load balancing, a wiki for documentation, developer and user mailing lists, user-support forums, user-written reviews and ratings, a news bulletin micro-blog for publishing project updates, and other features.

SourceForge was one of the first to offer this service free of charge to open source projects.[3] Since 2012 the website runs on Apache Allura software. SourceForge offers free access to hosting and tools for developers of free / open-source software, competing with other providers such as GitHub, Bitbucket, RubyForge, Tigris.org, BountySource, Launchpad, BerliOS, JavaForge, GNU Savannah, and GitLab.

As of March 2014, the SourceForge repository claimed to host more than 430,000 projects and had more than 3.7 million registered users.[4] The domain sourceforge.net attracted at least 33 million visitors by August 2009 according to a Compete.com survey.[5]

From mid-2013 SourceForge introduced a program called DevShare, which offered projects a way to monetize their downloads by having an optional download that includes prompts for the user to download additional software that is not part of the project. Negative community reactions to the partnership program led to review of the program, nonetheless, the program was opened up to all SourceForge projects on February 7, 2014.[6][7]

The program was cancelled by new owners BizX on February 9th, 2016;[8] on May 17th, 2016 they announced that it would scan all projects for malware and display warnings on downloads.[9]

SourceForge is a web-based source code repository. It acts as a centralized location for free and open-source software projects. It was the first to offer this service for free to open-source projects. Project developers have access to centralized storage and tools for managing projects, though it is best known for providing revision control systems such as CVS, SVN, Bazaar, Git and Mercurial.[10] Major features (amongst others)[11] include project wikis, metrics and analysis, access to a MySQL database, and unique sub-domain URLs (in the form http://project-name.sourceforge.net).

The vast number of users at SourceForge.net (over 3 million as of 2013)[5] exposes prominent projects to a variety of developers and can create a positive feedback loop. As a project's activity rises, SourceForge.net's internal ranking system makes it more visible to other developers through SourceForge directory and Enterprise Directory.[12][13] Given that many open-source projects fail due to lack of developer support, exposure to such a large community of developers can continually breathe new life into a project.

SourceForge's traditional revenue model is through advertising banner sales on their site. In 2006 SourceForge Inc. reported quarterly takings of US$6.5 million.[14] In 2009 SourceForge reported a gross quarterly income of US$23 million through media and e-commerce streams.[15] In 2011 a revenue of 20 million USD was reported for the combined value of the SourceForge, slashdot and freecode holdings, prior to SourceForge's acquisition.[16]

Since 2013 additional revenue generation schemes, such as bundleware models,[17] were trialled, with the goal of increasing SourceForge's revenue. The result has in some cases been the appearance of malware bundled with SourceForge downloads.[18] On February 9, 2016, SourceForge announced they had eliminated their DevShare program practice of bundling installers with project downloads.[19]

SourceForge, founded in 1999 by VA Software, was the first provider of a centralized location for free and open-source software developers to control and manage software development and offering this service without charge.[3] The software running the SourceForge site was initially free software. The last release under a free license was made in November 2001; SourceForge was later powered by the proprietary SourceForge Enterprise Edition.[20]

In 2009 SourceForge announced a new site platform known as Allura, which would be an extensible, open source platform licensed under the Apache License, utilizing components such as Python and MongoDB, and offering REST APIs.[25] In June 2012 the Allura project was donated to the Apache Software Foundation as Apache Allura[26][27]

In September 2012 SourceForge, Slashdot, and Freecode were acquired from Geeknet by the online job site Dice.com for $20 million, and incorporated into a subsidiary known as Slashdot Media.[28][29] On September 26, 2012, it was reported that attackers had compromised a SourceForge mirror, and modified a download of phpMyAdmin to add security exploits.[30]

Some of SourceForge's monetization practices have been met with criticism by developers and end users. 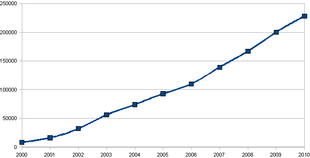 In July 2013 SourceForge announced that it would provide project owners with an optional feature called DevShare, which places closed-source ad-supported content into the binary installers and gives the project part of the ad revenue.[35] Opinions of this new feature vary, with some complaining about users not being as aware of what they are getting or being able to trust the downloaded content, whereas others see it as a reasonably harmless option that keeps individual projects and users in control.[36]

In November 2013 GIMP, a free image manipulation program, removed its download from SourceForge, citing misleading download buttons that potentially confuse customers, as well as SourceForge's own Windows installer, which bundles potentially unwanted programs. In a statement, GIMP called SourceForge a once "useful and trustworthy place to develop and host FLOSS applications" that now faces "a problem with the ads they allow on their sites ..."[37][38][39]

In response to the DevShare adware many users and projects migrated to GitHub, other software hosting facilities, or self-host their software.[40][41] In May 2015 SourceForge took control of pages for five projects that had migrated to other hosting sites and replaced the project downloads with adware-laden downloads.[42] Community concerns triggered a prompt review of SourceForge mirroring program, and third-party bundling of mirrored content was discontinued on May 27, 2015.[42]

After SourceForge was sold to BizX in 2016, DevShare was discontinued.[43][44] On May 17, 2016, SourceForge announced that they were now scanning all projects for malware, and displaying warnings on projects detected to have malware.[45]

GIMP, who discontinued their use of SourceForge as a download mirror in November 2013,[37][46] reported in May 2015 that SourceForge was hosting versions of their Windows binaries that "put other software apart from GIMP on our users' systems" on their Open Source Mirror directory,[47][48] which SourceForge claims is a collection of abandoned projects.[49][50] This came despite SourceForge's commitment in November 2013 to never bundle adware with project downloads without developers' consent.[46][47][51] GIMP said "To us, this firmly places SourceForge among the dodgy crowd of download sites."

Project of the Month

Since 2002 SourceForge features a Project of the Month.[56]

As of May 2013, the SourceForge repository hosted more than 300,000 projects and had more than 3 million registered users,[57] although not all were active. The domain sourceforge.net attracted at least 33 million visitors by August 2009 according to a Compete.com survey.[5]

In its terms of use,[58] SourceForge states that its services are not available to users in countries on the sanction list of the U.S. Office of Foreign Assets Control (including Cuba, Iran, North Korea, Sudan and Syria). Since 2008 the secure server used for making contributions to the site has blocked access from those countries. As of January 2010 the site had blocked all access from those countries, including downloads. Any IP address that appeared to belong to one of those countries could not use the site.[59] A month later SourceForge relaxed the restrictions so that individual projects could indicate whether or not SourceForge should block their software from download to those countries.[60]